Accessibility links
Electoral Map Shifts In Conventions' Wake As of Sept. 9, Barack Obama still has a lead in the electoral map. But it's a lot smaller than it was two months ago. And new polls show John McCain's choice of Sarah Palin as a running mate is helping the GOP ticket in some key battleground states. 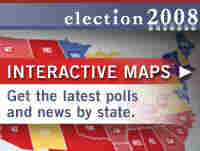 Get NPR's Electoral Map Outlook, Plus The Latest Polls 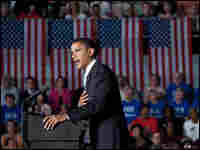 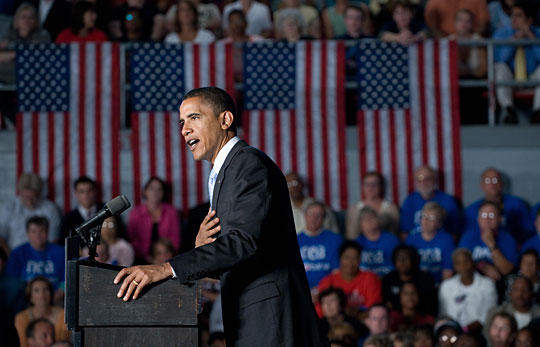 Now that the national conventions are over and John McCain and Barack Obama have chosen their running mates, it's time to take a fresh look at the battleground states.

But what are those states?

For a while it looked as if this would be a year when Obama, riding a Democratic wave, could compete in a host of previously reliably Republican states: Virginia, North Carolina, Georgia, Montana, even Alaska were on his list, in addition to the old standbys of Ohio, Michigan, Pennsylvania and Florida.

But as the dust settles from the conventions, the map appears to be shifting back to a more traditional configuration.

Here's a look at which states are in play at this moment in the race. For the purposes of this post, we define battleground state as one where current statewide polling shows the race to be within the margin of error, which is usually 5 points or less.

The Northeast is traditionally Democratic territory, and with the exception of New Hampshire and Pennsylvania, that is still the case.

In statewide polling, Obama and McCain are tied in New Hampshire. And it's a real battleground this year for two reasons. The state itself has been turning blue: John Kerry won it in 2004, and in 2006 Democrats knocked off both Republican House members, re-elected a governor by a record margin and took control of the state Legislature for the first time in more than a century.

This year, Republican Sen. John Sununu is fighting for his political life. But John McCain has deep roots in the state, having won the Republican presidential primary there in both 2000 and 2008.

Pennsylvania is a state that Obama can't afford to lose — and he does have a small lead there. But he lost the state's April primary to Hillary Clinton by nearly 10 points. The McCain camp feels its "Wal-Mart mom" VP candidate, Sarah Palin, has made its ticket more competitive with the white working-class voters in places like Scranton that have been so hard for Obama to win over.

North Carolina and Georgia are about to fall off the battleground list now that the Republican base has solidified. But Florida, the uber-battleground from 2000, is still very competitive. McCain has a small lead there, and Republicans are very confident of holding it. But Obama is spending lots of money in the state (he did not compete there in the primaries). And this week, Hillary Clinton campaigned in Florida on his behalf.

Virginia is brand new to the battleground list this year, and the candidates are tied there. The state should be tailor-made for McCain — it hasn't voted for a Democrat in a presidential race since 1964. But the state seems to be in the process of turning blue. It replaced a Republican senator with a Democrat two years ago and seems primed to do it again this year. Democrats have also won back-to-back gubernatorial races. Obama has hired a lot of the same people who won the state for Mark Warner (the former governor who is expected to win a Senate race in November) and Tim Kaine (the current governor), and he has built a huge ground organization there.

Ohio is always a battleground state, and this year is no exception. McCain can't win without it — no Republican ever elected president has. Current polling shows the Ohio race to be a tie. The bad economy and Democratic gains in 2006 make Democrats cautiously optimistic about the state. But Palin has helped McCain energize the Republican base that pulled Ohio through in a squeaker for George W. Bush in 2004.

Palin and McCain are focusing on Michigan as a possible state they could pick up from Democrats. It's one the GOP hasn't carried since 1988. But Obama has a small lead there. The resignation of Detroit's embattled African-American mayor has removed a distraction for the Obama campaign.

The Rocky Mountain West is a huge battleground this year. The Democrats decided to hold their convention in Colorado for a reason: The race there is tied, with both candidates spending lots of time and money. Bush won the state in 2000 and 2004, but Democrats believe Colorado is slowly becoming more hospitable for Obama. He's also got a small lead in New Mexico, while McCain has a tiny lead in Nevada. All three states will see a lot of both candidates by Nov. 4.

Democrats had hoped to compete in Alaska, given that Republican Sen. Ted Stevens is under indictment and Republican Congressman Don Young is under FBI investigation. But Sarah Palin puts the state back where it has traditionally been — in the GOP column.

On the other hand, while Washington and Oregon were once considered swing states, at this time, Obama's lead in both is outside the margin of error.

As of Sept. 9, Obama still has a lead in the electoral map. But it's a lot smaller than it was two months ago. Still, whatever effect the addition of Palin has made to the equation may change several times between now and Oct. 2, when she and Joe Biden hold their VP debate in St. Louis.