Accessibility links
Q&A: The Big Bang Machine Physicists have thrown the switch on what is arguably the most powerful and most complex science experiment ever conducted. A look at what they're hoping to find inside the subatomic smashup soon to start in Switzerland. 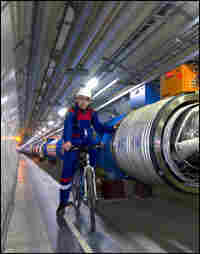 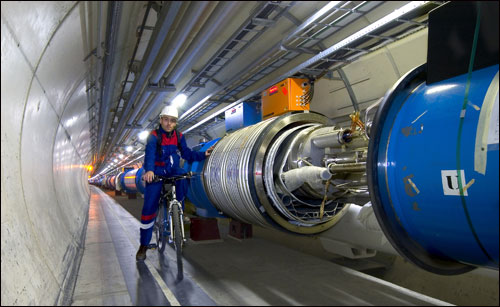 CERN staffers use bikes to travel through the Large Hadron Collider's 17-mile tunnel.

The first test beams of protons will be sent Wednesday through tunnels in a multi-billion dollar machine.

Later this fall, the Large Hadron Collider will begin smashing subatomic particles together so that scientists can search through the wreckage for clues about the early universe.

Read More About Day One Of The Experiment

Physicists threw the switch Wednesday on what is arguably the most powerful and most complex science experiment ever conducted.

It's an underground ring of superconducting magnets, reaching from Switzerland into France, that will smash together subatomic particles with terrifying force.

For the next month, scientists will be testing the ability to send beams of protons around the 17-mile tunnel at the international CERN laboratory. The Large Hadron Collider will push these proton beams close to the speed of light.

The first actual collisions may begin in about a month, when proton beams traveling in opposite directions are brought together.

When the experiment is fully operational, collisions will occur 600 million times every second, producing a spray of subatomic debris. Scientists hope this debris will resemble conditions close to those just after the big bang, the theorized colossal explosion that created the universe.

Somewhere in that subatomic smashup haystack, physicists may find the following needles:

What do we think it does?

It gives things mass. The Higgs particle, named after physicist Peter Higgs, would be a companion to an (also hypothetical) Higgs "field." The field would pervade the universe and act like cosmic molasses, making everything hard to move. That's what we call mass.

Why do we need it?

Without the Higgs particle, electrons would have no mass and atoms wouldn't stick together. We would fall apart into piles of atomic nuclei.

How likely is it that it's real?

High. Physicists generally agree the Higgs or something like it must exist.

How hard would it be to find?

It depends on the Higgs particle's characteristics. Scientists think the Higgs doesn't live long and quickly decays into other particles. Depending on what those are, physicists might be able to pick out Higgs fingerprints quickly, or it could take years of sifting through data.

Dark matter is the name given to the mysterious invisible material that seems to hang around galaxies. Estimates are that 20 percent of the stuff in the universe is dark matter. Astronomers call it dark because they can't see it.

If it's invisible, how do you find it?

You don't — or at least not directly. If the LHC makes dark matter particles, they will escape without leaving a trace. But physicists are prepared. They should be able to notice its absence.

What is the likelihood it will appear?

Unclear. Many physicists believe that dark matter particles are part of a whole family of new particles. This theory, known as Supersymmetry (SUSY), says that every known particle has a heavier sibling. The problem is, no one has ever observed one of these hefty partners.

Should I be worried?

How do you detect one?

A miniature black hole would collapse and can create all particle types that exist.

What is the likelihood mini black holes really will appear?

Physicists agree they're a long shot. Miniature black holes appear in some theories that say there are extra, tiny dimensions to space-time. And while the idea of extra dimensions is popular — as part of something called string theory for instance — they don't necessarily allow for mini black holes.