Accessibility links
An Autistic Student's Journey To College Roger Diehl has battled learning disabilities and depression all his life. As a child, he had the constant support of his parents. Now as a college freshman, it's an anxious time for him and his parents. But they are well-prepared for the transition. 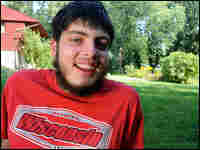 Roger Diehl, photographed at his grandmother's house in Madison, Wis., on Sept. 1. Diehl, now a freshman at the University of Wisconsin, has battled mental illness and developmental disorders throughout his life. Jerome De Perlinghi for NPR hide caption 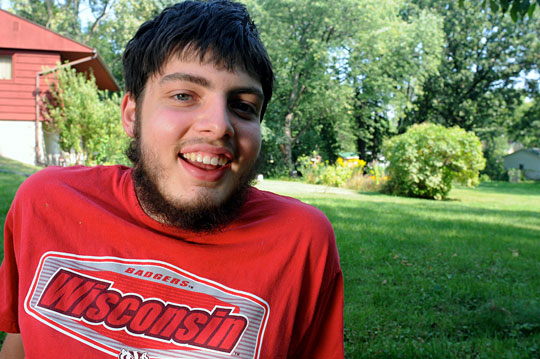 Roger Diehl, photographed at his grandmother's house in Madison, Wis., on Sept. 1. Diehl, now a freshman at the University of Wisconsin, has battled mental illness and developmental disorders throughout his life.

Roger Diehl, a college freshman with Asperger's and depression, and his mother, Sita Diehl, answer questions about what parents and education specialists can do to help kids with learning disabilities or mental illness make a strong transition to college. 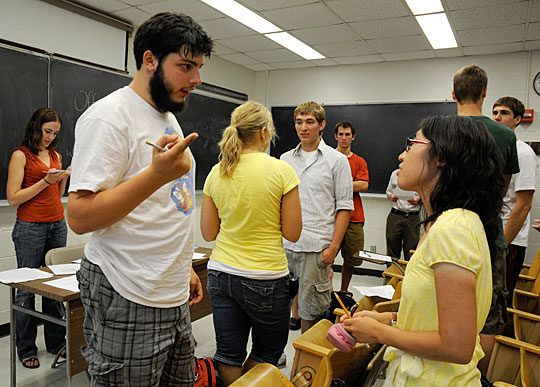 Roger Diehl in chemistry class talking to Hae Yoon Chang, his chemistry lab partner. This was Roger's first day of classes on Sept. 2. 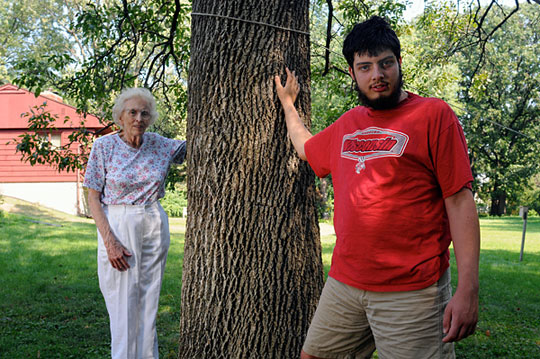 Diehl answers a question in calculus class on the first day of his classes. Jerome De Perlinghi for NPR hide caption 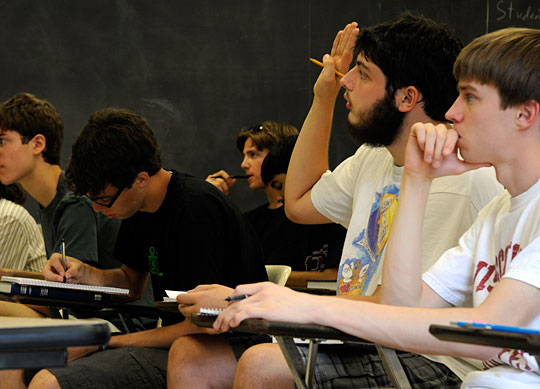 Diehl answers a question in calculus class on the first day of his classes.

Sending your child off to college can be an anxious time for many parents. But for parents of children with a mental illness or learning disability, the transition is especially challenging. One worry is that parents of adult children have no legal standing in their medical care. In Nashville, Tenn., the Diehl family has worked hard to prepare their son for the move from home to college.

Roger Diehl turned 18 in May. He is a freshman at the University of Wisconsin-Madison. Throughout high school, Roger was an A-student, despite having serious mental health challenges throughout his childhood. He has suffered from clinical depression. He has attention-deficit hyperactivity disorder (ADHD) and Asperger's, a form of autism.

"I'm autistic, so it's a bit tough for me to interact socially," he says.

"Looking people in the eye is not natural to me. I had to learn it. And I also, especially earlier in my childhood, had some pretty bad depressive episodes."

Roger's mother, Sita Diehl, says she first began seeing signs of her son's depression when he was 3.

"I was worried about him, because he was beginning to say that he wanted to kill himself," she says. "He would get very, very angry and frustrated and he would say 'I don't want to be here anymore.'"

Roger says he wasn't actually thinking about ways to commit suicide; he was just thinking it would be a good thing to do. Then, when he turned 6 or 7, his mother remembers him asking specifically about methods of suicide: How long it would take to suffocate if he put a plastic bag over his head; Or, if he jumped out of the car into traffic, would he be killed for sure?

It was at that point that the Diehls got psychiatric help for their son. As a 7-year-old, Roger was put on the anti-depressant Prozac, and he's been on the medication ever since.

"I'm currently on 10mg of Prozac a day and 40 of Ritalin in high-stress situations, because I also have ADHD," Roger says.

Roger did not try to hide his mental health problems when he applied for college. He wrote about his illness in his Merit Scholarship application.

"One of the greatest challenges I've overcome has been my autism," he wrote.

His teachers also mentioned his autism in their letters of recommendation. His applications were successful. He was a finalist for a National Merit Scholarship, and he was accepted at several colleges.

When he chose the University of Wisconsin, his family knew that he would need support to attend a college away from home. Sita Diehl is the executive director of Tennessee's National Alliance for Mental Illness, in Nashville. Her work with families there prepared her for Roger's move.

"For many years, I've heard families talk about how their child was at the top of his class, and he was just wonderful, and then he went off to college, and everything fell apart," she says. "And so I was determined that we were going to learn from experience."

"Whether or not it was something that Roger needed, we were going to build a bridge for a gradual launch, rather than just pushing him out of the nest."

One of the reasons the Diehls chose the University of Wisconsin over other colleges was because of their social support network in Madison.

"For the first year, Roger's going to be living with his grandmother, just to make that transition gently. And his favorite cousin lives there, and so he'll have a ready-made social system."

How Parents Can Help

All families face a legal transition when their child turns 18. Roger is now a legal adult. As a result, his parents no longer have the legal right to be involved in his medical care, even though they know he is at risk for depression and suicide.

The family has prepared for this, too.

Sita Diehl has already found a psychiatrist in Madison for Roger; Roger and his family have also consulted a lawyer. The lawyer recommended that Roger needed to give someone financial power of attorney over his affairs. Roger chose to give the power of attorney to his grandmother.

The lawyer also recommended that Roger appoint a power of attorney for both his mental health care and his health care, draft a living will and sign a HIPAA release.

A HIPAA release refers to the "Health Insurance Portability and Accountability Act," a federal law that protects the privacy of an adult's medical information.

By signing a HIPAA release, Roger agreed to let his parents remain involved in his medical care, as they had been when he was a dependent. For parents of adult children with mental illnesses, a HIPAA release is critical.

"I've heard so many parents say that at the age of 18, the wall comes down and it's a real shock. Suddenly, people we've been talking to for years can't talk to us anymore," Sita Diehl says.

"They're very, very reluctant to give information. And you do have to wave this paper in front of them and say, 'This was signed by the patient when he was making good decisions.'"

In addition, Roger is working on an Advanced Directive with his grandmother, documenting what kinds of medical interventions he wants if he becomes incapacitated. And for Roger, who suffers with chronic, severe depression, becoming incapable of making good medical decisions is a real concern.

"He'll work out what he wants, and where he wants to go, and how he wants to be treated, and what medications, and that kind of thing, if he becomes incapacitated. I really don't think Roger will get into that state, but if he did, it would at least be there as a safety net," Sita Diehl says.

"It feels a lot better than not having my family know about what sorts of treatment I'm getting if I'm determined to not have capacity," Roger says.

"I'd rather have them know and be able to make decisions, than the doctors making decisions by themselves."

And Roger says he doesn't feel that his independence is being curtailed by his parents.

"I actually feel that it's adding to my independence, because I feel they'll be more responsive to my wishes than someone I don't know."

Sita Diehl also recommends one more important step, and that's to check in with the university's Office of Disability.

"Go into the office and say. 'I'm here. This is my disability. I don't need you right now. But at least you know I'm here.'"

"I think the important thing is not to just hope it'll all work out," she says. "But to look at the potential challenges and take steps as far as you can, and do that planning together. And set them up for success as much as possible," Sita Diehl says. Her son agreed.

Roger plans to major in biochemistry. He says he's very excited about the rigorous academic load ahead of him and the sheer wonder of learning new things. He is a remarkable young man, with a family supporting him, and preparing him to go off to college and thrive, while living with the challenges of mental disabilities.