Accessibility links
Physicists Revving World's Most Powerful Smashup The first test beams of protons were sent through tunnels in a multibillion-dollar machine Wednesday. Later this fall, the Large Hadron Collider will begin smashing subatomic particles together so that scientists can search through the wreckage for clues about the early universe. 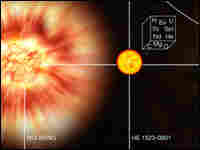 An artist's conception of the big bang. Physicists say the big bang is an explosion that occurred more than 13 billion years ago, creating the universe and the star HE 1523. The Large Hadron Collider may help physicists understand more about what conditions were like in the early universe. ESO hide caption 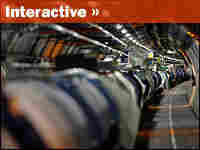 Physicists are throwing the switch on what is arguably the most powerful and most complex science experiment ever conducted.

Find out what exactly they're looking for. 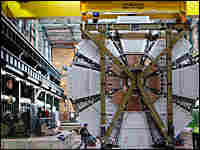 One of the barrel-shaped detectors that will search for elusive subatomic particles. AP/Keystone, Martial Trezzini hide caption 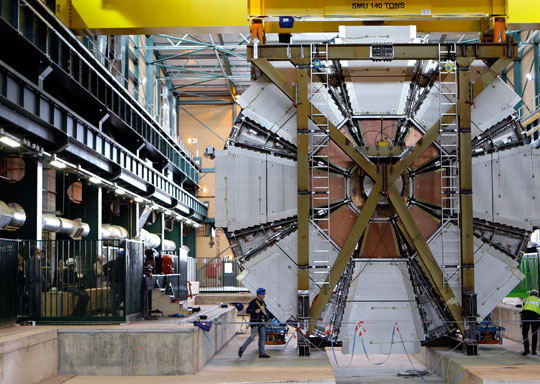 One of the barrel-shaped detectors that will search for elusive subatomic particles.

Physicists from around the world watched as the world's most powerful particle accelerator, the Large Hadron Collider near Geneva, was tested early Wednesday. One physics lab even hosted a "pajama party."

The $8 billion project is designed to smash subatomic particles together so that scientists can search through the wreckage for clues about the fundamental building blocks of matter that make up the universe.

Early Wednesday morning, scientists in Europe sent the first beam of protons zipping all the way around the collider's 17-mile loop of tunnel, buried about 300 feet underground. The final countdown was announced in French, and then, almost immediately, there was applause. The protons move at close to the speed of light and took only a fraction of a second to go around.

At Fermilab, a particle physics laboratory outside Chicago that is contributing to the project, physicists went to work in the wee hours to watch the historic event remotely. Peter Oddone, the lab's director wore pajamas with slipper feet. "I haven't had a pajama party since I was a little kid, but this was such a great event. It was fun to do it," he said.

It will be weeks before circulating beams are made to collide with each other. But Oddone said sending the first beam around is an important step toward full operation of this giant, complex machine. Then, he said, "we can create particles that haven't been seen since a trillionth of a second after the big bang."

Physicists hope a particle they call the Higgs (once referred to as the "God Particle") will emerge. It would help explain why things in the universe have mass. They also hope to manufacture particles of "dark matter" — that mysterious invisible stuff that astronomers believe makes up a quarter of the mass of the universe.

Some models predict that the collider could even create miniature black holes. Physicists say that is a long shot, and certainly nothing to worry about. The black holes, they say, would evaporate — not devour the planet.

"The universe is full of high-energy particles that are much higher in energy than anything we could conceivably make with our puny little accelerators," said John Cramer, a physicist at the University of Washington in Seattle. Very high-energy cosmic rays are slamming into the moon all the time, he said. If this were a problem, "the moon probably wouldn't be there. The fact that it is, probably means that we are safe."