Accessibility links
Broadway Ready For Its Bow — But Are Audiences? The new theater season is at hand — and with high fuel prices and a general economic downturn, you might expect showbiz types to be anxious about audiences. Reporter Jeff Lunden says you might be wrong.

Listen
Broadway Ready For Its Bow — But Are Audiences? 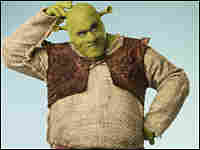 If I sing it, will they come? Shrek (Brian d'Arcy James) headlines his own Broadway musical — with music by Jeanine Tesori and a book and lyrics by Pulitzer Prize winner David Lindsay-Abaire — this December. Andrew Eccles hide caption 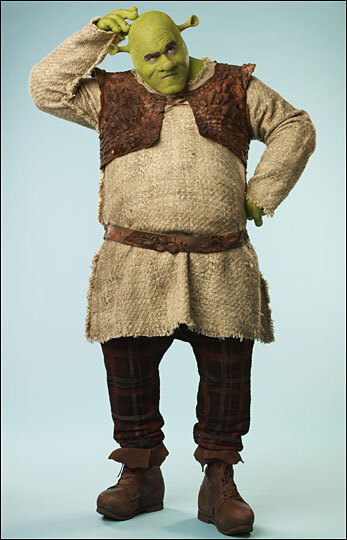 If I sing it, will they come? Shrek (Brian d'Arcy James) headlines his own Broadway musical — with music by Jeanine Tesori and a book and lyrics by Pulitzer Prize winner David Lindsay-Abaire — this December. 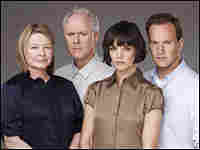 Dianne Wiest (from left), John Lithgow, Katie Holmes and Patrick Wilson are slated to star in a new staging of All My Sons. Andrew Eccles hide caption 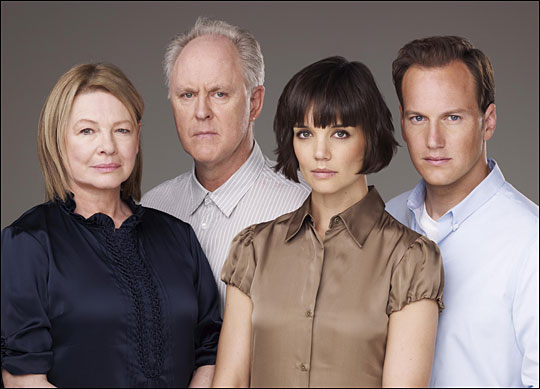 Dianne Wiest (from left), John Lithgow, Katie Holmes and Patrick Wilson are slated to star in a new staging of All My Sons. 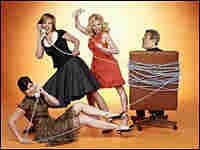 Stephanie J. Block (from left), Allison Janney, Megan Hilty and Marc Kudisch will get all tied up (literally and figuratively) in the upcoming production of 9 to 5. Justin Stephens hide caption 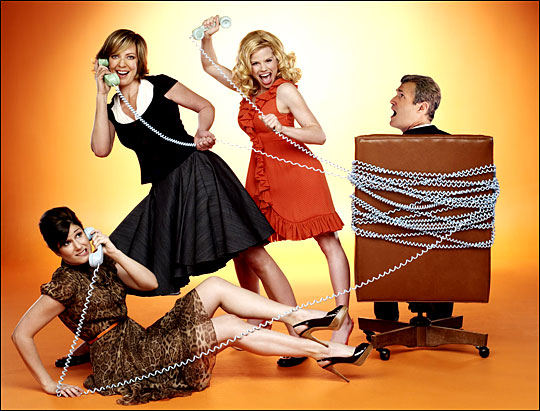 Stephanie J. Block (from left), Allison Janney, Megan Hilty and Marc Kudisch will get all tied up (literally and figuratively) in the upcoming production of 9 to 5.

September is the traditional start of the new Broadway season, and with high fuel prices, a weakish dollar and a general economic downturn, you might expect people in the industry to be skittish about future prospects.

There is some bad news: A revival of Godspell, starring American Idol finalist Diana DiGarmo, was supposed to begin performances this month, but a major investor withdrew financing, and the production has been postponed indefinitely.

The producer blamed the slowing economy — but within a day of the cancellation, the theater had another booking: a revival of David Mamet's Speed- the-Plow.

Variety reporter Gordon Cox says the economy may be weak, but there's no shortage of shows hoping to make it big on Broadway this season.

"There's still a real-estate crunch," he says. "People want to put on shows. The fact that there were other shows to fill in the void left by Godspell — or any of these shows that may not make it in this season — does indicate that investors and producers are still gung-ho about bringing product to Broadway."

Broadway is a notoriously risky business: Four out of five shows fail to earn back their investments. But Charlotte St. Martin, president of The Broadway League, a trade organization of producers, is bullish about the season.

"It certainly doesn't seem like, in the actual purchase of tickets, that there's been any economic downturn," she says. "I think it's a natural tendency for people to read the newspaper and say, 'Oh well, if that show didn't work out, it's the economy.' But so far we don't see [that]."

But, St. Martin says, 22 new shows have announced plans to open on Broadway this season.

And groups — whether they're gaggles of out-of-town tourists or organized theater parties from New York and its environs — are an important component of the Broadway audience. Their advance-sales dollars help fill new shows' coffers.

"Most of them book six to eight months in advance, [and] while people haven't really felt that economy problem five months ago, they may be feeling it now," Mallalieu says. "But they've already purchased their theater tickets, and their plane and their bus tickets, and they're ready to go and actually looking forward to it, because it keeps their mind off their other problems."

In fact, the Broadway League's St. Martin thinks that to a certain degree, Broadway is inoculated against the effects of a sluggish economy. It draws much of its audience from among foreign tourists. And it's located in the center of America's largest metropolitan area.

"We're fortunate in New York, with the weak dollar and with the amount of international tourism that we have, that ticket sales are constantly boosted [by] our out-of-town visitors," Martin says. "And then, as a former tourism executive, I know that when people cut back on their budgets a bit, they tend to go regional. So I suspect we're also benefiting from people who are going to New York instead of Rome."

So while you won't hear the strains of Godspell's "Day by Day" on Broadway any day soon, one song you will be hearing later this season is "America," from the upcoming revival of West Side Story. It doesn't open until March of 2009, but it's already doing a brisk ticket business.

"Even though they don't have a theater yet — again, this is the way the business runs," explains Mallalieu. "You know, West Side Story announces [its opening date, and] all of a sudden we have all these orders pending!"

Of course, West Side Story is a known quantity, even if it hasn't been seen on Broadway for almost 30 years.

Another way theater producers are hedging their bets is by creating new musicals based on popular films. Big-budget productions of Billy Elliot, Shrek and 9 to 5 are all set to open this season.

Yet another tried-and-true gambit: signing up big film stars to perform in revivals of well-known plays. Making their Broadway debuts in the next few months are Harry Potter's Daniel Radcliffe (in Peter Shaffer's Equus), The English Patient's Kristin Scott Thomas in Chekhov's The Seagull and Katie Holmes — that would be Mrs. Tom Cruise, to some — in Arthur Miller's All My Sons.