Accessibility links
From Water To Pillows, Airlines Pile On Fees Airlines are adding a range of new fees for beverages and pillows and blankets to earn more revenue. They're deploying in-flight credit and debit card devices to bolster such transactions. And some carriers are scrapping their music and entertainment systems to save money.

From Water To Pillows, Airlines Pile On Fees

From Water To Pillows, Airlines Pile On Fees 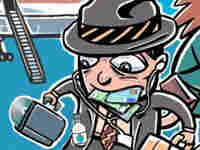 Some airlines are starting to charge fees for everything from food and water to pillows, blankets and entertainment. That means that some travelers will have their hands — and carry-on bags — full to avoid paying for these products and services. Getty Images hide caption 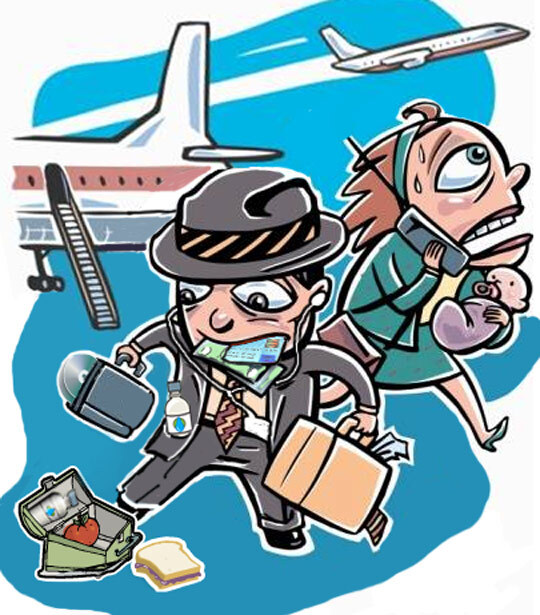 Some airlines are starting to charge fees for everything from food and water to pillows, blankets and entertainment. That means that some travelers will have their hands — and carry-on bags — full to avoid paying for these products and services.

The airplane aisle seat has long been prized as the lone place where a passenger need not feel like a sardine. But that may soon change, as airlines unveil plans that could turn the treasured seating spot into a busy lane for retail sales.

A handful of carriers are arming flight attendants with hand-held devices with which they'll roam the aisles to facilitate debit and credit card payments. This comes at a time when airlines are unveiling new fees for a range of in-flight amenities that passengers used to take for granted — from drinking water to preferred seating to pillows and blankets — while removing other perks altogether (like movies and other entertainment).

High fuel prices are causing many airlines to review each and every service they've offered to passengers free of charge in the past. In a first move for one of the major domestic carriers, US Airways in August decided to begin charging $2 for water and other beverages, including sodas and juices, on domestic coach flights.

This summer, JetBlue announced that it would charge $7 for a pillow-and-blanket kit that passengers can take with them for their next flight. In the spring it also announced a charge for customers interested in purchasing seats with extra legroom — something United has already implemented.

Northwest goes one step further: Two years ago, it started charging for aisle, exit and window seats on domestic flights; this spring, it expanded the program to cover international trips. US Airways followed suit in May.

JetBlue's new fees indicate that "it's not just the legacy carriers that are desperate to increase revenues at this point," says Peter Belobaba, principal research scientist for MIT's International Center for Air Transportation and the program manager for its Global Airline Industry Program. A spokesman for JetBlue says its pillow-and-blanket program is not designed as a revenue generator but as a service for customers.

Belobaba says one of the reasons airlines have turned to charging more kinds of fees is that "people are so focused on getting the lowest possible fares."

A spokeswoman for US Airways says its beverage fee is an extension of an "a la carte" system where customers pay for in-flight meals and other items. The airline expects these charges to bring in additional revenue of up to $500 million a year. This summer, American, United and US Airways also started charging $15 for a first checked bag.

Adding Up The Fees

Carl Schwartz, the chief travel officer for CheapFlights.com, a travel search engine, says he suggests passengers take all of the additional fees into account, especially ones for checked baggage. Other fees — such as those for food or legroom — are optional, he says: "At the end of the day, what they're trying to do is avoid raising the ticket prices."

Although there are exceptions to US Airways' water fees — for someone who doesn't feel well, for kids up to 14 years old and for passengers on shuttle flights — the move underscores a new paradigm for air travel: Board with supplies or be prepared to pay.

The proliferation of fees will add yet another item to some travelers' pre-flight to-do lists if they want to eat or drink. It's permissible to bring food through airport security, but beverages are prohibited. That means passengers who don't want to pay onboard have to fill up an empty bottle at a water fountain or purchase beverages once they've cleared security.

The do-it-yourself preparations that this foreshadows also extend to movies and music. US Airways says it will dismantle all of its entertainment systems starting in November on nearly 200 planes reserved for domestic travel, in a move to reduce weight. (A spokeswoman says each system weighs 500 pounds and the removal of the systems will translate into savings of about $10 million a year.)

U.S. carriers are also exploring ways to become airborne retailers for everything from ground transportation and catalog sales to Broadway tickets and tourist jaunts. American, Delta, Southwest and US Airways have already begun or are in the process of implementing hand-held devices that process credit and debit card sales. The hand-held devices are manufactured by Toronto-based GuestLogix Inc.

A spokesman for GuestLogix said the company is "taking advantage of the impulse-buy opportunity" but that no physical inventory of products will be onboard airplanes.

On Tuesday, Southwest said it will no longer accept cash from passengers to pay for alcoholic and energy drinks. A spokesman said Southwest has no plans to use the hand-held devices for anything other than beverage purposes. The hand-helds are a "more efficient" system for flight attendants and are being implemented partly in response to customers' carrying less cash on their travels, he says. Customers still have the option of paying cash for drink coupon books that can be purchased at airport ticket counters.

Starting in October, US Airways will begin using the hand-held credit and debit card readers on a trial basis for its flights as a way of moving away from cash transactions. The company says it expects to integrate these on all domestic flights by March 2009.

Robert Mann Jr., president of R.W. Mann & Co., an airline industry consulting firm, says he expects passengers will see "a continuation of the unbundling and repackaging" of fees. He's a fan of Air Canada's policy of engaging in a "horse trade" with passengers — offering them a discount if they don't use one of the services, such as checking a first bag. Customers are charged only if they check a second bag.

He sees two possible scenarios for how the industry might structure airfares and fees. In the first, passengers would "pay by the pound for you and your baggage," akin to the way freight airlines or the U.S. Postal Service charges for its services.

The second choice would be to assess the final airfare on the day and time of departure. This would effectively "unbundle the risk" associated with volatile fuel prices, he says. This solution might spawn the birth of a third-party industry that could let customers lock in airfare at the time of purchase by also buying fuel-hedging insurance, akin to travel insurance.