Accessibility links
Pigs Out, But Artist Sells Tattoo Off Man's Back Eight tattooed pigs were supposed to be part of Wim Delvoye's exhibit at a Chinese art show. But authorities didn't consider them art, so Delvoye tattooed an elaborate scene on a man's back and displayed him instead. A collector has purchased the tattoo — with the right to remove it after the man dies.

Listen
Pigs Out, But Artist Sells Tattoo Off Man's Back 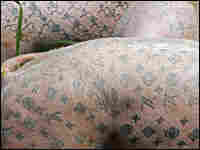 Pigs tattooed with Louis Vuitton logos and Disney characters were not allowed at the ShContemporary art show in Shanghai. Wim Delvoye hide caption 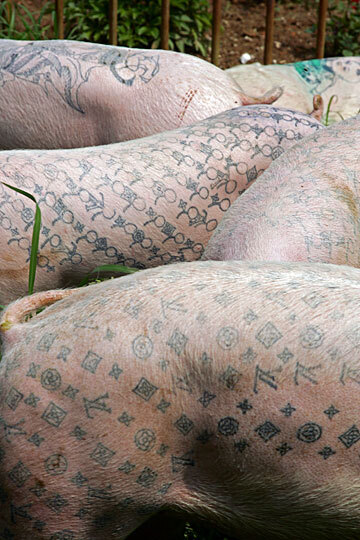 Pigs tattooed with Louis Vuitton logos and Disney characters were not allowed at the ShContemporary art show in Shanghai. 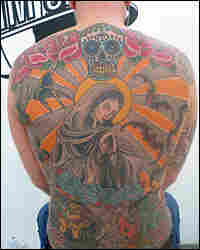 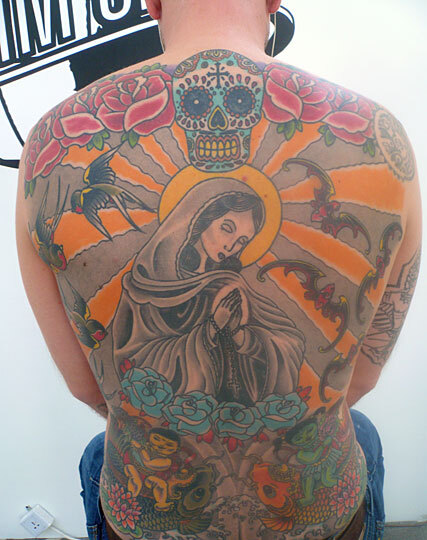 Belgian artist Wim Delvoye tattooed Tim Steiner's back with what Delvoye calls an atlas of what "tattoo" represents.

At ShContemporary, Shanghai's largest art fair, everyone is talking about something that didn't actually happen. Eight pigs, tattooed with Louis Vuitton logos and Walt Disney characters, were supposed to be exhibited as part of an artwork by Belgian artist Wim Delvoye.

Instead, Delvoye is putting on display a Swiss man named Tim Steiner, whose back Delvoye has tattooed with a scene featuring the Virgin Mary.

Delvoye says the scene is an atlas of what "tattoo" represents. "They are the favorites of the tattoo world," Delvoye says. "There is the praying Virgin, there is the skull, roses. We have bats, we have birds, and two Chinese children riding koi carps."

Steiner spent 35 hours being tattooed and had no choice in the scenes inked onto his body.

"I'm not a religious person," he says. "If I'd done my back myself, I would have taken another design." But he says he's extremely happy with the results.

The tattoo on Steiner's back has been sold for almost $215,000 to a collector who has the right to remove it after he dies. Delvoye says bluntly that this is one yardstick that makes the tattoo an artwork, rather than just another tattoo.

"It's art because it got sold," Delvoye says.

Steiner is contractually bound to display his tattooed back at various events and functions, including ShContemporary, where he sits on a stool facing a wall so people can marvel at his back. He is a living canvas whose back will live on as artwork after his death, yet he denies that the concept is macabre.

"If the project finishes the way it should, and the skin will be removed and properly framed, then I will exist forever, at least a part of me will, and I find that concept more exciting than morbid," Steiner says.