Accessibility links
'The Blob' Marks 50th Anniversary It's the 50th Anniversary of The Blob, one of a series of low-budget horror/sci-fi films that proliferated in the wake of the Cold War. The themes that made The Blob a hit in 1958 are still the ones that keep it in our consciousness today.

It's the 50th Anniversary of The Blob, one of a series of low-budget horror/sci-fi films that proliferated in the wake of the Cold War. The themes that made The Blob a hit in 1958 are still the ones that keep it in our consciousness today.

Fifty years ago, "The Blob" oozed its way into movie theatres. It was one of many science fiction films that exploited the public's fascination with aliens.

And now, reporter Keith Brand looks back and finds that 50 years later, "The Blob" offers a unique view of the psychology of 1950s America.

KEITH BRAND: If you were afraid of the red menace in the late 1950s, communism might not have been the only thing on your mind.

Mr. ALDEN STEPHEN CHASE (As Dr. T. Hallen): There's a man here with some sort of a parasite on his arm that is assimilating his flesh at a frightening speed. I may have to get ahead of it and amputate. No, I don't know what it is or where it came from.

BRAND: In "The Blob," the alien lands near a small town and starts dissolving the inhabitants. Films like the "The Blob," "The Day the Earth Stood Still" and "It Came from Outer Space" made the most of our fears about an increasingly polarized political world where nuclear technology was out of control.

Professor CHRISTOPHER SHARRETT (Film and Communication, Seton Hall University): I think this is characteristic of the period itself, which after all, was the time of McCarthyism and HUAC.

BRAND: Christopher Sharrett is a professor of film and communication at Seton Hall University.

Prof. SHARRETT: "The Blob" fits into this notion that science doesn't have all the answers because after all, in "The Blob," we don't really know what it is or where it comes from or what its ambition is. All it does is suck things up.

BRAND: "The Blob" wasn't just a science fiction film, it was also a teen pick. In many of these 1950s films, the teenagers were out of control.

Mr. STEVE McQUEEN (Actor): (As Steve Andrews) The least I could have done is thank you for coming out tonight.

Mr. McQUEEN: (As Steve Andrews) I knew I needed to talk to him before as much as I do now.

BRAND: The producer of "The Blob" was Jack Harris. He saw the young Steve McQueen the beginnings of a remarkable screen talent.

Mr. JACK HARRIS (Producer, "The Blob"): We had a guy that was about to become one of the biggest stars right ahead the movie business, Steve McQueen.

BRAND: In "The Blob," he's the first one to encounter the alien and tries to warn the unsuspecting town.

Mr. McQUEEN: (As Steve Andrews) This town is in danger. Now, several people have been killed already. Now, we had to make this noise, we had to make it so you'd listen to us, so we could warn you.

BRAND: At first, nobody except the teenagers believes McQueen. But by absorbing the bodies of its victims, the creature grows enormous. Finally, it's Steve McQueen who discovers its weakness and is able to stop it cold.

Mr. McQUEEN: (As Steve Andrews) What are you going to do with that thing, Dave?

Mr. EARL ROWE (Actor): (As Lieutenant Dave) Oh, the Air Force is sending a globe master in. They're flying it to the arctic.

BRAND: At the close of the film, we're led to believe that the blob's reign of terror might not have come to a permanent end. Mary Foote is the director of BlobFest, a yearly celebration of "The Blob."

Ms. MARY FOOTE (Director, BlobFest): He ends up being shipped out to the arctic and the movie director put a big question mark at the end.

BRAND: Why do you think it's a he?

BRAND: It's that troublesome disposition that leads the audience with a clear moral choice in these films. It's a them or us. Just as the politicians of today took advantage of our fear of evil empires, so did the movies. But the science fiction films of the 1950s both exploited and allayed those fears. In "The Blob," the alien is defeated, a small suburban town triumphs over adversity, teenagers are redeemed, and our way of life is preserved, at least until the 1960s.

SIEGEL: Keith Brand, by the way, grew up in the town where "The Blob" was filmed. You can read his essay about "The Blob" and Phoenixville, Pennsylvania, on our Web site, npr.org.

(Soundbite of song, "Beware of the Blob")

THE FIVE BLOBS (Band): (Singing) Beware of the Blob. It creeps and leaps and glides and slides across the floor right through the door and all around the wall. A splotch, a blotch. Be careful of the Blob.

SIEGEL: One last note about "The Blob," this theme song, a young unknown songwriter was commissioned to write "Beware of the Blob" and it went to number 33 on the Billboard Pop Chart. The songwriter was Burt Bacharach.

When Hometown Was Home To 'The Blob'

"Healthfully Air Conditioned": It's not the climate control the Colonial Theatre crowd is fleeing in The Blob's most iconic scene. Tonlyn Productions/The Criterion Collection hide caption 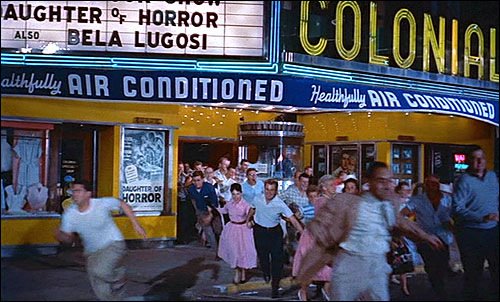 "Healthfully Air Conditioned": It's not the climate control the Colonial Theatre crowd is fleeing in The Blob's most iconic scene.

Watch: 'Panic At the Midnight Movie'

Phoenixville's Colonial Theatre, where that midnight-movie panic scene was filmed, saw hard times in the '70s and '80s. Today, it's in the process of restoration. Association for the Colonial Theatre hide caption 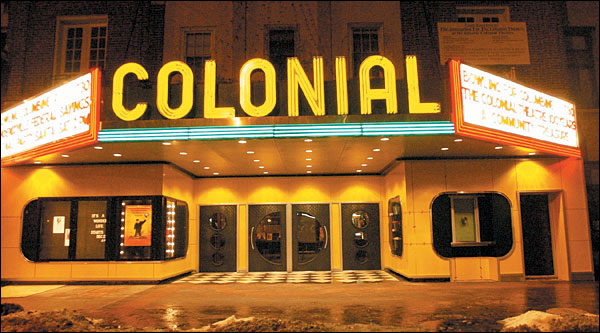 Phoenixville's Colonial Theatre, where that midnight-movie panic scene was filmed, saw hard times in the '70s and '80s. Today, it's in the process of restoration.

Association for the Colonial Theatre 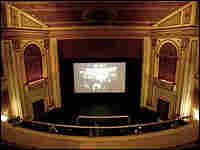 Grande dame: The auditorium at the Colonial; the seating has been overhauled, but a full interior restoration is still in the planning stages. hide caption 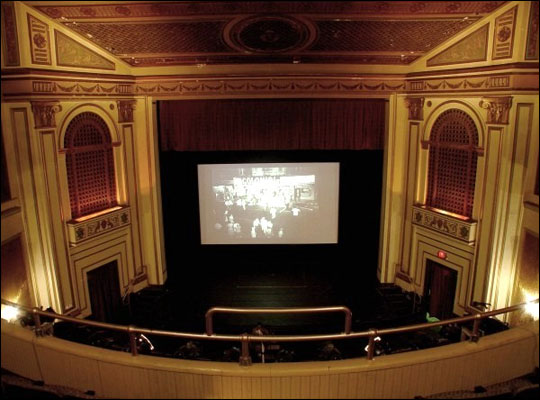 Grande dame: The auditorium at the Colonial; the seating has been overhauled, but a full interior restoration is still in the planning stages.

My parents moved my brother and me to Phoenixville, Pa., in 1963. We left the comfort of our extended family in Philadelphia and settled into the relative isolation of a brand-new subdivision 40 miles away.

Perched on the banks of the Schuylkill River, the Phoenixville of my youth saw its fortunes ebb and surge, inextricably tied to the economy that fed Phoenix Steel; it was a blue-collar industrial town, its downtown offering few of the choices the new malls nearby could.

But my new hometown had something nobody else's did. In 1957, a small crew of filmmakers had made what would become an enduring science fiction classic: The Blob. Scouting nearby locations, director Irvin S. Yeaworth Jr. decided to shoot a crucial scene in Phoenixville.

You know the one: In the film, the title creature — a gooey alien that's emerged from a meteorite — grows to enormous proportions feasting on the bodies of unsuspecting Pennsylvanians. Looking for a quick snack, it finds the local theater filled with late-night moviegoers — watching a midnight double feature of monster movies, ironically enough. The panic that ensues is one of the film's iconic moments.

And the icon at the heart of it was the Colonial Theatre, which sat majestically in the center of the main business district of Phoenixville. Built in 1903 as an opera house, it was home to many traveling theatrical shows in the early years of the 20th century. It was grand and opulent, with 600 seats, an expansive stage, ornate plaster detailing, and a neon marquee announcing that it was "healthfully air conditioned."

By the time I was regularly going to movies, the Colonial Theatre was an anachronism. Multiplexes had begun their spread across the country, and the old movie houses had begun to disappear. But despite the broken seats, sticky floor and peeling paint, there was something memorable about seeing movies at the Colonial. I vividly remember seeing The Godfather there with my brother, in 1972. Although I was unable to articulate it then, this was a cinematic experience that was passing into oblivion.

When I left my hometown for college in the mid-1970s, it was with the intention of never returning. I received sporadic news of Phoenixville's decline from my parents; when the steel mill finally closed in the 1980s, many thought it would be the final blow to a small town that had barely weathered the economic recessions of the 1970s. Nearby malls, like the one in King of Prussia, had lured customers away from the locally owned shoe stores, restaurants and five-and-dimes. Phoenixville's only department store, W.T. Grant, closed in 1976.

As Phoenixville's fortunes sank, the Colonial Theatre became even more valued as an institution vital to the city's survival. While many of the old-style theaters were "twinned," or repurposed as drug stores, attempts to alter the Colonial were never realized. Finally, in the 1990s, a nonprofit corporation purchased the theater, and has since been working to restore it to its original grandeur.

In the past decade, Phoenixville has experienced a remarkable transformation. Spurred by nearby corporate development, its downtown now boasts new bistros, antique stores and upscale housing.

And every year, in early July, people from around the country come to BlobFest, a weekend celebration of the film that gave my Pennsylvania hometown its claim to fame. Among the rituals: a short-film competition, a scream contest, a fire extinguisher parade — and an annual re-creation of that fleeing-the-theater scene.