Accessibility links
Lipstick Lines: Like Pouring Fuel On A Fire? Careful with the jokes, male politicians. If you're running against a female candidate, avoid witticisms that mention lipstick. Or references to feminine grooming products or hairstyles or gender-specific clothing. 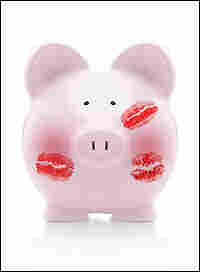 Bank on this: Putting lipstick on a pig can yield unpredictable results. iStockPhoto.com hide caption

Various versions of the old trope "You can put lipstick on a pig, but it's still a pig," have been around for decades.

The key word here is lipstick. It echoed Palin's joke from her acceptance speech at the Republican National Convention that the only difference between a hockey mom and a pit bull is lipstick. It was the best-remembered line in a speech that was full of memorable lines. (Though not much has been made, so far, about Palin comparing herself to a pit bull.)

Had Obama said earrings on a cat or antlers on a Volkswagen, it might not have generated the same controversy. But the lipstick connection gave the McCain campaign an attacking opportunity.

Still, "lipstick on a pig" is a saying as old as the hills.

John McCain used the expression himself when talking about Hillary Clinton's health care initiatives. Vice President Dick Cheney trotted it out in reference to John Kerry's foreign policy. Former Rep. Patricia Schroeder (D-CO) once used it to talk about "cosmetic amendments" on bills. Former Pentagon communications chief Torie Clarke even wrote a book about political spin called Lipstick on a Pig: Winning in the No-Spin Era by Someone Who Knows the Game.

And so "lipstick on a pig" enters the Political Cliche Hall of Fame. Along with other bons mots such as "all hat and no cattle," "all sizzle and no steak" and "like nailing jello to the wall." Colorful political sayings all, but as old as Methuselah.

Desiring change, here's a new list of witticisms that can be substituted for "lipstick on a pig."

1. Mascara on a moose

2. Earrings on a cat

3. Cologne on a skunk

4. Toupee on a bald eagle

5. Lipstick on a politician

None of them is quite as descriptive as the glossed-hog phrase. But it may be that in the 21st century, any male candidate running against any female candidate should avoid at all costs any mention of the word lipstick. Or any other word connoting a feminine grooming product or device. Or a hairstyle or item of gender-specific clothing.

To do otherwise is to risk accusations of sexism. And days of debate that distract voters from substantive issues.