Accessibility links
Seven Years After Attacks, No Memorial In NYC For all the scenes of cranes at work at ground zero in New York City, the site is still a giant, lifeless crater seven years after two hijacked airplanes destroyed the twin towers. Paul Goldberger, architecture critic for The New Yorker, offers his insight.

Listen
Seven Years After Attacks, No Memorial In NYC 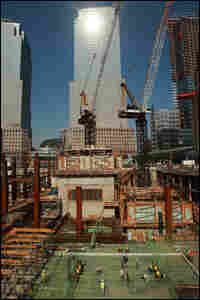 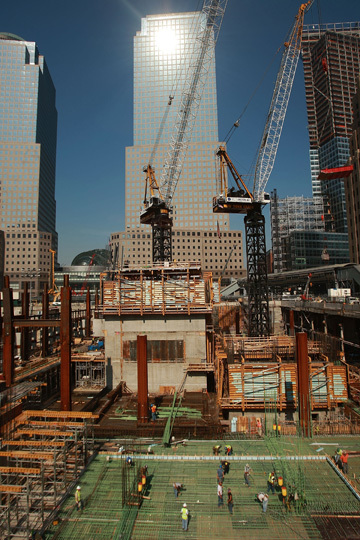 Construction workers build the foundation of the Freedom Tower at the former World Trade Center site in New York City.

For all the scenes of cranes at work at ground zero in New York City, the site is still a giant, lifeless crater seven years after two hijacked airplanes destroyed the twin towers.

Why is there nothing finished at this point?

Paul Goldberger, architecture critic for The New Yorker magazine, blames the number of stakeholders involved in the project.

"There were simply too many people with too many different interests. And nobody could really run the show. There was no real vision or leadership there," Goldberger says.

Among those at the planning table are the Port Authority of New York and New Jersey, which built the World Trade Center, as well as Larry Silverstein, the private developer who leased the twin towers.

New York then-Gov. George Pataki, who was in charge on Sept. 11, 2001, also gave the Lower Manhattan Development Corp. a seat.

The new Freedom Tower project is a commercial effort that includes a memorial and some cultural facilities.

Except on paper, the project has not visibly taken shape.

"To be fair, they have begun to configure the lower levels with all the subterranean stuff that you're going to need," Goldberger says. "So they are doing something. It just hasn't come aboveground." He notes that there will be an elaborate underground security system for trucks making deliveries to the complex.

While the goal has always been to restore the site to its original commercial function with an added memorial, there has been conflict over, among other things, what should be more prominent.

Goldberger says that there may be a lesson in building in Beijing, site of the 2008 Olympic Games, where many structures went up well after Sept. 11, 2001.

"Democracy isn't always such a good thing for architecture," he says. "It's a good thing in general, and of course, we don't want to lose it or trade it. But in fact, one of the prices we pay is that big projects take a long time, [and] they create a huge amount of dissent in terms of discussion. In China, there was no discussion. It was simply ordained."