Accessibility links
A Small-Town Mayor Vs. A Community Organizer Sarah Palin threw down the gauntlet when she said, "I guess a small-town mayor is sort of like a community organizer, except that you have actual responsibilities." What does it take to be mayor of Wasilla, Alaska? How about a community organizer in Chicago?

A Small-Town Mayor Vs. A Community Organizer

A Small-Town Mayor Vs. A Community Organizer 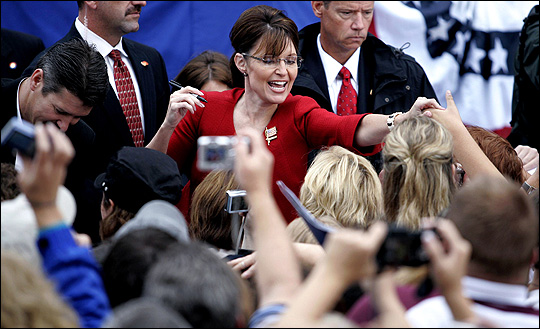 Some of the crowds Sarah Palin sees these days contain more people than Wasilla, Alaska. Here she campaigns in Lebanon, Ohio.

Barack Obama sees huge crowds, too, but here he's working the kind of smaller room (a classroom in Norfolk, Va.) in which he began his career as a political organizer. Saul Loeb/AFP/Getty Images hide caption 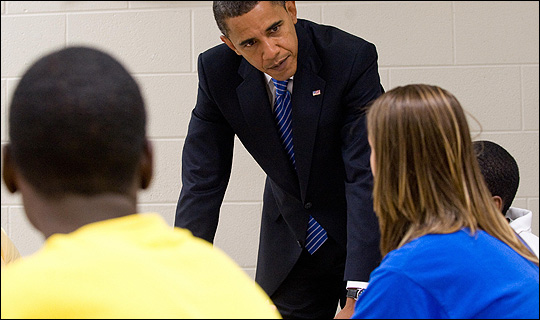 Barack Obama sees huge crowds, too, but here he's working the kind of smaller room (a classroom in Norfolk, Va.) in which he began his career as a political organizer.

Sarah Palin threw down the gauntlet at the Republican National Convention when she said, "I guess a small-town mayor is sort of like a community organizer, except that you have actual responsibilities."

For answers, we consulted several sources, including Madeline Talbott of Action Now, who has spent more than 30 years as a community organizer in Chicago, and Myrl Thompson, a former journalist who was elected to the school board in Wasilla's borough.

Here is the tale of the tape:

Palin: She was mayor of Wasilla from 1996 to 2002. The population was about 6,300 when she left office. (She ran unsuccessfully for lieutenant governor in 2002, then chaired the Alaska Oil and Gas Commission for a couple of years. She was elected governor in 2006.)

Obama: As director of the Developing Communities Project from 1985 to 1988, Obama was a community organizer on Chicago's South Side. (He left in 1988 to enter Harvard Law School. He practiced law, then served in the Illinois Senate from 1996 until 2004. He ran unsuccessfully for the U.S. House in 2000 but was elected to the U.S. Senate in 2004.)

Palin: "It was close to a 9-5 type job," Thompson says of Palin's typical day as mayor. "She is a hard worker and made herself fairly available. Many people were impressed by her work ethic, and I'm sure others had different opinions."

Obama: An ordinary day for a community organizer in Chicago is 12 hours or so, says one Action Now worker.

Palin: When Palin ended her second term as mayor, Thompson says, the city had more than 60 employees and revenues of $8.7 million.

Most of the improvements during the Palin era were to city streets, parks and recreation, and water and sewer projects, Thompson says. When Palin was elected, the city was free of long-term debt, Thompson says, but when she left office, the city owed more than $20 million in bonds: roughly $15 million for a sports complex, $5 million for paving, $3 million for water utility, and a few smaller ones.

All in all, Palin "made Wasilla a better place," Thompson says. "She did expand government, but in fairness the population did grow a bit. ... She did leave the city with a fairly substantial long-term debt. The upside is the quality-of-life positives like parks and the sports complex and some infrastructure enhancements. City property taxes came down and were later eliminated, but that was due to higher revenue from sales taxes."

Obama: By the time Obama left the Developing Communities Project, he was in charge of a 13-person staff and his group had an annual budget of $400,000, The Times of Trenton reports.

In Hopes and Dreams: The Story of Barack Obama, biographer Steve Dougherty writes that as a community organizer Obama helped establish a counseling and mentoring program for at-risk young people. He worked with South Side residents to force the city to remove asbestos from housing projects. "Small neighborhood groups organized by Obama and his colleagues operated street cleanup campaigns and Crime Watch programs, successfully sought improved sanitation service from the city, and got the parks department to clean up and improve South Side green spaces and playgrounds," Dougherty writes.

"His job was to bring poor people together to wield as much power as people with money," says Madeline Talbott. "He had an ability to build relationships and keep his sense of humor."