The key events in Eugene Onegin all stem from one scene, when Tatyana writes her fateful letter. In the final passage of that letter, she asks, "Kto ti? Who are you? My guardian angel or a clever tempter?" 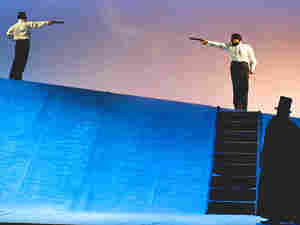 Falling in love may be one of life's most delicious moments, but it almost always involves going out on a precarious emotional limb.

For example, chances are that at some point in your life, a sudden romantic impulse led you to reveal your love to someone who may or may not have returned those feelings — throwing caution to the wind, in hope of a joyful result. Today, that revelation might be delivered in a phone call, an e-mail or even a text message. In

Peter Ilyich Tchaikovsky's day, that sort of confession was more likely to arrive in a letter.

When Tchaikovsky sat down to write Eugene Onegin in the spring of 1877, it was a case of life imitating art. The thing that attracted Tchaikovsky to the original story, by Alexander Pushkin, was a powerful scene in which the heroine, Tatyana, decides to profess her love in a letter to a man she has met only once.

Just weeks before, Tchaikovsky had retrieved his own mail to find a fervent love letter from a former student he had met at the Moscow Conservatory. At first, Tchaikovsky refused her. But her letters kept coming, and became more and more passionate. It's been said that Tchaikovsky identified so strongly with Pushkin's Tatyana, and was so angered at the callous character Onegin, that the composer gave in to his own admirer.

In the space of a few months, the composer found himself married — and with an opera already two-thirds complete. Tchaikovsky's marriage lasted three months. The drama that grew out of it has lasted a bit longer: It's still his most popular opera more than 125 years later.

In this edition of World of Opera, host Lisa Simeone presents Tchaikovsky's Eugene Onegin, a quintessentially Russian drama, in a production from a historic hotbed of Italian opera: the venerable Teatro Carlo Felice, in Genoa.

The Story Of 'Eugene Onegin' 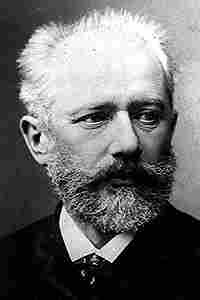 Peter Tchaikovsky wrote Eugene Onegin in the late 1870s, inspired by his own troublesome love life, as well as a passionate story by Pushkin. Getty Images hide caption 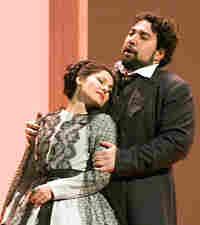 ACT ONE begins at a country home. Tatyana and her sister Olga are singing a duet, while their mother and the maid are reminiscing about courtship and marriage. Farm workers celebrate the harvest with a chorus and a dance, and the neighbor Lensky shows up with a friend named Eugene Onegin. Onegin is immediately struck by Tatyana's great beauty. He doesn't understand why his friend Lensky has fallen for the much less interesting sister, Olga.

Onegin's charm quickly wins Tatyana over, and she thinks her wait for Mr. Right has just ended. The two couples pair off. Lensky sings of his love for Olga, while Onegin quizzes Tatyana about the limitations of her life in the country.

Later that night, Tatyana is in her room with the maid Filipyevna. She admits that she's consumed by her love for Onegin. She asks for pen and paper, and to be alone to compose a letter to Onegin, confessing her love. Her long solo scene is a tour de force for a soprano, with a strong lyric voice and a keen sense of drama.

A few days later, Onegin arrives at the house with his reply. The news is bad. In the garden, he tells Tatyana that he's touched by her love letter, but he can only love her like a brother; he's not cut out for marriage. And besides, she should learn to control her feelings a little better. As it happens, these are some of the very same things Tchaikovsky told a young admirer when she first confessed her love to him. Tatyana is humiliated.

ACT TWO begins in Tatyana's house, where a party is being thrown for her. Onegin and Lensky are both there, along with a few military men and other guests. Onegin is bored. For fun, or maybe just because he's a jerk, he flirts with Tatyana's sister, Olga — Lensky's girlfriend. Triquet, a Frenchman, sings a few verses he's composed in honor of Tatyana, as Onegin continues dancing with Olga.

Not surprisingly, Lensky is unhappy with Onegin's attention to Olga. As he watches the two together, growing more and more jealous by the minute, he suddenly loses it. Lensky goes to Olga and says an ominous goodbye. Then he denounces Onegin and, to everyone's surprise, challenges him to a duel. Onegin agrees. It'll be pistols at dawn, by the river.

The next day, just after sunrise, Lensky is ready — standing in the bitter cold, by the water mill. He's waiting with his assistant Zaretsky for Onegin, who is late. Tchaikovsky writes a gorgeous aria for Lensky here — full of resignation, longing for the good old days and his love for Olga.

Onegin finally shows up, and the paces are marked off. A pistol shot rings out, and Lensky drops dead. Until now, the callous Onegin hasn't been taking things seriously. Now, as he watches Lensky bleed to death in the snow, Onegin can't believe what he has actually done.

ACT FOUR is set in St. Petersburg, five years after the fateful duel. Onegin has been drifting, disillusioned with his life and haunted by Lensky's death. He finds himself at a black-tie gala. When the arrival of a princess is announced, Onegin notices that she looks awfully familiar. It's Tatyana — the country girl he snubbed years ago. She's obviously done well for herself, making her appearance in a fancy gown with a nobleman on her arm.

Her husband, Prince Gremin, introduces his wife to Onegin by singing of his devotion to her. Tatyana and Gremin retire as Onegin realizes that he's now fallen in love with the very woman he once rejected.

The opera ends with a powerful scene between Tatyana and Onegin. He's come to her home. This time, he confesses his love. She says he's only interested in her now because she's wealthy. He denies it. She recounts how they were so close to happiness. Then, finally, she admits she does still love him. They embrace, but she pulls back. Her fate has been decided, she says. She's married now, and Onegin must leave. He begs Tatyana to stay with him, but she calmly walks out of the room, leaving Onegin alone with his misery.