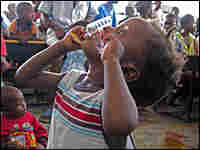 A boy eats crackers at a shelter in Haiti. Jason Beaubien/NPR hide caption 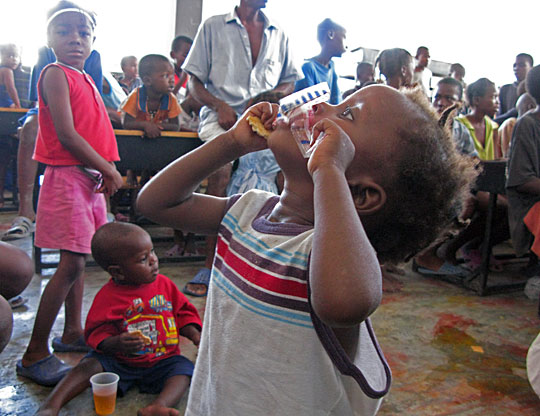 A boy eats crackers at a shelter in Haiti. 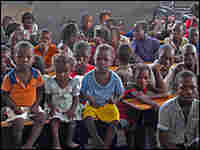 More than 100 children wait for a snack at a school that was turned into a shelter. Jason Beaubien/NPR hide caption 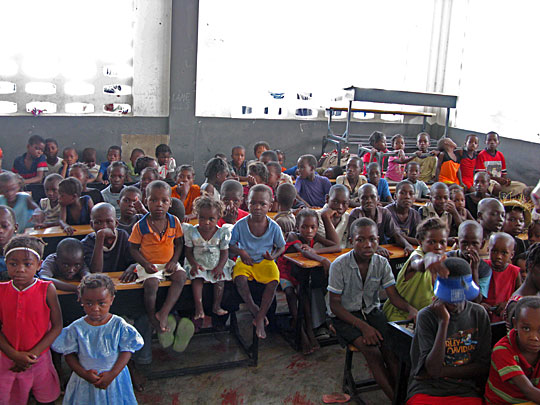 More than 100 children wait for a snack at a school that was turned into a shelter. 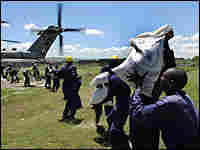 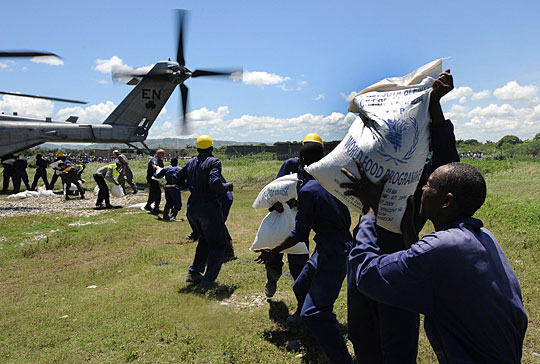 Relief operations continue in Haiti for the hundreds of thousands of people affected by two tropical storms and two hurricanes in the last month. Tens of thousands of homes were destroyed and large parts of Haiti remain cut off from the rest of the country.

The international relief operation is focusing on the northern port city of Gonaives, which flooded twice in one week, but many other parts of Haiti are still reeling from this year's hurricane season.

In the Grand Ravine neighborhood of Port-au-Prince, 700 people are living in a school where there is no running water, no electricity, no beds and often no food. People have been packed in here for weeks.

Luita Armand has been sleeping on the cement floor here since late August.

"The only thing we want is for them to rebuild our house," Armand says. "Here it's a school. We can't stay here for a long time. We have to go home. Before we go home, it's very important that the government help us rebuild our house."

Armand fled to the school with her five children just before Hurricane Gustav made landfall on Aug. 26.

One floor below where she sleeps, 122 children are packed into a single classroom waiting for cookies and juice. Unfortunately the cardboard box that's supposed to have the cookies actually contains bottles of bleach, so the kids get grape soda and Saltines.

Evel Fanfan, with a human rights group in Port-au-Prince, is passing out the meager snacks. He says what he needs now is for the government to establish some order in this chaotic encampment so he can distribute more substantive food.

"Some policemen, some people who can help provide security," Fanfan says. "Right now I'd like to get some rice to the kids. But I can't do that. I'm scared the old people just get it."

It's not just these 700 people in this school or the flooded residents of Gonaives who have been hit hard this hurricane season. All across the country — from Les Cayes in the south to Jacmel in the southeast to Cap-Haitien in the north — there are people who lost everything to the storms.

In the parking lot of the main offices of Catholic Relief Services, several dozen people are packing food into large plastic bags.

"We got rice, bread, peanut butter, beans," says Bill Canny, the country representative for Catholic Relief Services. "So it's a packet to sustain a family of five for 15 days. We have trouble getting these to Gonaives — the roads have been closed. But there are plenty of places affected and we are getting it to other parts of the country that are equally suffering from the effects of the hurricanes."

Catholic Relief Services first came to Haiti in response to Hurricane Hazel in 1954. It has grown into one of the largest aid agencies in the country.

Canny says this storm season has been a huge setback for farmers here.

"When the water drops a bit more, we'll be better able to do an assessment, but you can count on a very significant crop loss this year," he says.

Haiti is already heavily dependent on food imports — more than half of Haiti's food comes from abroad. Rising global food prices earlier this year sparked riots in the country and led to the prime minister's ouster.

With the crop losses from these most recent storms, Haiti will have little choice but to remain heavily dependent on food imports for at least another year.

The storms also have delayed the opening of schools by a month. Roads, bridges and other infrastructure have been wiped out. A newly refurbished hospital in Gonaives that was destroyed in 2004 by Hurricane Jean was demolished again this month by Hanna.

"It's not often that a country can be hit by four tropical storms successively," says Abel Nazier, the deputy coordinator for Recent Disaster Management at the Haitian Interior Ministry.

Many Haitians complain that the government did not do enough to prepare for the storms, did not warn people to evacuate, was not able to rescue people who were trapped and now has no plan to get people back home.

Nazier denies all this. He says the death toll, especially in Gonaives, would have been much higher had the government not issued warnings right before Hanna hit.

"We don't have enough possibility in terms of resources — economical resources," he says. "But we have a good national system for recent disaster management."

Nazier says the government does have a plan for getting people back in to their homes, but he says that part of the response won't begin for another six months. Right now, he says, the government is focused on providing emergency relief such as water and food to the thousands and thousands of Haitians who lost their homes in the storms.