Accessibility links
For Blind Triathlete And Guide, A Win-Win Situation Aaron Scheidies, who is blind, is a top triathlete, finishing 28th in a field of 1,127 in the Los Angeles Triathlon last week. His guide for the race was professional triathlete Matt Lieto, who says he was taken aback by Scheidies' abilities.

Listen
For Blind Triathlete And Guide, A Win-Win Situation 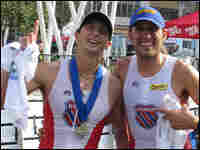 Imagine what it would be like to bike 25 miles, swim one mile and run six miles without your sight to guide you.

Aaron Scheidies is proof that it's possible. The 26-year-old, who is blind, is one of the top triathletes in the world.

Tall and trim, Scheidies joined the crowd of racers at the 2008 Los Angeles Triathlon last week. Because that wasn't enough, he will compete this weekend, too, against hundreds of sighted athletes in the 2008 Nautica Malibu Triathlon.

Scheidies races with a guide to keep him on track. For the Los Angeles race, it was professional triathlete Matt Lieto. The men completed the race side by side. To stay together during the swimming portion, they connected to each other with a six-foot bungee cord. For the biking portion of the race, they used a tandem two-seater with Lieto up front and Scheidies in the rear.

Scheidies insisted he wasn't nervous before the race.

"I'm not the athlete that's all super-serious gung-ho," Scheidies said. "I really am pretty laid back until normally a couple minutes before the start of a race or any competition. And then, it's game time."

Scheides did not grow up wanting to be a triathlete.

"Actually, I never really knew about the sport of triathlon very much at all," he recalled. "I always wanted to be a professional soccer player."

At a young age, Scheidies developed Stargardt's disease, the most common type of inherited juvenile macular degeneration. The disease affects the macula, a yellow oval spot near the center of the retina. The condition affects about one in 10,000 children.

"I lost my vision and went through very hard times trying to compensate by working harder than everyone else," he said.

Shortly after his diagnosis, he was introduced to the C Different Foundation, an organization in Fort Lauderdale, Fla., that tries to inspire blind and visually impaired athletes to compete by helping them find sponsors and setting them up with guides.

When Scheidies' original guide for the Los Angeles race had to cancel, sponsor K-Swiss contacted Lieto, who had never been a guide. He was taken aback by Scheidies' abilities.

"It was eye-opening to see what this guy can do without being able to see," Lieto said after the race.

At the Los Angeles Triathlon, Scheidies came in 28th in a field of 1,127 sighted triathletes — pros, amateurs and beginners. In his elite amateur group of 32, he came in sixth.