Accessibility links
Fledgling Wind Farms Prepped For Hurricane Wind farms are by their nature exposed to the elements, but now several energy companies are building wind towers in the hurricane-riddled Gulf of Mexico. 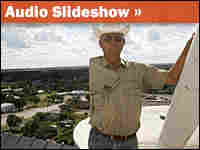 Take a tour of a Roscoe, Texas, wind farm 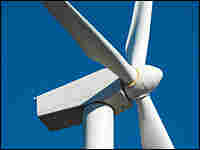 Most wind turbines are designed to automatically shut off when winds reach speeds of around 50 mph. iStockphoto.com hide caption 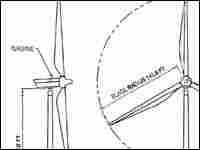 This is part of a diagram of the wind turbines that will be constructed for the Gulf Coast offshore wind farm. Click to see the full diagram. Courtesy WEST hide caption 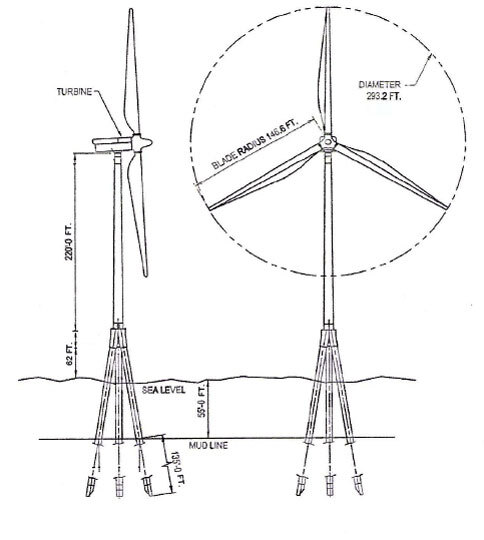 This is part of a diagram of the wind turbines that will be constructed for the Gulf Coast offshore wind farm. Click to see the full diagram. 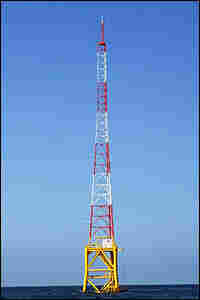 As Gulf Coast oil companies brace for Hurricane Ike, the developers of new wind farm projects are confident their turbines can withstand the elements.

Hurricane Ike might be an early test for a fledgling offshore wind farm project in the Gulf. Wind Energy Systems Technology is moving forward with plans to build a 62-turbine wind farm off the Gulf Coast south of Houston. With one test tower constructed, company President Herman Schellstede says the towers his company designed can withstand winds of up to 150 miles per hour and 200 mph gusts.

"We've been building offshore oil and gas platforms for 42 years, so we are very acquainted with how to build structures out there to endure hurricanes," says Schellstede. "We don't feel uncomfortable saying [the towers] can withstand 150-mile-an-hour winds."

So far, the test tower has withstood 85 mph winds, and it may see winds of more than 100 miles an hour as the storm passes through Galveston on Saturday.

Unlike the single-pole-supported towers used in the majority of the European offshore wind farms, stronger structures are required to support turbines being built off the Gulf Coast. The European model just won't work in the Gulf, Schellstede says, because hurricanes and other cyclonic storms unleash more fierce winds. So, WEST developed a unique tripod designed to support the tower on three legs, which are buried more than 100 feet below the underwater mud line. Similarly, when winds get to around 55 miles per hour, automatic shut-off devices kick in on the turbines.

About 200 miles southeast of Galveston and just nine miles inland, another company is near completion of a 118-tower wind farm, the first-ever wind farm to be built on the Gulf Coast. Project leaders at Babcock & Brown say the project has taken many precautions to protect their wind towers from hurricanes, including using turbines specifically designed for typhoon conditions in Japan.

Offshore wind farms are gaining momentum in the U.S., says Laurie Jodziewicz of the American Wind Energy Association. And, since many in the oil and gas business have specialized in construction in marine environments, Jodziewicz says many see offshore wind farming as a potential area to expand their business.