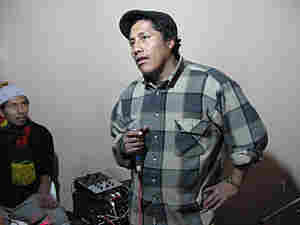 Abraham Bojorquez and his group of rappers rehearse in El Alto, Bolivia, before a recent concert swing through Ecuador. Juan Forero/NPR hide caption

Visitors to the harsh, cold, windswept Andes of South America are familiar with the traditional music there — it's almost all windpipes, with the occasional haunting lyric. It's been that way for centuries in the remote country of Bolivia, but there are many more kinds of music there, from folkloric to protest to even baroque. The latest trend, generated by indigenous youths, is rap, and it's catching on in Latin America's largest indigenous city.

Bolivian music also comes from the far eastern lowlands — guitar-laden cruceno, music made for dancing. In the south, there's Enriqueta Ulloa and her folkloric songs. Now, a new kind of music has spread across the gritty cinderblock city of El Alto, which is 14,000 feet up in the highlands, home to hundreds of thousands of Aymara Indians.

The music is rap, and it's hard and fast, railing against consumerism and money, and promising to "break the chains of oppression" and spark revolution. The music is, in some cases, sung in Aymara, the predominant tongue among highland Indians in this region of Bolivia.

The lyrics stem from Bolivia's tradition of protest music — condemning the Yankees, while celebrating the newfound power and influence that have buoyed indigenous people here ever since Evo Morales, an Aymara Indian, won the presidency in 2005.

One young rapper is Abraham Bojorquez. Bojorquez explains that one of his songs, "We're Going to Rise Up," tells the story of Bolivia's native people — children of the great warrior Tupacatari — and the Aymara's long struggle. He says that his music tries to speak for the people, to denounce injustice and to honor indigenous communities for what he calls "the recuperation of indigenous identity."

'The Abyss Of Racism'

Alvaro Montenegro, who teaches at the National Conservatory of Music, also produces rap music at his home studio. One song he has worked on, "The Abyss of Racism" by Bojorquez, says that racism is here, there and everywhere — when will it stop? Montenegro says it's a theme familiar to many Bolivians, and that it ranks among the hard social themes that spawned and continue to inspire Bolivian rap.

As Bolivia's first indigenous president, Morales has promised to overturn the old social order. That gave rappers even more to sing about. Many of them fine-tune their work in a radio station in El Alto: Wayna Tambo. Under bare light bulbs, squeezed into a small room, Bojorquez and his two fellow musicians practice. The next day, they're off for a concert in Ecuador.

Freddy Limanchi runs the tracks — the heavy beat at the base of rap music. He says there's clearly American hip-hop in the music, but there's also a fusion with trumpets, bongos and windpipes. That gives it a Bolivian twist.