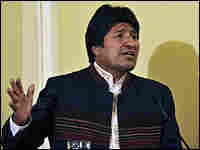 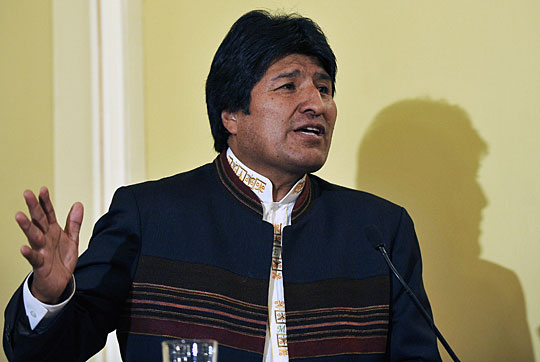 The political crisis in Bolivia and the expulsion of the U.S. ambassador from La Paz has brought Bolivian President Evo Morales into the hemispheric limelight and focused attention on his dispute with the U.S. over his left-leaning economic policies and the growing of coca leaves, the raw material for cocaine.

Morales accuses the U.S. of conspiring with his right-wing opposition and inciting anti-government protests in the country's resource-rich eastern regions that have left at least 10 people dead. The U.S. State Department accuses Morales of undermining some 25 years of cooperation between the two countries on drug eradication programs.

Morales' career and his political rise have been closely tied to the growing of coca. The 47-year-old president is an Aymara, one of the indigenous peoples of the Andean uplands. He was one of seven children born into a poor farming family and grew up herding llamas and growing crops, including coca leaves.

Coca is widely used by native peoples in the Andes. Chewed or brewed into tea, it acts as a mild stimulant and suppresses hunger, thirst and fatigue. But the active ingredient of coca is the alkaloid cocaine, and it's the subject of intense eradication efforts by the United States and other countries.

Morales joined a union of coca farmers in the early 1980s and was elected general secretary in 1985. In 1988, he was elected executive secretary of a loose confederation of coca growers unions, a post he still holds. The position put him in direct opposition to the Bolivian government's policy, which was to eradicate coca, with aid from the United States.

Morales argued for a policy that would allow coca cultivation for traditional uses while banning the illegal traffic in cocaine. He was jailed several times by the Bolivian government, and once beaten and left for dead by political opponents.

From Union Organizer To Politician

In 1995, Morales helped found a political movement of farmers and indigenous people, and two years later he was elected to parliament. The party eventually became known as the Movement Towards Socialism — its Spanish acronym, MAS, is also the word for "more."

Morales was expelled from Bolivia's parliament in 2002 for suggesting that coca farmers should mount armed resistance to the government's attempts to eradicate their crops. That same year, he pulled off a surprising near-upset, coming in second in the country's presidential election.

MAS kept up pressure on the government with sometimes violent demonstrations and roadblocks that eventually forced the resignation of President Carlos Mesa Gisbert. In 2005, Morales ran again for president and won.

He embarked on a world tour that included visits to Cuba's former president, Fidel Castro, and Venezuelan President Hugo Chavez as well as European leaders such as French President Jacques Chirac.

Within a few months of taking office, Morales nationalized all of Bolivia's natural gas reserves, the country's most important resource. In doing so, he emulated Chavez, who is widely considered his biggest ally. During the current crisis, Chavez, saying he was acting in solidarity with Morales, expelled the American ambassador from Caracas and withdrew his own envoy from Washington.

A year later, Morales nationalized a major metal-smelting plant, saying the Swiss company that owned it had been guilty of "a lack of transparency in its financial dealings." The firm had been privatized by a conservative Bolivian government in 2000.

Around the same time, he accepted a loan from Venezuela to help build two plants to process coca leaves into tea and chewing mixtures. The move prompted renewed criticism from the U.S.

Morales' economic policies have met with opposition from many of Bolivia's regional governments, known as departments. The opposition is particularly strong in departments such as Santa Cruz and Tarija, which have substantial oil, gas and other resources. Governors in those regions have called for more autonomy from Bolivia's central government. Morales denounced those moves as an effort to break up the country.

Protests and counterprotests in La Paz and other Bolivian cities have turned violent over the summer, leading to the deaths of at least 10 people. Morales has scheduled talks with his main opponents.