Accessibility links
The High Kings: Irish Balladeers In Studio 4A The all-male vocal quartet, which draws its name from the supreme rulers of yore, has been selling out Irish stadiums with harmony-drenched folk songs. Now on tour in North America, the group visits NPR for a studio performance and interview.

Listen
The High Kings: Irish Balladeers In Studio 4A 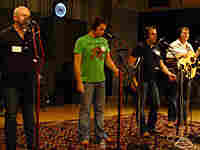 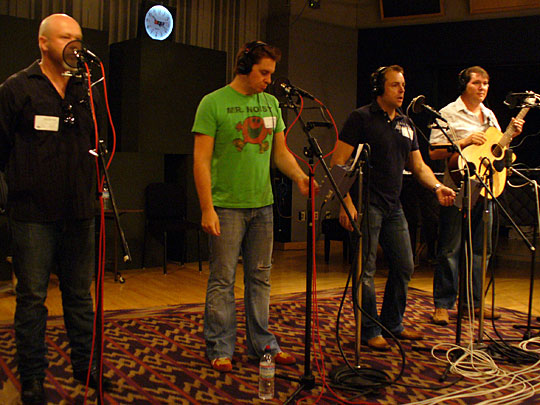 The High Kings in NPR's Studio 4A.

Hear The High Kings perform in NPR's Studio 4A: 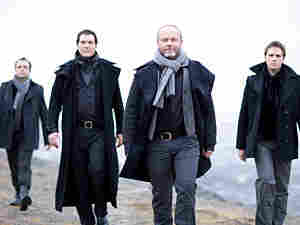 In ancient days, Ireland was ruled by the high kings, the supreme rulers of the land. When their reign ended, their legends continued through stories and songs.

"They were looking for a name that would, you know, include everyone in Ireland, really," Furey says. "The way the music is all-embracing — it belongs to everyone. You know, the high kings 'disbanded,' for want of a better word, so long ago in history that nobody really knows where the royal blood lies in Ireland, or who's the real families. So we just thought everyone in Ireland can claim to be royalty."

The High Kings made NPR's Studio 4A one of their stops on their tour of North America. Between performances, the quartet sat down with Liane Hansen to talk about how they got together.

"We all were aware of each other for many, many years, performing different venues and concerts around Ireland," Holden says. "Every time we would cross paths doing whatever, we would always say, 'We should get together and form a group.' Because whenever we sang, people just commented on the harmonies and the rapport and the charisma that ... was coming from us."

Each member of The High Kings comes from an extensive musical background. Clancy's father was one of the Clancy Brothers, whose 1960s work is often credited with popularizing traditional Irish music in the United States. Holden and Dunphy have both appeared in several high-profile musicals; Holden also toured with the Irish boy band Boyzone, while Dunphy starred in Riverdance.

Furey comes from a family of traveling musicians — his father was a champion Irish piper — with "fiddle and mayhem in tow," he says. "But my father wanted me to be an airline pilot and a barrister. I think because in case he got into a fight when he was drunk on an airplane, I could maybe fly him home and I should represent him [in court]."