Accessibility links
Peace Day Film Brings Jude Law To Afghanistan Jude Law and documentary filmmaker Jeremy Gilley went to Afghanistan to promote the U.N. International Day of Peace with a new film, The Day After Peace. The Day of Peace, scheduled for Sept. 21, seeks to pause conflict for a day. 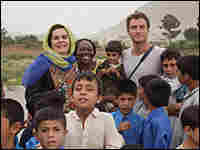 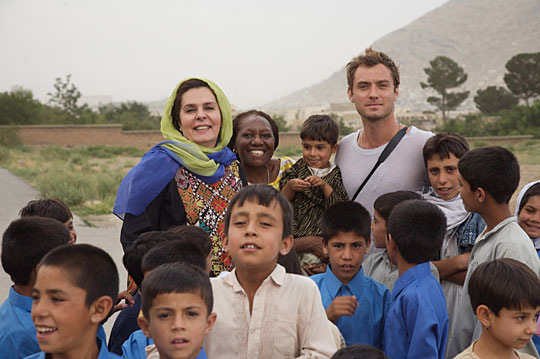 Jude Law worked on the documentary The Day After Peace with filmmaker Jeremy Gilley. 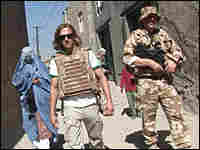 Jeremy Gilley, filmmaker and Peace One Day founder, on a patrol in Afghanistan. peaceoneday.org hide caption 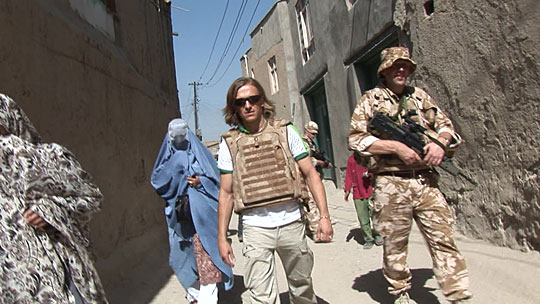 Jeremy Gilley, filmmaker and Peace One Day founder, on a patrol in Afghanistan.

The United Nations has named Sept. 21 the International Day of Peace, a day when everyone involved in conflicts worldwide is asked to lay down their weapons for a day.

But as Jeremy Gilley, a British filmmaker and staunch supporter of the event has learned, getting people to observe a cease-fire even for one day isn't easy, especially when you pick a place like Afghanistan.

Gilley filmed a documentary in Afghanistan to show people how it should work. He got the help of film stars like Jude Law to spread the message. Both men went to Kabul recently to unveil the film.

Gilley says he learned the hard way that filmmakers do not necessarily make good diplomats. The Day After Peace documents Gilley's attempt to persuade the Arab League to support the Day of Peace.

Gilley meets with Arab leaders who have just seen a video endorsement from Israel's former Prime Minister Shimon Peres. Not a good move, he discovers, given that most Arab states view Israel as a warmonger, not a peacemaker.

Gilley documents such setbacks in this, his second movie about his difficult quest to make Peace Day a reality. And as is often the case in films, Hollywood stars like Jude Law come to the rescue.

Law accompanied Gilley to Afghanistan this month to promote the film and to persuade Afghans to mark Peace Day.

It's a message they deliver at the fortified United Nations compound in Kabul.

"Everything starts with one step, or one brick, or one word or one day," Gilley says.

Unshaven and sporting a close-fitting suit, Law embraced his role as an ambassador of peace in a war zone. The actor, who has played war-weary soldiers in films like Cold Mountain and Enemy at the Gates, calls The Day After Peace the most important film he's ever done.

But Law's family wasn't too crazy about him coming here.

"Well, there was a certain amount of concern," Law said. "But you know, I'm proud to be a part of something very constructive and positive, and I think sometimes it's very easy to sit in the West and discuss change and discuss what's going on in the world. But I think you've got to go places and see it, and sometimes put yourself in that situation.

Law and Gilley note the success of a similar appeal they made last September during their first trip to Afghanistan. On last year's Peace Day, UNICEF joined with other aid workers to vaccinate some 1.5 million Afghan children, mostly in Taliban strongholds like Helmand province, after the Taliban gave them a rare guarantee of safety.

The movie shows the vaccinations as well as a concert in London, where Law tells the audience that Peace Day in Afghanistan is working. He says 82 separate events promoting peace were held across the war-torn country last Sept. 21.

But what the movie fails to mention is that on the same day, NATO announced that 82 people were killed in Afghanistan — all but one of them in Helmand province.

"Unfortunately, the history of this particular country has been that it's not that extraordinary — that people have lost their lives, on whatever side, and that civilians have been involved for whatever reason," Law says. "What is extraordinary is that something positive happened."

On the streets of Kabul, many Afghans lauded the actor and filmmaker for their effort, but few of those interviewed felt it would make any difference.

"Day by day, the people is dying in Afghanistan, you know this," says Taweed David, who bought DVDs in a store where Law's movies were on display.

"The world knows this. Our country is never going to be in a good situation, I think."

Reached by phone, a Taliban spokesman dismissed Peace Day as Western nonsense. But he says that Taliban leaders are considering allowing health workers to come into their strongholds again on this year's Peace Day to vaccinate more children.