Jennifer Ouellette's book The Physics of the Buffyverse explores the very real principles of science in a not-so-real world: the long-running TV series Buffy the Vampire Slayer.

Unidentified Woman: Are you sure this is a good idea?

Unidentified Man #1: It's a great idea. Now come on.

"Buffy the Vampire Slayer" debuted on television as a midseason replacement show in 1997. The show was an unexpected hit, lasting seven seasons. And now, season eight has just debuted as a comic book.

The premise of the series is that 15-year-old Buffy Summers moves to Sunnydale, which just happens to be located on top of a hellmouth, a gateway to another dimension populated by vampires, monsters and all manner of hell gods. Buffy discovers that she is a slayer. There is one born every generation who is endowed with the strength and skill to keep demons at bay and prevent hell from erupting on earth.

Creator Joss Whedon intended the series to be a metaphor for how high school can seem like hell for teenagers, but his fictional hell was literal. And although Whedon takes liberties with the actual laws of science, Buffy's universe does contain some real elements of science.

Jennifer Ouellette has written a new book, "The Physics of the Buffyverse," and she's in our Washington studio. Welcome back.

Ms. JENNIFER OUELLETTE (Author, "The Physics of the Buffyverse"): Oh, thanks very much.

HANSEN: When you mentioned to physicists that you were writing a book about the physics of a fictional universe, how was that received?

Ms. OUELLETTE: Well, obviously, it was received with some skepticism. I endured a certain amount of good-hearted teasing. The most common reaction would be a blank stare, followed by: Isn't that a show with the blonde girl fighting vampires? And I would say yes, it was. And they'd look at me, and they'd go, well, vampires aren't real, you know?

Ms. OUELLETTE: I think they kind of missed the point.

Ms. OUELLETTE: But I was fortunate that some actually did get it and were very helpful in sitting down with me and hashing out ways in which science could be applied through the lens of the Buffyverse.

HANSEN: Let's talk about vampires. There is, sort of, a scientific explanation, biological in nature, right?

Ms. OUELLETTE: Well, that's a little dicey. There's a disease called porphyria, which is a disease of the blood, essentially. They need certain enzymes in the blood and they can't have it, so by getting transfusions of blood, they can make up for that. They tend to be very sensitive to sunlight. They can have that horrific Nosferatu appearance in the most extreme cases, things like that.

HANSEN: Is this the equivalent of a wormhole?

Ms. OUELLETTE: The hellmouth actually is a different parallel universe or world, and - well, the hellmouth itself is probably a portal to hell, essentially. There are portals, dimensional portals, throughout the Buffyverse, and they do share some attributes with the notion of hypothetical wormholes in physics. So I had a little bit of fun with that in one of the chapters.

HANSEN: Let's talk about some of these demons: Queller and the Fyarls?

HANSEN: Fyarl demons, and they have a unique way of paralyzing people: slime.

Mr. ANTHONY HEAD (Actor): (As Giles) Do I have special powers?

Mr. MARSTERS: (As SPIKE) Paralyzing mucus, shoots out through the nose, sets up fast, hard as rock. Pretty good in a fight.

Mr. HEAD: (As Giles) Are you making this up?

Ms. OUELLETTE: The Queller demon is the thing from outer space. It essentially vomits up this slime onto the face of the person. It slowly suffocates them. The Fyarl demon does the same thing, it's got a mucus thing, which shoots out of its nostrils.

But actually, slime is a very effective defense mechanism, and there is a creature in real life called the hagfish - it's this disgusting eel-like creature - and it essentially excretes this slimy, you know, basically slimy mucus thing that interacts with the saltwater. And even though it doesn't dry and harden and suffocate, what it does is it can entangle up its prey.

Ms. OUELLETTE: But I know that the Army, for instance, is looking into possibly using this as a defense to clog up propeller blades of enemy boats, things like that.

HANSEN: Yes. I mean, all - the whole book is about the Buffyverse being steeped in science. Tell us about the astronomers and what they found in December of 2005.

Ms. OUELLETTE: That was a wonderful little item that I stumbled across while I was wrapping up the book. Lots of people are "Buffy" fans, and it turns out a lot of astronomers are, as well. They found an unusual object in space, sort of an asteroid-type object. Its orbit was just wacky. It just did not fit into any of the prevailing theories. They really couldn't figure it out. There's no, you know, obvious scientific explanation for why its orbit is so strange, so they called it Buffy.

Ms. OUELLETTE: Yeah. I don't know if that name stuck, but it was a great idea.

HANSEN: Do you think this book, in some way, is a portal for "Buffy" fans to get interested in science?

Ms. OUELLETTE: I would hope that it would be. That was certainly my intention in writing it. I'm a former English major, so my approach to science tends to be a little bit different. I think if I had had a book like this when I was in high school, I would've been much more open to learning about physics. I would've been much less intimidated, and it would've helped me remember certain concepts.

If I have something visual that I can think of, it will help me remember a basic concept because certain things in physics are counter-intuitive. They're tough to retain. I think it would've been a big help.

So what I'm hoping is that people will like this book enough to kind of branch out and explore and find their favorite subject and read a little bit more about it, perhaps.

HANSEN: Jennifer Ouellette is the author of "The Physics of the Buffyverse," published by Penguin. Thanks for coming in.

Ms. OUELLETTE: Well, thanks for having me.

HANSEN: This is NPR's WEEKEND EDITION. 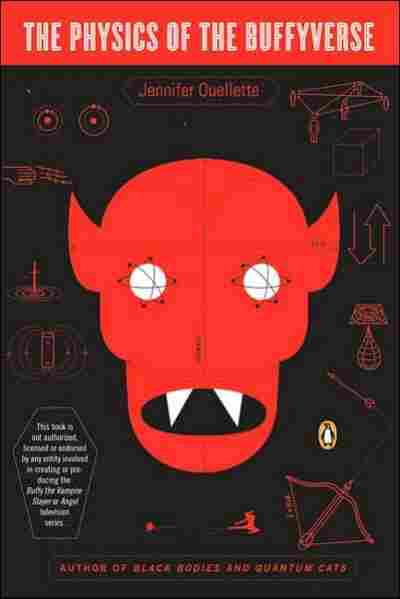 The Physics of the Buffyverse

Title
The Physics of the Buffyverse
Author
Jennifer Ouellette