Wallace's wife told police that he'd hanged himself. He was 46.

Wallace developed a cult following in the 1980s with his early works, but it was Infinite Jest that gained him widespread attention. The novel was set in the future, in an era of hyper-commercialism. It revolved around a fictional film that was so entertaining, anyone who watched it could die — because they wouldn't want to do anything but watch it.

Infinite Jest featured a massive cast of characters, sprawled across more than 1,000 pages. And there were hundreds of footnotes.

In 2005, Time magazine named Infinite Jest one of the 100 best English-language novels since 1923. But Wallace told PBS's Charlie Rose that he found the attention a little strange.

"I didn't read a lot of the reviews, but a lot of positive ones seemed to misunderstand the book. I wanted it to be extraordinarily sad and not postmodern or fractured, and most of the reviewers that really liked it seemed to like it because it was funny, or it was erudite, or it was interestingly fractured," Wallace said.

A year after Infinite Jest was published, the MacArthur Foundation awarded Wallace a "genius grant." 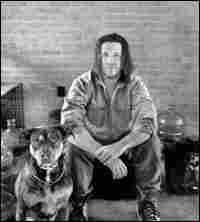 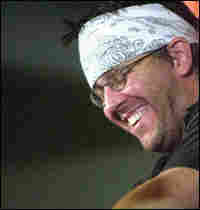 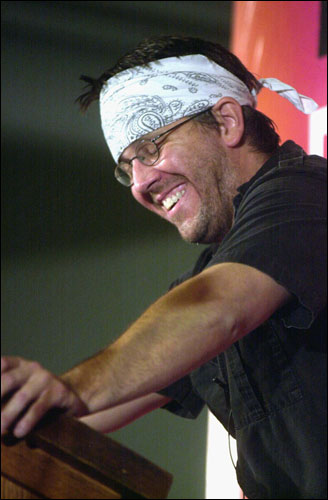 Wallace reads selections of his writing during the New Yorker Magazine Festival in September 2002.

To read David Foster Wallace was to feel your eyelids pulled open. Some writers specialize in the away-from-home experience — they've safaried, eaten across Italy, covered a war. Wallace offered his alive self cutting through our sleepy aquarium — our standard TV, stores, political campaigns.

Writers who can do this, like Salinger and Fitzgerald, forge an unbreakable bond with readers. You didn't slip into the books looking for story, information, but for a particular experience. The sensation, for a certain number of pages, of being David Foster Wallace.

He invented a new style and a new comedy. The style — sharp, loaded with footnotes and asides — was the unedited camera. The feed before the director in the van starts picking cuts and themes. The comedy was of a brain so big, careful and kind it kept tripping over its own lumps.

In stories and essays, Wallace was drawn to a conflict: How can you live well, and how do you do it without damaging other people, embarrassing yourself? This comedy was the difference between the benign airbrush we put to experience, and the messes we actually generate.

Reporting on a lobster festival, he didn't review the food, the crowds. His attention went to the shellfish in the pot. For all his humor, what seemed to interest and trouble Wallace was that no matter how wide we smile, there's always a little meat sticking to our teeth.

I spent a week interviewing Wallace, after the 1,000-page novel Infinite Jest made his name. He was faultlessly polite. He lived alone with two dogs. He told me the best books were "a conversation about loneliness." He said, "If a writer does his job right, what he basically does is remind the reader of how smart they are. Wake the reader up to stuff that reader's been aware of all the time."

For someone whose trademark became brilliance, his sense of himself was modest, workmanlike. "I am probably not the smartest writer going," he said, "but I work really, really hard. You give me 24 hours in a room by myself, alone? Then I can be really, really smart."

He talked about shyness, the "greasy thrill" of being famous — "A little part of me likes it," he said, "but that part doesn't get to steer."

He talked about being lonely, the fear that his tussle "with burly, psychic self-consciousness figures" might get so bad he'd do damage to himself.

He talked about a friend's unsuccessful try at suicide, how it scared him off. He laughed. "I just, just — I knew that if anybody was fated to screw up a suicide attempt, it was me."

Well, he succeeded. When someone very gifted kills themselves, it's like the best student dropping out of high school. There's the tragedy, but it's set in a particular and personal fear: What are they seeing that we don't? The loss to his family is impossible to imagine. The loss to us is easy.

No writer saw the era as clearly. Wallace's readers counted on him to go on, progressing distantly but alongside us, filing new reports every couple of months, helping us remember how smart we were, inviting us into his crisper world. In his last book of fiction, he wrote a story about suicide, about "emerging from years of literally indescribable war against himself," and ending with the sentence, "Not another word."