Accessibility links
Ex-Finance Ministers Offer U.S. Economic Advice Financial leaders from around the world met last week to discuss global economic stability. Some of them suggested it's time for the United States to take international advice. Their input comes as the U.S. prepares for an examination by the IMF. 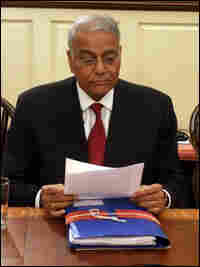 When the U.S. Treasury stepped in to save Fannie Mae and Freddie Mac this month, the public got a reminder of just how interconnected the economies of the world have become. What began as a problem in the U.S. mortgage market, with people borrowing too much to buy houses here, ended up threatening to drag down the entire global economy.

With the news of the Fannie and Freddie bailout still unfolding, former finance ministers from around the world met last week to discuss global economic stability. Some of them had a polite suggestion for the U.S., namely that a little international advice might have helped stave off the crisis.

The ministers met at the University of Virginia, beneath the grand dome where Thomas Jefferson once kept his library. They were cordial, but also frank. Maybe the U.S. should get a financial checkup, they suggested, from the International Monetary Fund.

"Now I think the time has come," said Yashwant Sinha, former finance minister of India. "After the crisis here ... the U.S. should accept some monitoring by the IMF." Sinha thinks an IMF review might have sounded an additional warning about America's still-unfolding mortgage crisis.

It's worth noting that the IMF is the world agency that countries turn to when they're in serious trouble, as Argentina has done during its recent flirtation with the brink. The IMF functions as a kind of global loan shark. Nations get money, but with a lot of strings attached. The IMF also doles out advice. A bunch of experts come to your country and conduct interviews. They look at your books and write a report.

In practical terms, it's not a big deal. But symbolically, what Sinha is suggesting would carry a lot of weight. Sinha says the U.S. has a history of giving advice to other countries about how to run their economies. It hasn't always been so good about listening. But he thinks it needs to get better.

"The U.S. economy is the largest in the world," he says. "Anything that happens in the U.S. or to the U.S. economy has worldwide repercussions, so many countries ... suffer for no fault of their own."

The U.S. Treasury says America has now agreed to get a stability assessment from the IMF. The announcement didn't get much attention, but officials at the IMF expect to start examining U.S. finances in the next couple months.

Rodrigo de Rato, a former finance minister of Spain and former head of the IMF, says lots of countries have been through the assessment — not just poor ones. De Rato rattles off a quick list, including Spain, Italy, the United Kingdom and India. The idea, he says, is to search for weak spots in the economy. The IMF looks at how investors manage risks in the market. Unhealthy risks helped bring down institutions like Lehman Brothers just this past weekend.

An IMF review now is only fair, de Rato argues. "It will allow a discussion of issues that maybe are politically sensitive and give a sense of evenhandedness in the world," he says.

At least one American at the conference, former U.S. Treasury Secretary John Snow, didn't place much faith in the process. "IMF has no particular expertise," Snow says. "Does anybody think that if we had 15 more Ph.D.s at the IMF, we'd have stopped this process? We'd have caught it? Hah."

Still, participants at the conference pointed to a shift in America's role in the global economy. They seemed frustrated that Wall Street has stumbled into crisis. As one person put it, "I think even my 6-year-old daughter knows that you don't lend money to people who can't pay you back."