Accessibility links
Hunt Is On For Generators, Gasoline In Houston Basic necessities are still out of reach for many people in Houston in the wake of Hurricane Ike. Few stores are open, and those that are have long lines of customers. One Home Depot that was open had people swarming for generators and other supplies.

Listen
Hunt Is On For Generators, Gasoline In Houston

Basic necessities are still out of reach for many people in Houston in the wake of Hurricane Ike. Few stores are open, and those that are have long lines of customers. One Home Depot that was open had people swarming for generators and other supplies. 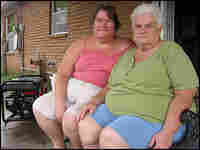 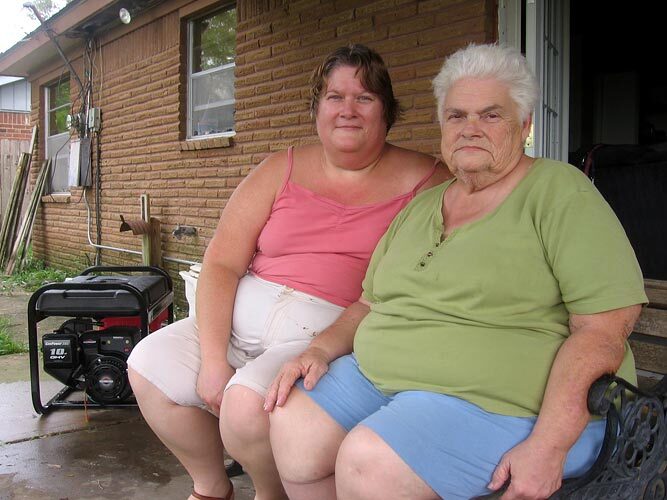 Evelyn Al-Dubais (left) and her mother, Linda Coen, of southwest Houston lost power during Hurricane Ike. On Sunday, they went to Home Depot to buy a generator.

With clean water and electricity so scarce in Houston, many stores are closed. A few are open, though, and NPR's Ari Shapiro visited one of them yesterday. He met two women trying to put their lives back together.

ARI SHAPIRO: At the only Home Depot that's open for miles, people are lined up around the block. There's a police officer keeping the line in order. The store will only let customers in one at a time escorted by an employee. They don't want chaos, and they know that everyone is here to buy the same thing.

Ms. EVELYN AL-DUBAIS (Houston Resident): Generator, like everybody else.

Ms. LINDA COEN (Houston Resident): I was here yesterday, and the gentleman put my name on a list. He says, I'll call you as soon as the truck gets here. Never heard from him.

Ms. COEN: And I told him it was for medical reasons.

SHAPIRO: Linda's 50-year-old son, Mike, needs a machine to help him breathe. When they lost power during the storm, he started gasping.

Ms. COEN: With it being so stuffy in the house without any air coming through or anything, he just would not have made it in the house last night.

Ms. AL-DUBAIS: He would have died during the night.

Ms. COEN: We even took him out and rode around, so he could have the air in the car.

SHAPIRO: What was going through your mind while that was happening?

Ms. COEN: That he was going to die.

SHAPIRO: Saturday night, Linda found a motel room for her son. They can't afford it, but at least there's electricity for his breathing machine. Now they're hoping they don't have to pay for another night at the motel, hoping the store doesn't run out of generators before they reach the front of the line. Frankly, she says, they can't really afford a generator, either. The cheapest model is $600.

Ms. AL-DUBAIS: There's going to be a lot of bills that need paying.

Ms. COEN: If our bill collectors know our address, I think they know we had a little bit of problems in this area.

SHAPIRO: Are you worried about the bills getting paid, or is that a worry for another day?

Ms. AL-DUBAIS: Well, yes. Yeah, but you can't get blood out of a turnip.

Ms. COEN: You know, mothers worry more. That's what we are, worriers.

SHAPIRO: The line snakes inside the store. A man drives a forklift carrying stacks of generators. The back aisles are full of wooden pallets holding gas cans and flats of water. It is not a normal day at Home Depot. The rule is one generator per family.

We're at the front of the line now, standing in front of this orange, metal gate manned by a police officer. And they're through. A man puts a generator in their shopping cart. They pick up extension cords and empty gas cans, and they head to the checkout counter.

Ms. COEN: Now the problem will be to find gasoline to go in the generator.

SHAPIRO: It is a problem. They drive around for nearly an hour. Every gas station is closed. Without gas, they've just bought a $600 paperweight. Finally, they spot a Sam's Club with gas pumps out in front. Cars are lined up across the parking lot. And for the second time today, mother and daughter go to the back of the line and wait.

Ms. COEN: I'll be relieved when we get up there and get the gas.

Ms. AL-DUBAIS: Apparently the truck at the pump has been filling up several containers of gas, and the other cars behind him are getting a little disgusted. We have one woman standing out her car door with one foot propped up and her other hand on her hip shaking her head.

SHAPIRO: Eventually, the woman goes and confronts the truck driver. The truck pulls away, and the line moves.

Ms. COEN: You don't realize the necessity of water, lights, things you take for granted, until you can't have them.

SHAPIRO: By the time they get to the front of the line, twice as many cars are waiting for gas as when these women arrived. Evelyn Al-Dubais fills up two plastic, 10-gallon containers. By the time she's done, it's like the stress has flowed out of her shoulders and into the gas cans.

Ms. AL-DUBAIS: Oh, I think I'm good to go. Getting closer to the goal.

SHAPIRO: When they pull into the driveway of their house, it's obvious a generator is not their only concern. A tree fell through the roof during the storm. Eight neighbors they had never met before came over and patched it on Saturday. But the house is still damp, and they have to boil tap water before they can drink it. The fence in the backyard is gone. They've built a temporary enclosure so the four dogs don't run away. Linda Coen apologizes for the clutter.

Ms. COEN: I don't think we'll ever get the house clean. And we have come in in the dark, and we can't see what we're doing. So whatever we have, we just lay it down.

SHAPIRO: The latest addition to the clutter is the generator's cardboard box. The generator itself is in the backyard. Evelyn pours in the gas, and without much fanfare...

(Soundbite of generator starting up)

SHAPIRO: Now her brother can come home, and the next phase of their recovery will begin. Ari Shapiro, NPR News, Houston.