Accessibility links
Galveston Residents Evacuate A Ravaged City Galveston is without power and an estimated 80 percent of structures are damaged. Residents who chose to stay through Hurricane Ike are now being asked by officials to leave. From Galveston, John Burnett talks with Robert Siegel about the evacuation.

Galveston is without power and an estimated 80 percent of structures are damaged. Residents who chose to stay through Hurricane Ike are now being asked by officials to leave. From Galveston, John Burnett talks with Robert Siegel about the evacuation. 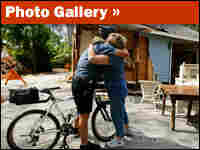 Well, now, to Galveston. Hurricane Ike passed directly over the island, and parts of it are in ruin, as NPR's John Burnett reports.

JOHN BURNETT: Try to imagine a touristy, seaside strip of business, souvenir shops, seafood, rentals, bicycle rentals and then a giant comes along with a leviathan weed wacker. That's what parts of Galveston, Texas look like today, shattered, splintered, and pulverized. The worst damage, for obvious reasons, faces the Gulf. As you head westerly, away from the sea wall, the destruction is less, but still, the city manager estimates 80 percent of the island's structures suffered some type of damage, from missing shingles to total obliteration.

Thankfully, many of the island's historic landmarks, such as the Bishop House and the Galvez Hotel, appear to have come through the storm fine. But this graceful, old Texas seaport took a frightful beating, and today, more and more of the stalwarts who rode out the hurricane are deciding it's time to go. Ginger Cotham(ph), with her colorful tattoos and purple velvet pants, waits to board a big, white tour bus heading for a shelter in San Antonio.

Ms. GINGER COTHAM (Galveston, Texas Resident): Oh, man, it was wild. I saw everything. I heard the noise. I went outside during the eye. I had a flood in my grandma's house. I had to swim to get out and get to the top of the house. Man, something else. I've never experienced anything like this in my life.

BURNETT: So why are you leaving today?

Ms. COTHAM: I can't deal with the sewage, the electricity. And my son's already in San Antonio with my mom and my family.

Unidentified Man: Yeah, I can't live without my HDTV.

BURNETT: A bystander adds his two cents. Also waiting in line to board the bus is a construction worker named Steve Losh (ph), who's cradling an arthritic poodle and helping his elderly mother.

Mr. STEVE LOSH (Galveston, Texas Resident): We, unfortunately, stayed in our house. It totally flooded up to here, about four feet.

BURNETT: About up to your chest?

Mr. LOSH: Yeah. Very dirty situation to have to live in it. We've been trying to get out of here because our cars won't start. You know, the batteries are dead from the, you know, the water. They just got all logged and the, just, it was a really horrible situation. The stench in the house is unbearable.

BURNETT: Relief services appear to be well organized. Buses carry evacuees out of town. The National Guard is handing out ice, water, and MREs. The Coast Guard and FEMA are conducting search and rescues. Police patrol the streets. So far, they've arrested 11 people for looting. At a noon press conference today, Mayor Lyda Ann Thomas said it would be weeks, if not months, before all the water, gas, and electricity are restored in Galveston. The hospital is not functioning, either. The streets are choked with storm refuse. She implored the 15 to 20,000 of her citizens still in the city to heed her message.

BURNETT: As with all Gulf Coast hurricanes, some people are stubborn. Angel Marshman (ph) walks his two dogs on a tree shaded avenue in a pleasant early autumn breeze. He says he and a group of friends have stockpiled food and water, and they're not budging.

BURNETT: Are they going to force you off the island?

Mr. MARSHMAN: No, they can't. They cannot. That's my civil right.

BURNETT: Authorities are particularly concerned about a group of two dozen, mostly elderly residents, holed up in the Somerset Retirement Village, a block from the sea wall, which got hit hard but is still liveable. Some residents vow to stay. Others say enough is enough. John Mann (ph), a 76-year-old retired police officer, has lived there for 22 years and prided himself on staying through the last 10 hurricanes.

Mr. JOHN MANN: This was, by far, the worst that I've ever seen.

BURNETT: Now, he's packing suitcases for himself and his wife, Mary.

Mr. MANN: We're going to try to get out of here, either today or tomorrow. My wife is a very bad diabetic, and she also has cancer. She has to take chemo treatment Friday. That's the reason I'm going to get out now.

BURNETT: The mayor perhaps summed up the sentiment in the city today. She said, sometimes, the aftermath of the storm is worse than the storm itself. John Burnett, NPR News, Galveston.