Accessibility links
Galactic With Mr. Lif On Mountain Stage For its latest album, the New Orleans funk band laced a new element on top of its groove-based jams: hip-hop MCs. On tour, Galactic visited Mountain Stage with one of its guest stars, Boston rapper Mr. Lif. 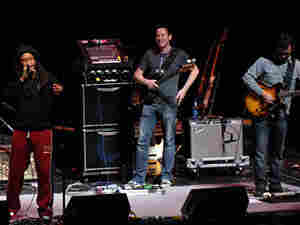 Galactic has been developing its eclectic funk sound for more than a decade, following in the footsteps of great instrumental combos like The Meters and the JB's. But for its sixth record, From the Corner to the Block, the New Orleans outfit enlisted a wide array of guest vocalists and hip-hop MCs to lay vocals over its groove-based jams. Contributors include local superstar Juvenile, Mardi Gras ringleader Big Chief Monk Boudreaux and Northern California's Lyrics Born.

When it toured in support of the album, Galactic brought along one of the record's featured vocalists, Boston-based rapper Mr. Lif. At West Virginia University in Morgantown, W.Va., Mr. Lif gets the crowd involved before leaving the stage for the dirty, alarm-like instrumental "FEMA." Mr. Lif returns to close the set with "...And I'm Out," his featured track on From the Corner to the Block.