Accessibility links
Atlanta Cracks Down On Panhandlers Warning to Atlanta's panhandlers: Don't expect handouts anymore. City officials are encouraging tourists and Atlantans to drop coins in "donation meters" instead of giving directly to panhandlers. The first one recently went up in front of City Hall. 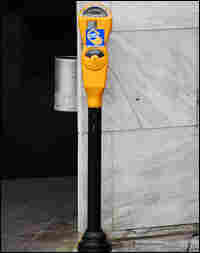 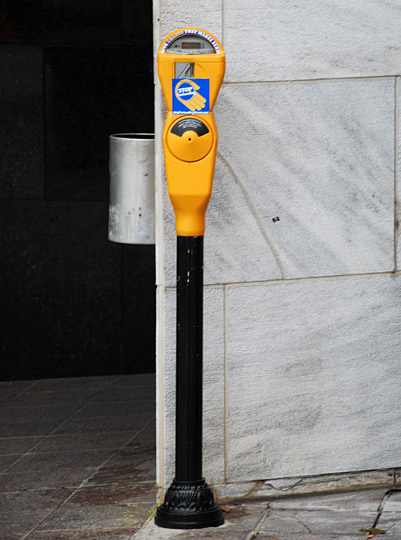 The first of several donation meters planned for downtown Atlanta.

Warning to Atlanta's panhandlers: Don't expect handouts anymore. City officials are encouraging tourists and Atlantans to drop coins into what look like parking meters — instead of giving directly to panhandlers.

Officials unveiled the first of these donation meters at City Hall last week. Atlanta officials, who say panhandlers are aggressive and target tourists and convention-goers, say tourists cite panhandling as a major reason they will not return.

The meters have been installed in other cities, including San Francisco, Baltimore and Denver.

Atlanta Mayor Shirley Franklin says there are plans for more around the city.

For years, Franklin and other city officials have been trying to figure out a way to reduce panhandling.

"To give to panhandlers is counterproductive," Franklin says

The donation meters look like bright yellow parking meters. Money collected from the meters will go to agencies that help the homeless. They are part of a new campaign to crack down on panhandling, called "Give Change That Makes Sense."

The debate over what to do about panhandlers has been going on for years. In 2005, the city passed an anti-panhandling law in an effort to improve its image and attract tourists. Last month, police officers dressed up as tourists and arrested about 50 people who violated the law. Now, the city is asking everyone who goes downtown to donate through the new meters in the hopes that panhandlers will go away.

A.J. Robinson, president of Central Atlanta Progress, a business revitalization group working with the city, says there are many aggressive panhandlers on the streets.

"These are folks that are preying on not only the business population, but also the tourist population. It's become a business, as opposed to an act of charity," he says.

But homeless advocates say hustlers are the exception.

Anita Beaty, with the Metro Atlanta Task Force for the Homeless, says the city should stop criminalizing the poor and instead build more affordable housing.

"I think the city should open its eyes and ears, and be creative and progressive," she says. "How do we deal with the fact that we do have poverty, and we can not hide it, nor should we."

The city has built a new 24-hour service center to help the chronic homeless. But Beaty still houses hundreds of men each night in what she calls an overflow shelter.

In Woodruff Park downtown, Jerry Roberts, who works in the area, says cracking down on panhandlers is wrong.

"If you build a state-of-the-art housing facility, food, clothing in the downtown area, you resolve it. But they want it to go away magically," Roberts says.

Toni Harris, who also works downtown, says panhandlers do sometimes bother her. But she says she's not sure whether the new campaign will change things.

"Hopefully, it will help calm down some of the panhandlers, but then again they're still out here. People like that don't even get the funds. If they don't go to the agencies, then they are still going to be out here," she says.

The city will start with five donation meters and is stepping up police enforcement of the panhandling ordinance. Businesses and hotels now have flyers and posters that list resources for the homeless, advice for tourists and warnings for those who still want to want to give to panhandlers.

More on Atlanta's "Give Change That Makes Sense" Campaign