Accessibility links
Gen. Petraeus Ends Time In Iraq With Handover Gen. David Petraeus has handed over control of U.S. forces in Iraq to his longtime deputy, and headed back home where he will take charge of U.S. Central Command, with responsibility for the wars in both Iraq and Afghanistan.

Gen. David Petraeus has handed over control of U.S. forces in Iraq to his longtime deputy, and headed back home where he will take charge of U.S. Central Command, with responsibility for the wars in both Iraq and Afghanistan. 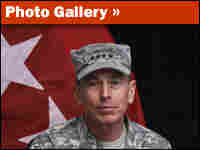 The Change of Command ceremony

At a ceremony in Iraq today, General David Petraeus handed over authority to General Ray Odierno. Defense Secretary Robert Gates made the trip to Baghdad for the event. General Petraeus is headed home to the U.S. to take over Central Command. In his new job, he'll oversee the U.S. military throughout the Middle East and Central Asia, including Iraq, Afghanistan, and Pakistan. NPR's Lourdes Garcia-Navarro was at the handover ceremony as General Odierno was declared the new commander in Iraq.

LOURDES GARCIA-NAVARRO: And with that announcement, arguably the most famous general in the U.S. military relinquished his command here. When General David Petraeus took over in February 2007, Iraq was in the grips of a brutal civil war. His plan, now known simply as the surge, is partially credited with vastly reducing violence in Iraq. Yesterday, only three unidentified bodies were found in the capital as opposed to the dozens that used to be discovered during the height of the bloodshed. At today's ceremony, Secretary Gates lauded Petraeus' contribution to the war effort.

Secretary ROBERT GATES (Defense Department): You have dealt the enemies of the United States of American in Iraq a tremendous if not mortal blow. And I believe history will regard you as one of our nation's great battle captains.

GARCIA-NAVARRO: For his part, Petraeus ended his speech with this message for his troops.

General PETRAEUS: Thanks to all of you again for your professionalism, your dedication, and the sacrifices each of you and your families have made. You truly have turned hard but not hopeless into still hard but hopeful.

GARCIA-NAVARRO: He received a standing ovation. The challenges facing his successor, General Odierno, are different to those encountered by Petraeus 19 months ago. Instead of bringing in more troops, the U.S. is drawing down its forces here. Eight thousand additional troops will be leaving Iraq by February. Security is better, but the mantra remains. The progress here is both fragile and reversible. At his first news conference as commander of U.S. forces in Iraq, General Odierno said that he will be cautious in recommending more troop cuts.

General RAYMOND ODIERNO (Commanding General, Multi-National Force - Iraq): What I want to do here for at least the next three months through the end of the year is continue to conduct assessments, to continue to see where we're at, consult with the government of Iraq, and then make some recommendations.

GARCIA-NAVARRO: Odierno said the concern is that security could worsen if there is a sudden drawdown.

General ODIERNO: We are in a fragile state now. What I want to do is build it to a more stable, stable state. And I think we're in the process of doing it. It just takes some time, and it's slow. So, yes, that's part of what we have to do, is maintain the stability so the government can continue to grow.

GARCIA-NAVARRO: But the relationship with the government of Prime Minister Nouri al-Maliki is a delicate one. Maliki did not show up for today's ceremony. The Iraqi government has been asserting itself over the past few months, sometimes in ways that have run contrary to U.S. interests. Right now, the U.S. is locked in negotiations with Iraqis over two key issues: a Status of Forces Agreement that will determine the parameters under which U.S. troops operate here and the future of the U.S.-backed Sunni paramilitary groups known as the Sons of Iraq.

Both sets of discussions have proved contentious. The Iraqis have asked the U.S. to set a date for the withdrawal of their forces in the security talks, and Maliki's government has shown itself reluctant to fully integrate the Sons of Iraq into the army and police. Odierno, though, acknowledged that it is time for the U.S. to slowly relinquish control.

General ODIERNO: The time is changing a little bit. Iraq is becoming a more sovereign nation. Iraq is going to take on more of the responsibility. It's my job to make sure that we're able to do that in a very smooth way where we don't fall back.

SIEGEL: And you can see a timeline of General Petraeus' military career at npr.org. 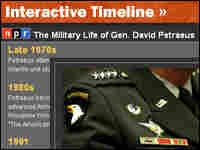 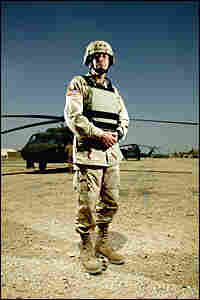 Gen. David Petraeus will hand over control of the Multinational Forces in Iraq on Sept. 16 and become chief of the U.S. military's Central Command. Brent Stirton/Getty Images hide caption 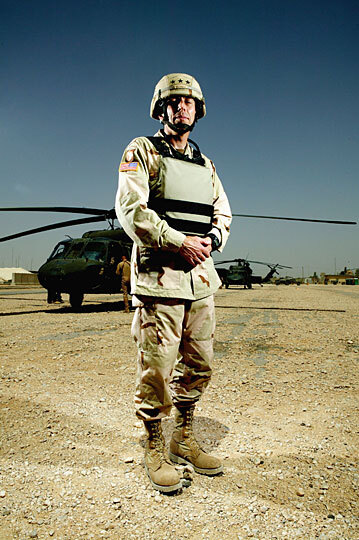 Gen. David Petraeus will hand over control of the Multinational Forces in Iraq on Sept. 16 and become chief of the U.S. military's Central Command.

The soldier credited with turning around the war in Iraq will soon be working in a wider sphere. When he becomes chief of CENTCOM, the U.S. military's Central Command, Gen. David Petraeus will find himself overseeing two wars and some of the most volatile areas on the planet.

Retired commanders and defense analysts generally laud Petraeus as a leader and strategist, but they warn that he'll have far bigger and more complex responsibilities in the new job, which he takes over on Sept. 16. He will hold sway over American military operations from Kenya to Kazakhstan.

Petraeus' predecessor and former boss, Adm. William Fallon, notes that while Petraeus has thorough experience in a key theater, Iraq, he will have to get up to speed on new areas, including the rest of the Middle East, Central Asia and the Horn of Africa.

"If you had the luxury of a peacetime environment," Fallon says, "you could focus on long-term strategies and have a reasonable time to phase them in. But CENTCOM is pretty hot. You become in many ways a hostage to current events."

Fallon himself ran afoul of the political pressures of the job. He resigned in March, after a profile in Esquire magazine portrayed him as resisting administration pressures to take military action against Iran. He said he had had no differences with President Bush over the objectives of U.S. policy in the area, but that the perception of a conflict made it difficult for him to be effective in the job.

Jeffrey White, a defense analyst at The Washington Institute for Near East Policy, says "the warp and weft of CENTCOM is political and military; it's not just fighting the wars in Iraq and Afghanistan, but it's how do you contain Iran? How do you deal with Egypt and the Saudis?"

White says Petraeus comes to the job from a position of strength as commander of all U.S. troops in Iraq, where he is widely regarded as the man who turned "what looked like a not-success for the Army into a success."

Petraeus first came to widespread public attention as the commander of the Army's 101st Airborne Division during the 2003 invasion of Iraq. The division was given responsibility for the area of northern Iraq around Mosul, and Petraeus was credited with running a successful counterinsurgency campaign that combined aggressive military action with reconstruction, economic development and promotion of local elections.

He also displayed some of the traits that have made him unpopular among some fellow officers, including intense ambition and competitiveness, qualities that have earned him the nickname "King David."

Ret. Gen. Barry McCaffrey says Petraeus' prominence triggered a backlash at the highest levels of the Army and raised the ire of then-Defense Secretary Donald Rumsfeld when Petraeus was pictured on the July 5, 2004, cover of Newsweek magazine over the headline "Can This Man Save Iraq?"

McCaffrey says that high profile went against the culture of the Army, in his words "the crunchiest of all the services." He says Petraeus, then a three-star lieutenant general, was sent off to cool his heels as commander of the U.S. Combined Arms Center at Fort Leavenworth, Kan.

Even then, says McCaffrey, Petraeus made the most of the opportunity. "He worked with [Marine Lt. Gen. James] Mattis to put together the field manual on counterinsurgency," he says.

McCaffrey says he intervened with President Bush and top administration officials, "telling them why it was crucial to get Petraeus in command in Iraq." The president gave the job to Petraeus, now a four-star general, in February 2007. He succeeded Gen. George Casey, who had opposed the troop buildup in Iraq that was to become known as the "surge."

Bucking The Chain Of Command

Petraeus went against the chain of command above him, the Joint Chiefs of Staff and Adm. Fallon, by pushing for more troops. According to The War Within by Washington Post writer Bob Woodward, Petraeus communicated directly to the president and Vice President Dick Cheney through a back-channel established by his mentor, retired Gen. Jack Keane. Keane did not respond to requests to be interviewed for this article.

Defense analyst White says Petraeus proved himself as a commander and strategist.

"He had some advantages in the sense that by the time he took over we'd learned a lot, and the administration was willing to support him fully. He also benefited from changes in Iraq," including the decision by Sunni tribes to turn against al-Qaida and the decision by Shiite cleric Muqtada al-Sadr to take his Mahdi Army out of the conflict.

"That," he says, "has to do with the way those troops were used, and that's the responsibility of Petraeus. Dave was instrumental in organizing the conventional forces on the ground to be much more effective."

A key part of the strategy was to disperse troops among the population in small combat outposts, a plan that exposed them to greater danger but also brought them into closer contact with Iraqis in their communities.

Iran Likely A Challenge For CENTCOM

As he moves into the larger arena of CENTCOM, Petraeus will face a wider set of challenges. White says in addition to the wars in Iraq and Afghanistan, a key challenge will be Iran.

"So far, the last two guys at CENTCOM, [Gen. John] Abizaid and Fallon, were both very careful and circumspect in their dealings with Iran. My sense is that Petraeus will not be an advocate for unnecessary provocation," White says.

Adm. Fallon says nothing happens quickly or easily in CENTCOM, but he's seen a dramatic change since he took over there. And, he says, Petraeus' success in reducing the violence in Iraq is part of the change.

"It's going in the right direction, but it's not going to be in a straight line. The time may not be far off when Iraq becomes part of the security solution in the region," Fallon says.

Gen. McCaffrey is even more sanguine. "There couldn't be anybody better positioned than Petraeus," he says. "He understands the situation, and he has the confidence of the commander in chief and the secretary of defense."