Accessibility links
Was 'Adult Supervision' Needed On Wall Street? The bankruptcy of financial services giant Lehman Brothers and the 500-point drop in the stock market on Sept. 15 have sent shock waves through the financial community. Law professor Michael Greenberger discusses the potential ramifications of the recent turmoil. 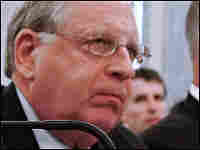 The bankruptcy of financial services giant Lehman Brothers and the 500-point drop in the stock market on Sept. 15 have sent shock waves through the financial community. Michael Greenberger, a former director at the U.S. Commodity Futures Trading Commission, tells Terry Gross that the government's decision to bail out AIG is a sign that the economy is "teetering on the brink."

"The Fed and the Treasury are very, very worried about the stability of the economy," Greenberger says. "They're worried about what this means to Main Street, about what it means to you and me. ... In the absence of this rather dramatic move I think they believe that we would enter something much deeper, possibly, than a recession."

If AIG had failed, Greenberger says, the average citizen's savings accounts and checking accounts could have been in jeopardy. But he warns that the bailout is a "50-50 proposition" and that other banks might follow.

Greenberger insists he is not a pessimist about the economy; he says that "intelligent leaders" — coupled with government aid, transparency and regulation — can enable the American economy to transcend its current troubles. But he has harsh words for the companies that were engaging in questionable practices — and for the government that turned a blind eye to the potential consequences.

Greenberger asserts that the fact that there was "no adult supervision" of Wall Street will cost the American public in the long run.

"The $85 billion will come out of the United States Treasury. And either we're going to fund that from China or you and I are going to have to pay for it through taxes," he says. "[As] a lot of people are saying now: We privatize profits; we socialize losses."

Perplexed by the U.S. economy? You're not alone. Law professor Michael Greenberger joins Fresh Air to explain the sub-prime mortgage crisis, credit defaults, the shaky future of other types of loans and what we can expect from the U.S. financial markets.

Greenberger is a professor at the University of Maryland School of Law and the director of the University's Center for Health and Homeland Security.