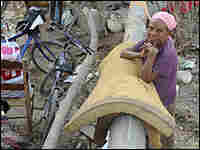 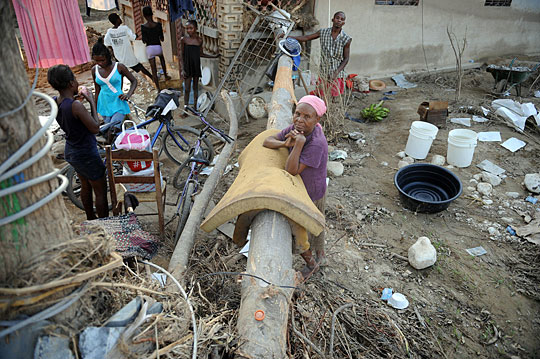 More On The Storms

Hundreds of thousands of people across Haiti have been affected by powerful hurricanes and tropical storms that have hit the country in recent weeks.

Crops were destroyed, and the infrastructure — in what was already the hemisphere's least developed nation — was crushed.

'It's Not About Bad Luck'

Dimanche Shwasnel, one of the 45 orphans at Timkatec orphanage in the Pationville neighborhood of Port-au-Prince, wants to build houses when he grows up. This might be because the 15 year old doesn't have one himself.

Shwasnel's father was a farmer in the south of Haiti.

"Animals ate our crops," Shwasnel says, "and the neighbors put a voodoo spell on our land, so our crops failed. My father didn't have family there anymore. Our farm wasn't doing well, so we came here."

But Shwasnel's father couldn't find work in Port-au-Prince and couldn't afford to feed his son. In 2004, he sent his son to Timkatec orphanage.

Shwasnel is just one teenager in a nation of almost 10 million people, but his life is already defined by the pressing troubles of a troubled nation — failing agriculture, massive unemployment, skyrocketing food prices and misfortune.

Father Joseph Simon, who runs the orphanage, says the problems plaguing Haiti, including the recent hurricanes, have nothing to do with luck.

"It's not about bad luck," Simon says. "If we worked on prevention, and if we used the money we've been given, well, we would not be in this situation."

The situation, in Simon's view, is dire. His orphanage is completely full — the 45 boys sleep packed into bunks in two rooms, and he says there are more children living on the streets than ever before.

Even as many Haitians were already struggling to get enough to eat, the price of staple foods such as rice, beans and cooking oil rose dramatically over the last year. And that was before the hurricanes.

Simon says the problem in Haiti is poor governance.

"We are sad to see the people who govern the country," Simon says. "They don't have any idea to go to work better to give a better life to the people in Haiti."

The governments change so rapidly that little gets accomplished. Over the last two decades, there have been 15 different administrations in Port-au-Prince.

Haiti is less than an hour-and-a-half flight from Miami, but the country ranks among the poorest and least developed in the world. According to the United Nations, almost half the population lacks access to clean water.

A small elite controls most of the country's wealth, and the average Haitian survives on less than $2 per day.

In April, riots over rising food prices toppled the prime minister. After these most recent storms, hundreds of thousands of people are now dependent on international food aid.

Evel Fanfan, who runs a human rights group in Haiti, says the recent food crises haven't been about food. Food is available, he says, it's just that ordinary Haitians can't afford it.

Fanfan says people in Haiti desperately need food assistance from the international aid agencies, but he says that's just a Band-Aid. Fanfan says there needs to be a radical change in his country, so that people can move beyond lives that teeter on the edge of disaster.