Accessibility links
Bikini Baristas Try To Get Leg Up In Seattle Baristas in spike heels, lingerie and other sexy attire are attracting long lines and large tips in Washington state. But some residents argue that coffee shops should be "PG" locales. The community is drawing the line at pasties, which have inspired some frothy rage and a push for a statewide law.

Listen
Bikini Baristas Try To Get Leg Up In Seattle 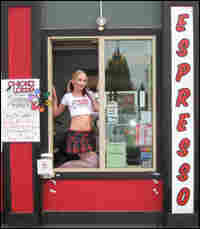 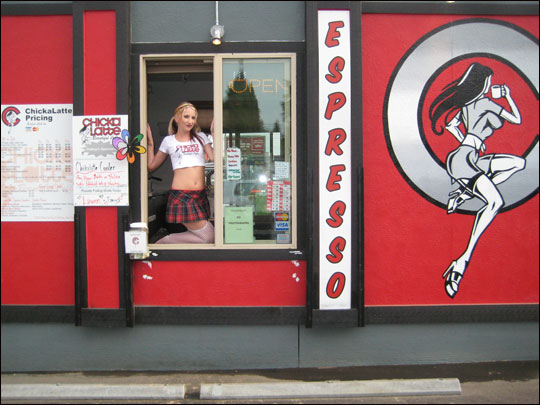 Lauren Alison is a barista at Chicka Latte in Seattle.

What do you think of the Seattle bikini baristas' tactics? Should there be rules to regulate these coffee shops? Comment on our blog. There, you can also read about a city that was full of scantily clad espresso-servers long before Seattle. 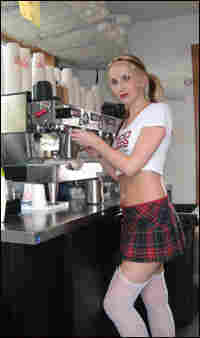 "It's not supposed to be skanky, or trashy or anything terrible," says barista Lauren Alison. "It's just supposed to be fun, and we all enjoy it." Sara Lerner/NPR hide caption

In the Seattle area, espresso huts are about as numerous as mile markers. Some coffee shops are trying to get a leg up on the competition by taking the sexy route — and numbers-wise, it seems to working.

When servers started wearing pasties at a shop called Espresso Gone Wild west of Seattle, however, some residents decided the caffeinated provocateurs had taken it too far.

Mason County Commissioner Tim Sheldon agreed that their attire violated zoning ordinances. Exposing "any portion of the female breast below the top of the areola" qualifies one as "unclothed," so "a pastie would not be acceptable," he concluded.

But Postier wants to take the issue further. She is pushing for a statewide law that would bar anyone under 18 from doing business at the stands where baristas wear pasties. She also wants a warning sign outside all sexy espresso stands, so "no moms with little kids will come through."

The coffee shops are reluctant to make changes, because the sexy formula is working.

"We stimulate the sexual imagination to drive our coffee sales. And it's proven to be a successful combination," says Steve McDaniel, who owns Java Girls, a chain of 16 espresso stands throughout the Seattle area. "It allows me to compete in a highly competitive marketplace and support my family and put food on the table."

A former casino manager, he says he's owned other coffee shops before, but couldn't compete.

"Sex has sold since the beginning of time. It's gonna continue to sell until the end of time," he says. And he's banking on this being true all over the world; he recently copyrighted Java Girls in nearly 30 countries.

The women who work for him are benefiting financially, too, he says.

"They make so much money at Java Girls, there's nowhere else they can go and work," he says.

Lauren Alison, who works at Chicka Latte, a similar sort of enterprise, says she understands that her business isn't for everyone. But if people don't approve, they should simply stay away. On this particular afternoon, she's dressed in a sexy school girl uniform — garter belt, tiny plaid skirt, fish net stockings and a crop-top.