Accessibility links
History's Advice During A Panic? Don't Panic With the collapse of Lehman Brothers, the sale of Merrill Lynch and the bailout of insurance giant AIG, long-standing financial fortresses of America are imperiled and the stock market is like a Six Flags roller coaster. In the midst of such upheaval, history offers a few lessons. 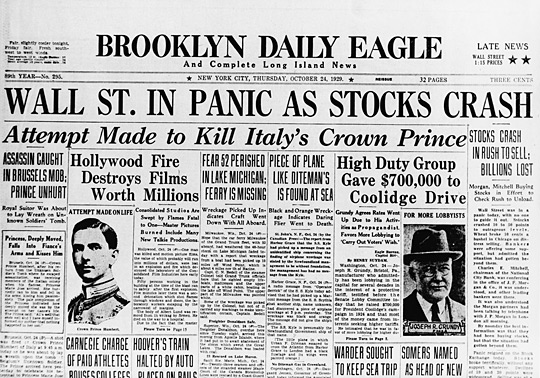 A newspaper front page announces the massive fall in stock value on "Black Thursday," Oct. 24, 1929. Robert S. McElvaine, a professor at Millsaps College, says he sees parallels now with events before that collapse. 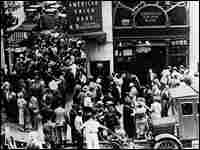 A crowd of depositors gathers outside the American Union Bank in New York after it collapsed in June 1931. FPG/Hulton Archive/Getty Images hide caption 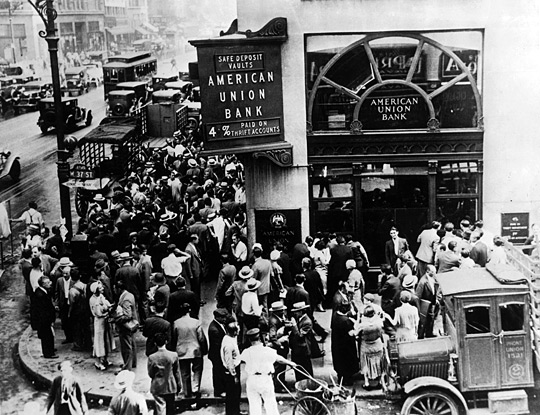 A crowd of depositors gathers outside the American Union Bank in New York after it collapsed in June 1931. 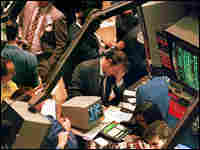 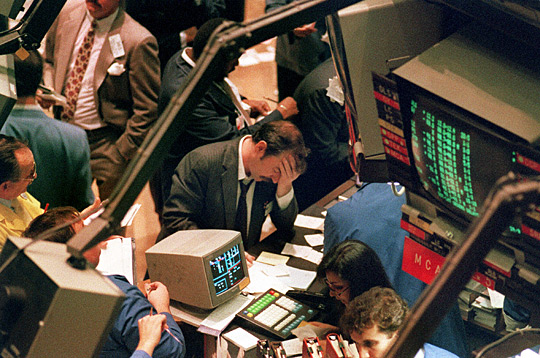 With the collapse of Lehman Brothers, the sale of Merrill Lynch and the bailout of insurance giant AIG, long-standing financial fortresses of America are imperiled and the stock market is like a Six Flags roller coaster.

In the midst of such upheaval, are there lessons to be learned from history?

To hear some economists and historians tell it, the lessons come in layers. There should be more regulation at the top, less selfishness at every level — and, for all involved, a cooler, philosophical response to the vagaries of the market.

"This financial crisis is a serious one, the most serious since the 1930s," says Richard Sylla, who teaches the history of financial institutions and markets at New York University. "But in many respects it fits the typical pattern of financial crises going back three or four centuries. Such crises seem disconcerting, even terrible to many people when they are going on, but they do come to an end and life goes on as before."

The adjustments will take time, and "more financial institutions may fail" along the way, he says. "But this has happened before, many times in history. And it will happen again, after the memory of this crisis fades. As The Economist said recently, 'Capitalism without failure is like Christianity without hell.' "

To cope with the widespread concern, greater governmental restrictions are very likely on their way.

"Government regulators will come up with new forms and methods for regulating the financial sector," Sylla says.

State University of New York professor Michael Zweig is adamant about Washington's involvement. A financial crisis like this "tells us that we need to regulate the markets," says Zweig, who teaches economics at the Stony Brook campus and is director of the university's Center for Study of Working Class Life. "We can't just say, 'Everybody for himself and the devil take the hindmost.' That leads to disaster."

To get the financial train back on track, he says, the government must put new restraints and limitations on what corporations and their executives can do.

Other market watchers agree, to varying degrees. Both presidential candidates, John McCain and Barack Obama, have said that there should be more government oversight of Wall Street's activities.

In The Same Boat

From its earliest years, the U.S. has been through economic depressions and recessions. The Panic of 1819, widely recognized as the country's first major financial maelstrom, caused bank failures, property foreclosures and flagging agricultural and manufacturing sectors. There were other crashes over time, often followed by increased regulations.

This time around there will be similar after-tremors across the financial landscape, historians say.

"Bankers and investors will be more cautious than they have been," Sylla says. "They were shellshocked during the 1930s, and some of them are getting that way now." But, he adds, "I don't perceive the crisis as having all that much impact on ordinary Americans."

Still, there is a lot of ominous talk about nest eggs, pension funds and home values.

A cataclysmic event "does change people emotionally," says Amity Shlaes, author of The Forgotten Man: A New History of the Great Depression. But often what happens after a downturn is "a positive sense of togetherness."

That common sense of purpose helped pull the country out of the Great Depression, caused by the stock market crash of 1929, says Robert S. McElvaine, a professor of history at Millsaps College in Jackson, Miss. He's also the editor-in-chief of the two-volume Encyclopedia of the Great Depression and author of several books on what followed the 1929 financial fiasco.

The jury is still out on where the current downslide will fall on the recession-depression continuum. But McElvaine sees similarities. "I have thought for the past couple of years that things looked like they did in the late 1920s," he says. "There was a serious housing crisis in the mid-1920s, particularly focused on Florida, but it spread out to other states. That bubble popped in 1926 and was replaced by a bull market on Wall Street."

There are other parallels, too, with the crash of nearly 80 years ago. Because of huge tax cuts by Calvin Coolidge, there was a concentration of income among a very small fraction of the wealthiest people. That concentration, he adds, "is around the same level it was in 1929."

The odd reaction, McElvaine says, is that after the New Deal was implemented, Americans believed they were all in the same boat. "People started cooperating more when they had less. There was more of an emphasis on community. Popular culture reflected that."

He points to novels such as The Grapes of Wrath and films like Mr. Smith Goes to Washington.

Financial historian John Steele Gordon takes the long view. We are not seeing a crash, he says, just some bad days. Crashes are characterized by record-breaking volume trading on the stock market, not by major dips in the average. On Oct. 29, 1929, volume was 16,000,000 shares — a record that was not broken for nearly 40 years, in 1968, he says. On Black Monday in 1987, he says, the volume was three times higher than the previous record volume.

History teaches us to remain calm, Gordon says. "Speculators can be badly burned" by dramatic up-and-down days, he says. "But investors — those in the market for the long term — won't be if they hang tight."