Accessibility links
Learning To Thrive With Attention Deficit Disorder Emily Algire earned good grades in elementary school. But by middle school, there were signs that something was wrong. Emily was diagnosed with attention deficit disorder. After being coached with specific learning strategies, she is now entering her second year of college with an upbeat attitude and good grades.

Emily Algire studies in her dorm room at Pacific Lutheran University. She was diagnosed with ADD in ninth grade, and with the help of coaching, is doing well her sophomore year at college. Michael Hanson/Aurora Photos for NPR hide caption 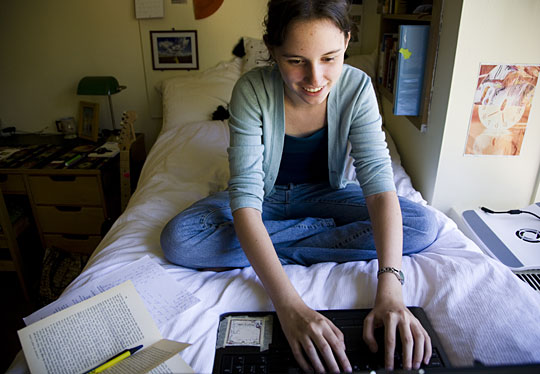 Emily Algire studies in her dorm room at Pacific Lutheran University. She was diagnosed with ADD in ninth grade, and with the help of coaching, is doing well her sophomore year at college. 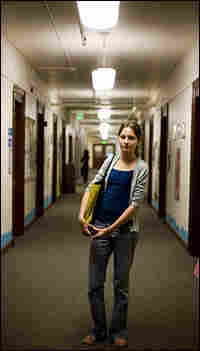 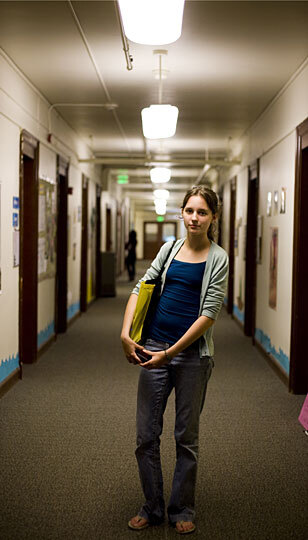 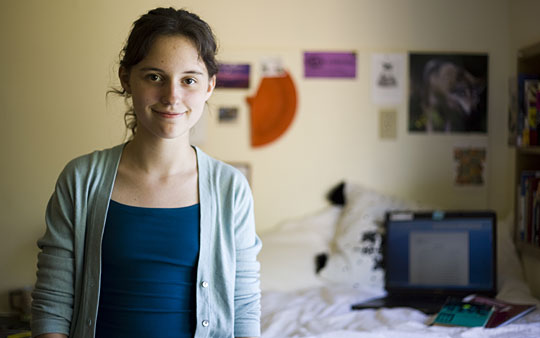 Emily Algire, a sophomore at Pacific Lutheran University, in her dorm room.

Lots of us find ourselves a little scattered at moments. Who hasn't spaced out during a meeting? Or BlackBerryed their way through a conference call, only to find out later that they missed the one important point?

For Emily Algire, 19, distraction is not just the result of too much technology in her life. She was diagnosed with attention deficit disorder (ADD) in high school. She recalls "earth-to-Emily" moments, when she'd be staring out the window during class and a teacher would call on her.

"Do you understand, Emily?" she recalls her teacher asking. "Yes, yes, a little bit," she'd respond.

Emily didn't act out or cause problems. She was shy and creative. And early on, she made very good grades. But by middle school, there were clear signs.

Emily's mother, Betty Overby, says the first sign she remembers was when Emily was in the sixth grade. "She wrote two beautiful book reports and didn't turn them in. They were in her backpack." Overby says that's when Emily got her first D.

The same thing happened in French class. Emily seemed to be learning the language, even enjoying it. But she didn't complete assignments.

Overby says Emily's behavior was such a mystery to her own detail-oriented mind. She had a bright child, she says, who just couldn't keep it together academically.

Early on, school counselors dismissed the idea that Emily needed special assistance. Medicine did help her improve her grades, but she stopped taking it because she felt nauseated and lost weight.

Finding Help With A Coach

Emily needed to find a different way to solve her problems. Her family eventually got help from a group of psychologists who specialize in attention deficit coaching.

"I am a believer in doing absolutely everything you can to get your brain to function properly," says Kathleen Nadeau, a clinical psychologist. "We are very reactive to the environment, so we need to be careful of the environment we put ourselves in."

Take homework, for example: Organizing is everything. Clinical psychologist Kara Goobic explains that you can't just preach about the importance of organization — you have to show kids how to do it.

"With Emily, what I worked on a lot was planning for homework assignments," Goobic says. She taught Emily how to handle a syllabus by putting deadlines for papers on her calendar, and by helping her break big projects down into smaller chunks.

Lots of study skills may seem simple and intuitive to people who don't have ADD, says Goobic. For example, having a binder for each subject and clearing your desk of clutter is "just a natural tendency that most of us have. But for someone with ADD, it may not be an automatic thought," she says.

The freedom of campus life is incredibly appealing to most college-aged students. But without the support of home, it can turn out to be pretty stressful. And stress intensifies the decision-making problems that many children with ADD have.

"The more stressed and anxious we are, the more we are thinking with our emotional brain instead of our rational brain," Nadeau says.

To pre-empt the stress, Nadeau says, she helps her college-bound students come up with plans for exercise, eating well and setting a realistic class schedule.

For instance, Nadeau advises students not to sign up for classes that start before 11am. That's a lot more practical, says Nadeau, than trying to convince college kids to go to sleep earlier in the evening. "That's not going to happen!" Nadeau says students should use the flexibility to craft a schedule that's going to help them succeed.

Emily is trying to follow all of the advice she's been given. In her freshman year, for example, she had another student take notes for her so she could pay attention in class.

"Then I realized later it was so much easier to take the notes," she says. It helped her pay attention.

Emily's mom says she's proud of her daughter for finding her own way. Emily has now begun her sophomore year at Pacific Lutheran University, and she wrapped up her freshman year with a 3.4 grade point average.

"I think she's got very good self-awareness" says Overby. And all the tools she's been taught for coping with her ADD are helping her feel strong.