Accessibility links
Female Voters Speak Out On Palin Republican vice presidential nominee Sarah Palin has re-energized her party's ticket. The GOP is also hoping the Alaska governor will attract the all-important female vote, especially in battleground states like Missouri. A group of women in the Show Me state explain how they feel about Palin.

Republican vice presidential nominee Sarah Palin has re-energized her party's ticket. The GOP is also hoping the Alaska governor will attract the all-important female vote, especially in battleground states like Missouri. A group of women in the Show Me state explain how they feel about Palin.

And I'm Renee Montagne. We're going to spend this part of the program talking about the vice presidential candidates. And we'll start with Democrat Joe Biden. He's attracted a lot less attention than his Republican counterpart, Sarah Palin. But Biden has been on the stump almost constantly. This week, he was in the hard-fought Upper Midwest, Michigan and Ohio, focusing on the economy and attacking Republican presidential nominee John McCain. In short, Biden has been doing exactly what candidates for vice president have always done. NPR's Don Gonyea is traveling with him.

DON GONYEA: I'm on the road this week with Joe Biden. It all feels kind of timeless.

Unidentified Bandleader: One and two and set and go.

GONYEA: It could be almost any high school marching band in any small town. In this case, it's Maumee, Ohio, and the band is wearing the purple and gold of the Panthers of Maumee High. A big topic this week is the economy and the turmoil on Wall Street. Predictably, Biden aimed some of the blame at John McCain, noting that the Republican presidential candidate began one day this week calling the fundamentals of the economy strong.

JOE BIDEN: Two hours later - literally, I'm not making this up - at 11 o'clock, as we Catholics say, John had an epiphany.

Senator Biden: At 11 o'clock, John McCain said that this is - we're in great economic crisis. Well, ladies and gentleman, this boy had what they call a political epiphany, not a policy epiphany.

GONYEA: The not-so-subtle references to Catholicism are a not-so-subtle reminder of something Biden shares with many voters here in the industrial part of Northern Ohio. Catholics are a key demographic here in this state and in neighboring Michigan and Pennsylvania. And Biden's speech in Maumee was peppered with such references. Moments after the epiphany line, Biden talked about John McCain's frequent praise of Bush administration economic policies.

BIDEN: As, again, we say, bless me father for I have sinned. Give me a break. We have made - seriously, that's his comment - we have made great economic progress during the Bush years.

GONYEA: If you're wondering when you'll get a reference to Biden's sainted Catholic mother, it came later in the day in Wooster. But back in Maumee, near the end of his speech Biden tossed in yet another biblical reference. This time it was on McCain's promise to crack down on greed on Wall Street.

BIDEN: So let's take a look at John's conversion here. Something happened on the road to Damascus.

BIDEN: John fell off his horse, but he got back up on the same horse.

GONYEA: Joe Biden's road show is not nearly as extensive as that of Republican Sarah Palin. There's none of the celebrity buzz that is so evident at her rallies. But Biden is drawing crowds of committed Democrats, including lots of union members who have long seen Joe Biden as a friend. Al Silac(ph) has been a member of the Electrical Workers Union for three decades.

AL SILAC: Joe has been around for a long time. It's not a flashy pick, but like I say, he's supported labor, so. He tells things like they are, and that's what people need to be told, the facts.

GONYEA: Last night, Biden drew several thousand in Wooster, Ohio. Most of his rallies draw only hundreds, but they tend to be a specific kind of voter. Lots of labor guys, often Catholics. They're constituencies Barack Obama had trouble with during his primary fight with Hillary Clinton. If they are ambivalent, it could mean real trouble in a state like Ohio, the state everyone agrees made the difference in 2004 and may well again in 2008. Today Biden continues his bus tour with stops in Canton and then in Youngstown. Don Gonyea, NPR News, in Maumee, Ohio. 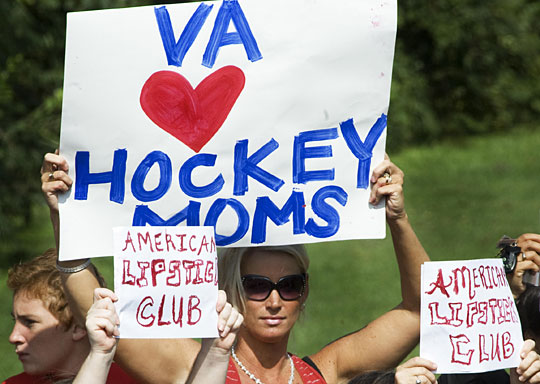 A woman in the crowd holds a sign as Republican presidential nominee John McCain and his running mate, Sarah Palin, campaign in Fairfax, Va., on Sept. 10. 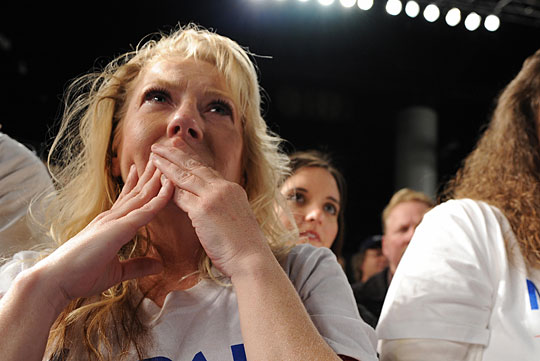 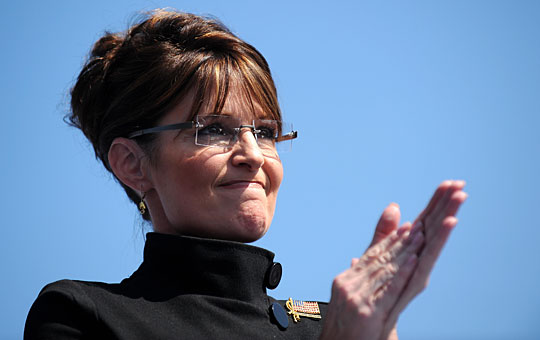 A girl and some women watch from a window as Republican presidential candidate John McCain and his running mate Sarah Palin greet the crowds at a campaign event in Lebanon, Ohio, on Sept. 9. Robyn Beck/AFP/Getty Images hide caption 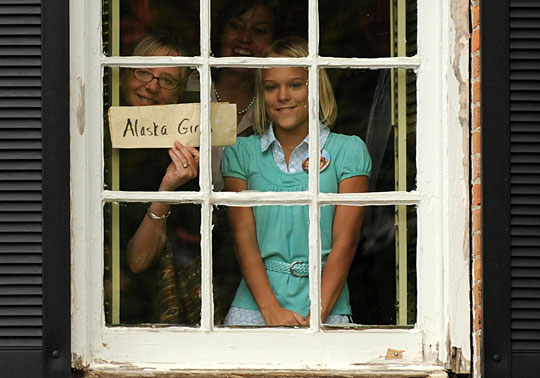 A girl and some women watch from a window as Republican presidential candidate John McCain and his running mate Sarah Palin greet the crowds at a campaign event in Lebanon, Ohio, on Sept. 9.

Sarah Palin's dramatic effect on political attitudes is not limited to Alaska. She's given the whole country — and, in this case, female voters — a new way to think about the presidential election and women's place in it.

On a recent visit to the swing state of Virginia, female voters expressed both admiration and concern about Palin as a possible vice president. While some women said they admired her fresh approach, political ascent and ability to juggle her work and her family, others said they were worried about her level of experience and her ability to function as president if anything happened to Sen. John McCain.

"People are saying it's a maverick thing, but I think it's a risky thing," one young mother named Stephanie Elms said about McCain's selection of Palin. "The idea that he could pull something like that in foreign policy really, really worries me."

NPR spoke with three groups of women in Prince William County: middle-aged women who take riding lessons; members of a mystery book club; and a group of young mothers, most of whom home-school their children.

One of the young mothers, Heather Melugin, originally jumped on the Palin bandwagon. Melugin, like Palin, has a special needs child and has been a working mom.

"So I was really excited about this until I saw her interview with Charlie Gibson," she said.

Palin was interviewed on ABC News last week. During the interview, Gibson asked Palin how she weighed the offer to be McCain's running mate. In response, Palin said that she accepted it instantly. It worried Melugin that Palin did not first consult her family.

But other female voters found that kind of candor refreshing. Undecided voter Peggy Smith is a riding instructor from Manassas.

"I think it's more that she doesn't come across so much as a lifetime, professional politician — that she started truly at a place where any woman could go out and start," she said.

And other women, like registered nurse Kay Finney, said that Palin's entry into politics should give women confidence.

"I like that she was in your face, and I like that she was straightforward. She says, 'I've been a mayor of a small town, and I've been the governor of Alaska, and that's it.' I think she's a breath of fresh air, and I'm excited that she's on the ticket," she said.

But all of the women agreed that as the economy worsens in the United States, the choice of vice presidential candidates seems less important.