Accessibility links
Wyclef Jean Describes Haiti's Devastation Musician and singer Wyclef Jean returned to his native Haiti to see first hand the damage that three hurricanes have done to the country in less than a month. Wyclef describes the devastation he saw, his philanthropic foundation and how the international community can help address Haiti's growing need.

Musician and singer Wyclef Jean returned to his native Haiti to see first hand the damage that three hurricanes have done to the country in less than a month. Wyclef describes the devastation he saw, his philanthropic foundation and how the international community can help address Haiti's growing need. 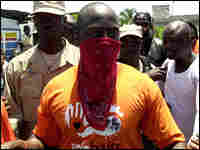 Wycleff Jean is welcomed by supporters on June 19, 2008 in Port au Prince, during launch of a fundraising mission to bring food aid to Haiti. Getty Images hide caption

I'm Michel Martin and this Tell Me More from NPR News. It's time for our international briefing, which we try to bring you every Thursday. We'll tell you about a fight between an American oil company and environmental activists in Ecuador. It's one of the longest and most complicated environmental disputes on the record, and we'll tell you about it in just a few minutes. And later, as part of our celebration of Latino Heritage Month, we talk with world music sensation, Lila Downs.

But first, we go to Haiti. As millions of Americans are struggling to recover from Hurricanes Gustav and Ike, it's important to remember that Haiti has been hit by three hurricanes and a tropical storm in less than a month. Hundreds had been killed and thousands have been forced from their homes. Grammy-winning artist and Goodwill ambassador Wyclef Jean visited Haiti last week to assess the damage and help with the relief effort, and he joins us now. Welcome to the program. Thank you for speaking with us.

MARTIN: First of all, can you tell us about your trip? Where did you go? And what did you see?

Mr. JEAN: When me and Matt Damon - we was doing in this (unintelligible) one by one and we was looking at what was going on in the States and the way that Ike was coming in, and we saw that there really wasn't enough awareness on what was going on in Haiti. So we figured if we got on the ground that we would be able to make a blitz(ph). And the way that I could describe the scene to you is basically in the middle of night the storm came, washed away their houses, mothers lost their children to the point where they lost count. I'm talking about like little kids. Some were four, some were six, some were eight. This was in Cavaellon. Then the next day we went in Gonaives, and the best way to describe it is, you know, Katrina times a million. Basically, the whole entire city is under water. People are living from the top of their roofs. They have a total of 12 days they have not eaten. The whole city smells like dead bodies. The water is filled with mucous, dead cats, remains of dead bodies, and kids are just walking barefooted in this water. So can you imagine we're going to need like clinics to treat these people because you can imagine the diseases that's going to come from this water.

MARTIN: Did you see any visible relief effort while you were there? Are there any water stations, foods stations? How are people surviving?

Mr. JEAN: So the workers are scared. They don't want to put their lives at risk. So a lot of the distribution it's going very slow. The only way to get to Gonaives is by air or by sea.

Mr. JEAN: Well, there are two things that's urgently needed. The international community in the U.S. - one of the things we've seen is the way that the city is flooded is there is some form of machinery, some form of equipment that they could bring in, similar to like FEMA, to help get a lot of the water out of the town and back into the river. That's the biggest thing which is needed.

As far as what we're doing, we have a Web site called yele.org, Y-E-L-E dot org. And from what we've seen, if everyone gives five dollars, five dollars can actually save a life. And what we mean by that is what's needed urgently is food, clean water. They need blankets, which are very important. They need medicine, and these are like the immediate needs of the people, right away.

MARTIN: Is it a little painful for you, though, to see so much suffering and to feel that it's not getting the attention that it deserves?

Mr. JEAN: I mean, it's definitely painful, and what I explain to people is from Miami, Haiti is an hour and 40 minutes. And if we can help these people get the country back and we get it stable, then you're not going to have to worry about people trying to come over on your shores.

MARTIN: All right. Grammy Award-winning musician, Wyclef Jean. He recently came back from a trip to Haiti where he assessed the hurricane damage there. Well, keep us posted, if you will. We appreciate your speaking with us today and thank you for your work.

Mr. JEAN: Thank you so much.