Accessibility links
'Appaloosa': Fun With The Guys, Until A Filly Arrives With two laconic, unflappable heroes and a nicely psycho villain, Ed Harris' new Western does a lot right. The bit with the pretty young widow, unfortunately, isn't one of them.

Listen
'Appaloosa': Fun With The Guys, Until A Filly Arrives 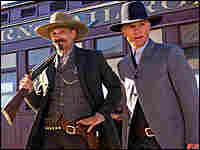 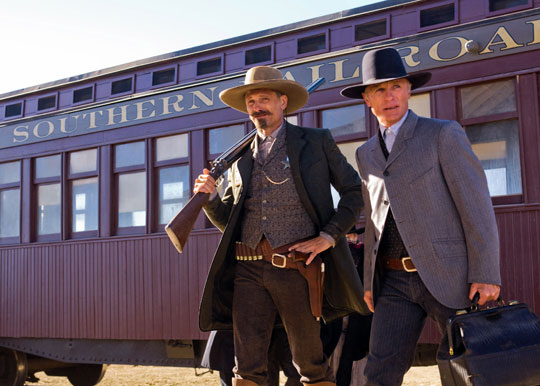 Rated R for violence and language.

'We Want Our Town Back' 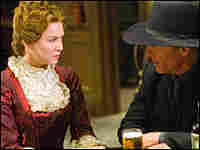 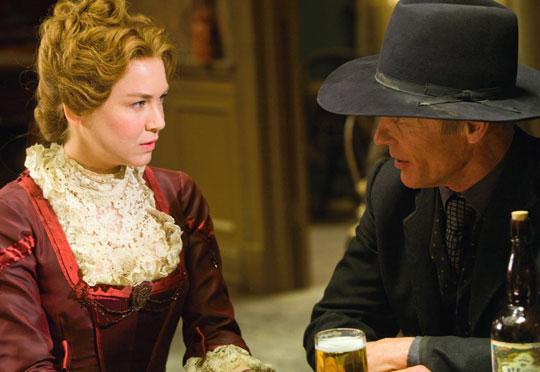 ... until the Widow French (Renée Zellweger) comes to town.

Few movie sounds are more appealing than pounding hoofbeats heard before the opening credits: A Western is about to start, and if everything goes right, nothing can be better than that.

Appaloosa, the latest film to begin with that stirring sound, has done a lot of things right — but not everything. It respects Western-movie tradition, and in co-stars Ed Harris and Viggo Mortensen, it has two actors who play the kind of tough, laconic, unflappable men Westerns couldn't exist without.

The two men are partners in a tidy lawmen-for-hire operation: If your town is a mess, you hand absolute power over to these gentlemen and, for a fee, they clean it up for you and move on. As one of them puts it, "I don't kill people for a living. I enforce the law. Killing is sometimes a byproduct."

In the New Mexico town of Appaloosa, the team runs up against the inevitable psychotic rancher, played this time by Jeremy Irons.

As in many a Western, the real love match in Appaloosa is the one between the two lawmen. So it's unfortunate all around that the train rolls into Appaloosa one day, bringing with it a young widow (Renee Zellweger) who's arrived with an extensive wardrobe, some piano-playing skills and little else.

Given the marked lack of piano-playing women with extensive wardrobes in Appaloosa, the two lawmen both find themselves smitten with the newcomer — something they live to regret.

Because she has a simpering manner that offers all the charm and seductiveness of a potato casserole, Zellweger's widow is unconvincing as the object of multiple attractions. She's so irritating, in fact, that it's difficult to focus on the rest of the film.

And all the pounding hoofbeats in the world can't make up for that.