Accessibility links
U.S. Finances Precariously Perched On A 'High Wire' American families are nervous about the stability of their finances — and Peter Gosselin says that they should be. In his new book, High Wire, he writes that an increasing number of families are only one mortgage, doctor, or emergency payment away from financial ruin.

Do you feel like you are walking a financial tightrope? 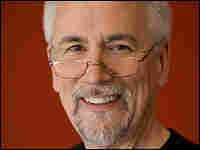 Peter Gosselin says that Americans have fewer financial safety nets than they used to, and are living in financially risky times. Scott Robinson hide caption

American families are nervous about the stability of their finances — and Peter Gosselin says that they should be. In his new book, High Wire, he writes that an increasing number of families are only one mortgage-, doctor-, or emergency- payment away from financial ruin.

Gosselin is a national economics correspondent for the Los Angeles Times and the author of High Wire: The Precarious Financial Lives of American Families. 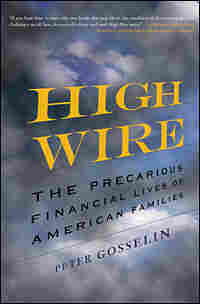 This is a book about earning a living, affording a family, and making it through a work life in America today, and it begins with two seemingly irreconcilable facts.

The first is that for most of the past quarter century, the United States has enjoyed the return of a resilient and growing prosperity that once seemed lost. The economy has doubled in size. The gross domestic product, the broadest measure of annual output, has climbed from just over $7 trillion to almost $14 trillion.

Employment has remained high, inflation low. And unlike the prosperity immediately following World War II, which seemed largely the product of the United States being the last nation standing after the conflict, and which, in any case, unexpectedly began to falter after 1970, the recent growth has been no onetime windfall. Instead, it seems to have sprung from a new enthusiasm for technology, a wide-ranging policy decision to get out of the way of free markets, and a willingness on the part of many Americans to plunge into the global economy with an optimism unmatched by most of our overseas competitors.

The second fact is that many of us, even the affluent among us—those with family incomes running into the hundreds of thousands of dollars—have arrived at the new century increasingly uneasy, with a gnawing sense that our circumstances are changing in ways that leave us less secure. This apprehension has little to do with terrorism or nuclear proliferation or even the Iraq war, much as these issues matter to people. It has not emerged from worry over religious or moral values, or the erosion of constitutional freedoms, or political ideology. Indeed, it has not been public events that sometimes awaken us and leave us tossing in bed. Instead, fleetingly, but recurrently, we have been night-stalked by questions about our private lives: What will happen to my job? Can I pay the doctor? How will I cope if I can't work or my spouse can't? Could I replace my house if it caught fire or was hit by a flood? How will I pay for my children's education? Will my kids do as well as I have done? And behind these questions is a broader concern that, for all of the recent economic growth, the rules by which the world now runs are no longer moving with us, but against us.

Is this a case of needless anxiety in an age of rapid, but generally positive, change? Faced with too much new technology, new competition, new immigration, new social mores—too much "new" in our lives—are we hyperventilating on a continental scale? Do we simply need to get a grip? Or could it be, is it just possible, that millions of Americans have glimpsed an uncomfortable new reality—that the progress of the overall economy is being purchased at a price of diminished security for our families and ourselves? Could it be that the world of work no longer offers the old promise of material progress and security in exchange for diligence and prudent living? At a time when any serious injury or illness may bring ruinous medical bills, can we still count on full protection from those health insurance policies that cost us more each year? Have unrecognized loopholes crept into our homeowners insurance? Does more education really shield us from the inroads of global competition, as our leaders tell us? Most of all, in terms of our personal lives, does America still mean what we always thought it meant?

To begin to understand this paradox—how the United States as a whole could have grown richer while individuals and families have become financially less secure—and to begin to see whether the American promise endures, it is useful to look to the past, in this case to the distant past, New England in 1620. In that year, as the small sailing ship the Mayflower rode at anchor off the coast of Cape Cod, William Bradford and his fellow Pilgrims faced a crisis: Winter was coming on. Blown off course by storms, they would have to settle far north of their intended destination. And they faced the unexpected prospect of mutiny. Although most of us think of the Mayflower colonists as a tight-knit band of religious dissenters, in fact many on the ship did not share the Pilgrims' religious views; they had been recruited only to help finance the voyage. Now, some of these "Strangers," as the Pilgrims called them, muttered about going their own way, threatening a potentially fatal schism. So Bradford called a meeting. The result was the Mayflower Compact, a terse but unequivocal agreement to "combine ourselves together into a civil body politic" that would create such laws and regulations "as shall be thought most meet and convenient for the general good of the Colony, unto which we promise all due submission and obedience." Forty-one of fifty men on board signed on behalf of themselves, their wives, and their children.

The colonists who founded Plymouth Plantation were in the New World for all sorts of reasons—some to pursue religious beliefs, others to seek fortune, still others to enhance what fortunes they already had. And they were a people not much given to compromise. Yet under the pressure of brutal necessity—as many as half would die within a year—they agreed to yield some part of their individual autonomy to the group. More important, they agreed to a certain mutual responsibility for the well-being of one another, even if meeting that responsibility might sometimes clash with their private interests.

This implicit bargain lay at the heart of virtually everything that followed. The Revolution, the Constitution, the rise of a huge and diverse nation, all rested upon a common understanding: The new society would be dedicated to individual, not collective, dreams, but everyone would nevertheless accept some responsibility for each other and for the common good.

Strangely, however, over the past twenty-five years or so, the bargain struck aboard the Mayflower and extended forward through almost four hundred years of often turbulent history has begun to unravel. The basic social contract on which American society has always rested—no matter how imperfectly—has begun to change. The inherent balancing of competing interests that lay at the heart of the bargain has been upset. And it is something about this change that stirs the uneasiness so many Americans feel in their private lives.

As we shall see in the coming chapters, the specific elements of the change have come with surprisingly little public attention. What noisy political debates there have been—for instance, over welfare reform and Social Security—have involved comparatively small numbers of people or have ended in draws that have left the status quo intact. In fact, the main business of change has occurred not in the glare of the public arena but in the relative obscurity of the private sector. But there, the results have been remarkable. The old idea that, even as we pursue our personal destinies, we owe an obligation to each other, to a "civil body politic," and to a "general good," has been shunted aside. In its place, wrapped in the economic doctrine of free markets and the moral precept of personal responsibility, stands a new first principle: Each of us is now expected to forge our own future, free to rise or fall as our talents and luck may dictate. And we are expected to do so with little or no assurance that if, through hard work, we succeed, we can hang on to what we have achieved. At the heart of this credo is the belief that free markets can solve problems— even social problems—better than government or, for that matter, almost any other institution. Whatever the challenge, the best approach is to get out of the way and let the market define the path to a solution. Indeed, it is argued, any attempt to do otherwise through "social engineering"—whether it be via a government guarantee of medical care or a business corporation's guarantee of pension benefits—will not only fail but make matters worse.

Instead of joining together to solve problems that affect the whole society, the heralds of the new approach say, more responsibility should be placed on individuals and families alone. Only when people themselves bear the consequences of financial reversal will they take the steps necessary to protect themselves. As we shall see, the logic of this last position has proved surprisingly appealing. It keeps cropping up in unlikely corners of the remade economy.

And as these new ideas have spread, they have sharply eroded the old idea that the bounty of America should be broadly shared and that those who worked hard and played by the rules should be able to count on some minimum level of protection against bad times and personal misfortune. Small wonder, then, that so many people have felt like they are living on a high wire without a net to soften a fall. 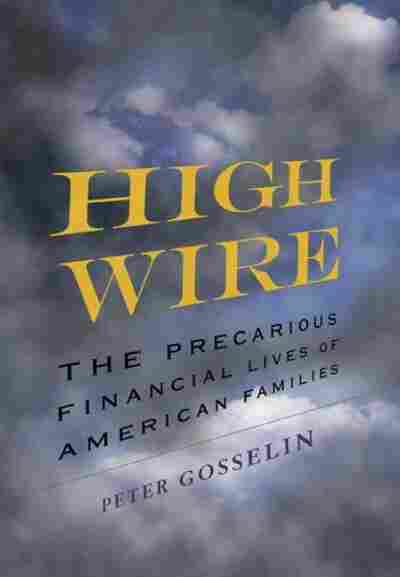