Accessibility links
Obama Courts Voters In Colorado's 'Red' Counties In its effort to win Colorado in November, the Obama campaign is courting voters even in the reddest parts of the state. While Democratic Party organizers don't expect Obama to carry these GOP strongholds, they hope a strong showing will be enough to put him over the top in the state. 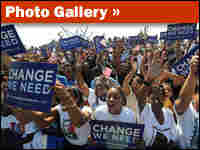 In its effort to win Colorado in November, the Obama campaign is trying to pick up Democratic voters wherever they can find them, even in the reddest parts of the state.

As a result, Colorado's rural Democrats are getting more attention than they have in many years. Barack Obama's visit to Grand Junction earlier this week was the first by a Democratic presidential candidate since Harry Truman in 1948.

Delta County in western Colorado has long been a Republican stronghold. Democratic organizers there meet in a 9-foot by 20-foot concrete building off Main Street in the city of Delta. When 75 people showed up for the headquarters' ribbon-cutting party, the organizers were overwhelmed.

"When I got home, I still had people calling to say, 'I just saw something I thought I'd never see in Delta: Democrats spilled out in the street.' It was great!" said Carol Phelps, another organizer.

What may seem like a modest turnout in many other places was considered a success in Delta, and those 75 people may be evidence that things are improving for Democrats in western Colorado. Gretchen Nikolaeff, a Democratic organizer who moved to the county in the early 1970s, said she remembers a time when her party was essentially defunct.

The old labor Democrats were lost when the coal mines went nonunion, as well as those members of the party who were attracted to Ronald Reagan. According to Nikolaeff, the pool of reliable volunteers and organizers shrank to a small handful of people.

Still, to say Democrats are doing better in Delta County is really to say they are doing less poorly than in the past. Republicans still dominate local races, and they outnumber Democrats by more than two to one here. But close to one-third of voters are unaffiliated. In 2006, when centrist Democrat John Salazar won a seat in Congress, he even squeaked by in Delta by a few hundred votes.

"Which means that not only did [Salazar] carry the unaffiliateds, he must have taken 20, 25 percent of the Republicans because otherwise, you know, he couldn't have won," Nikolaeff said.

In the same year, unaffiliated voters helped push Democrat Bill Ritter into the Colorado governor's office. Although Ritter did not win Delta County, his loss was limited to only 10 percentage points.

"But that was a victory to us because previously, we might have lost by 20 or 30 or, you know, more than that, even," Nikolaeff said.

That is the Democrats' strategy for this November in Delta County: to help Obama secure about 45 percent of the vote by attracting unaffiliated voters and moderate Republicans. Even if they are unable to win, they hope to minimize the margin of defeat.

"I would faint dead away if we actually carried Delta County for Obama," Nikolaeff said. "I would — I don't know. I might have to hang up my spurs, you know, because I don't think we could top that."