Accessibility links
Could Political Views Be Driven By Biology? It may be possible to predict people's political beliefs based on how strongly a person responds to alarming images and sounds, says a new study. People who had stronger reactions tended to favor things like military spending and the death penalty. But not everyone's onboard.

Listen
Could Political Views Be Driven By Biology? 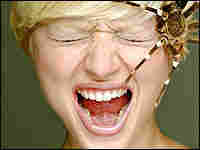 Researchers used images similar to this one to test how volunteers responded to threatening visuals and sounds. Getty Images hide caption

In a recent television interview, Republican vice presidential candidate Sarah Palin stressed that she did not blink when Sen. John McCain asked her to be his running mate. But a new study suggests that people with conservative views on certain political issues may be more likely to blink hard when startled.

John Hibbing, a researcher at the University of Nebraska-Lincoln, has been studying whether people's political beliefs might be linked to biological traits such as their startle reflex.

He says traditionally, political scientists have assumed that social influences are the main determinant of people's voting patterns.

"The dominant paradigm really is that it's all environmental," Hibbing says, "that it's what your parents pushed down your throat; it's moving in with a wild roommate in college; it's an influential clergyperson."

But he wanted to look at whether people's physiology might play a role. So he recently invited 46 middle-aged Nebraskans who hold strong political views to come into his lab.

The volunteers sat in front of a computer with sensors on their fingers, to measure skin moisture — that's a kind of stress test. They also had sensors under their eyes, to measure how hard they blinked. The researchers told them to watch as some images flashed on the computer screen.

"Some of these pictures are very soothing, like a sunset or a bunny rabbit," says Hibbing, "and others are quite threatening."

The threatening pictures included a dazed man covered with blood, an open wound with maggots, and a large spider crawling across someone's face.

The volunteers also wore headphones. At random, unexpected times, they would hear a blast of loud static.

Hibbing and his colleagues found that they could predict what a person's political beliefs would be based on how strongly the person's body responded to the alarming images and sounds, according to a report in the journal Science.

"Those people who seemed to have a stronger reaction to threat were more likely to favor things like military spending, the death penalty, the Patriot Act," says Hibbing.

He doesn't think this study means that conservatives are essentially scaredy-cats.

"I think it's just as easy to say that liberals are naive, and they don't get it. They don't understand it's a dangerous world," Hibbing says.

He says there is no "normal" response in this experiment.

"That's why I hope the upshot of this might be a little bit more tolerance for people on the opposite side," he says, since people might be more understanding if they knew their political opponents might simply be experiencing the world differently.

Other Scientists Weigh In

Other political scientists say it's an interesting finding but its meaning is unclear. Gabriel Lenz, a researcher at MIT, says, "I guess I'm not entirely convinced that this shows that it's biologically driven. It could be a biological response that's been socially generated," by people's upbringing, for example.

Evan Charney, a political scientist at Duke University who has been critical of past efforts to link people's political views to their genes, says this study may not be actually measuring people's biological response to a threat.

When you show people images of maggots or blood, he says, they may react not with fear but with disgust, or maybe even confusion. "None of those responses are necessarily threat responses," he says, so he thinks it's quite a leap to link them to issues like gun control.

Also, Charney says he would expect liberals to be threatened just as much as conservatives — just by different things.

"That's what differentiates their political ideologies," Charney says. "Not the degree to which they feel threatened, but the objects that are threats to them."

Christopher Buckley, a conservative writer whose political satires come from years of observing the political scene in Washington, D.C., says he's not surprised that people who startle easily might go for certain kinds of things like defense spending.

"They want, you know, more B-2 bombers," he jokes. "That seems to be a fairly logical deduction."

He says this study doesn't jibe with his own experiences.

This latest political election might not involve anything as shocking as photos of maggots, but Buckley says there's been plenty of twists and turns:

"There have been few moments that have not gotten my own personal blink-o-meter going."

Buckley doesn't think it's because he's particularly prone to blinking or startling; it's just the election itself.

"I think this one has been one for the startle books."