Accessibility links
'Great Outdoor Fight' Flows From Web To Page Chris Onstad's web-comic Achewood may be modeled on stuffed animals, but it's anything but cuddly. The new print compilation of the strip highlights The Great Outdoor Fight — featuring three days, three acres and 3,000 men. 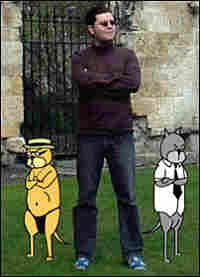 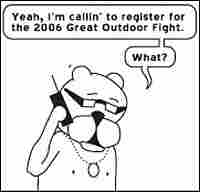 Check out a graphic excerpt. (Please note that some users might find the language of this excerpt inappropriate.)

"All the art is a loss leader."

'Achewood' on the big screen?

Chris Onstad was working at a Silicon Valley tech firm in the fall of 2001 when — inspired by sketches of his future wife's childhood stuffed animals — he decided to try out what he calls "the relatively unproven concept of making a living off of a web-comic."

The result was Achewood, a strip that depicts a stark, black-and-white version of California inhabited by not-so-cuddly cartoon animals who curse, use drugs and get into hilarious adventures involving a variety of obscene themes.

Since its debut, the strip has become a cult hit online and the Onstads have made it their family business — selling all kinds of merchandise on their Web site, including self-published compilations of the strips.

The story begins when Ray Smuckles, a happy-go-lucky playboy cat, learns that his long-lost father was the champion of the annual fight. Believing himself to be genetically endowed with the same athletic talents, Ray wheels and deals his way past the qualifying rounds into the main tournament — a violent affair that, Onstad tells Morning Edition's Steve Inskeep, features "a car chase and all the silly cliches you might imagine."

Elaborate as the titular fight may be, Onstad modestly calls the art in Achewood "minimalist." The true attraction to the strip is the richness of the dialogue — not just what the characters are saying, but also how their words appear visually. For instance, he suggests a low mumble for Roast Beef, the depressive, always down-on-his-luck cat, by writing his dialogue in a slightly smaller typeface and with less punctuation than the rest of his characters.

To further help his readers conjure up the world of Achewood, Onstad links from his Web site to several blogs "written by" his characters. He says the blogs free him of the constraints of the medium by allowing him to flesh out the characters in a way that's impossible in the the small space of a daily newspaper. Working on the web also frees Onstad from some of the deadlines of print.

"Since I work for myself I regularly blow deadlines left and right like I was going duck hunting," he says. "People just have to roll with it ... [but] I'm honored that they stick with it."

The disadvantage of publishing on the web is that there's no syndicate supporting Onstad's work. When he talks business, he calls the strip a "loss-leader," designed to attract fans to his merchandise and to subscription services that grant access to extra content.

Onstad hopes to see Achewood on the big screen someday, but though he'd like to branch out into other media, he doesn't see himself quitting the online comic strip business any time soon.

"I like the characters in this body of work," he says. "I've created a good vehicle for communicating with people, and I don't want to throw it away." 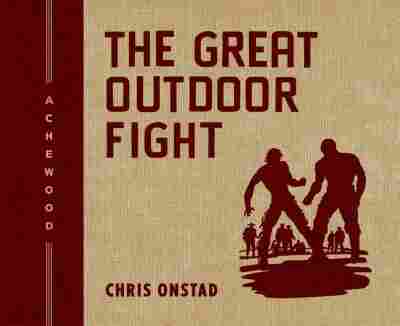