Accessibility links
3-D Movies May Be The Answer To Filling Theaters The movie business is betting on 3-D to keep people coming to theaters. It's going to be expensive to get the necessary digital equipment into the thousands of movie theaters across the country. So, Dreamworks Animation head Jeffrey Katzenberg is leading the charge to get studios to help pay the price.

Listen
3-D Movies May Be The Answer To Filling Theaters 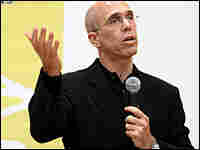 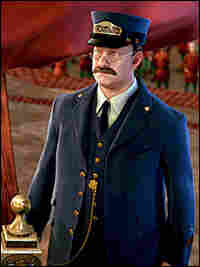 New world order: Blogger Daniel Smith hopes 3-D will be reserved for creating magical worlds, like the one in The Polar Express (pictured: Tom Hanks' conductor character). Smith says that movie was "much superior" in 3-D. Warner Bros. hide caption

You may have heard that this summer was a record-breaker in terms of box office. But that was thanks to higher ticket prices.

The number of movie watchers going to movie theaters, it turns out, has been been trending down for several years. The studios are looking for a game changer — and they're hoping they'll find it in 3-D movies.

Jeffrey Katzenberg runs DreamWorks Animation, the studio behind Shrek and Madagascar. But when he had his "Aha!" moment in 2004, he was watching The Polar Express, a Warner Bros. movie.

"I walked out of that theater and ... I said, 'Our lives are going to be forever changed,' " Katzenberg says. "Because this is the future for us."

And not just for DreamWorks Animation, he believes, but for movies generally. Katzenberg sees 3-D as the third great revolution in the history of film.

"The first is when movies went from silent films to talkies, and the second is when they went from black and white to color," he says. "And I believe what we are facing as an opportunity today is as great as either of those were."

He predicts that in "less than a handful of years," the great majority of films will be made and shown in 3-D.

Mike Campbell, whose Regal Entertainment Group operates North America's largest theater chain, agrees with Katzenberg that 3-D is a "needle mover." It's already attracting people to theaters that are equipped to show such films, and the audience is willing to pay a premium for tickets.

But Campbell doesn't quite share Katzenberg's conviction that 3-D will become the standard. The audience will need time to adjust to the experience, he argues.

"Whether they get to the point where everything is demanded in 3-D ... who's to say?" Campbell asks.

Katzenberg has been laboring for years to start the 3-D revolution. The sticking point is money. It costs a lot to convert to digital projection, and 3-D equipment only adds to the tab. Theater owners say Hollywood studios should pay — at least for the basic digital setup — because studios will save millions per movie when they no longer have to make prints.

The studios are finally beginning to agree. And Katzenberg says theater owners are starting to see that they should help pay for upgrades, too. He says 3-D offers an "immersive" experience — and theater owners need to compete with the elaborate home theater that you might have in your living room.

Among those who doubt that 3-D will become the standard is Daniel Smith — who's an ardent fan of the technology. Smith works in visual effects and has a blog called 3D Fool.

Smith says 3-D should be used only when it's appropriate — not for cheap visual tricks, but to draw the viewer into a magical world, as it did in that 3-D version of The Polar Express. That was a "much superior" film in 3-D than it was in 2-D, Smith says.

But if every story is told in 3-D, he says, the experience "loses its specialness ... its freshness."

Smith thinks there will be no reason for most films to be made in 3-D. And many filmmakers won't have the budget to tell stories that way.

Katzenberg disagrees, saying similar arguments were made with the advent of sound and color.

In the year ahead, two big 3-D events are on the horizon. Katzenberg's animated film, Monsters versus Aliens, opens next spring. And James Cameron's highly anticipated sci-fi epic Avatar arrives in December 2009. Katzenberg believes there will be more than 5,000 theaters ready to show Avatar in 3-D.

Mike Campbell, for his part, thinks it will take several years to get to that number. He expects his chain — the biggest in the country, with 6,800 screens — will have about 1,500 of its theaters converted over the next three to four years.