Accessibility links
Writer Explains Particle Acceleration — In A Rap Kate McAlpine — or "Alpinekat" as she is known on the scientific rap scene — wrote and recorded a rap about the Large Hadron Collider in Geneva. Her music video has received more than 3 million views on YouTube. 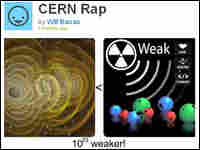 The Rap In Spanish

Designed with mind to send protons around

A circle that crosses through Switzerland and France

Two beams of protons swing round, through the ring they ride

'Til in the hearts of the detectors, they're made to collide

The Large Hadron Collider (LHC) will be shut down for at least two months because of damage to its cooling system, CERN, the European Organization for Nuclear Research, announced Saturday.

Scientists were still running tests when the damage occurred, so no particles have actually collided yet.

It's a setback for physicists and science fans everywhere — this was one of the most hyped experiments since Ben Franklin flew his kite in a lightning storm.

When scientists in Geneva turned on the particle accelerator earlier this month, the experiment produced one unexpected result — a smash hit physics rap, which has been viewed more than 3 million times on YouTube.

"I thought if we hit 10,000 we'd be doing really good," says Kate McAlpine, a science writer for CERN who is also known by her rapper name, Alpinekat.

McAlpine tells Andrea Seabrook she's been writing science raps for years. Before the LHC, she composed the N3UROCH!P rap, with lyrics like, "There are two kinds of neurons inside every brain. If they didn't work together, well, you'd prolly be insane."

She says making things rhyme is a skill that comes naturally to her.

"I couldn't freestyle rap, that's for sure, but if you just gave me a paragraph of information and said, 'OK, now re-explain this in verse, I could probably do it,'" she says.

Fans across the world have translated the lyrics, including Carlos Sicilia of Venezuela, who came up with a Spanish version — that still rhymes.