Accessibility links
Catholics In Vietnam Fight State In Land Dispute While church and state relations in Vietnam have improved over the past several years, disputes over land near the Thai Ha Church in Hanoi are threatening those gains. In the past few weeks, several parishioners trying to reclaim land have been arrested or detained. 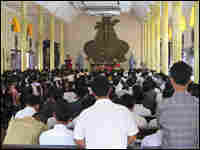 Parishioners gathered in the Thai Ha Church in Hanoi, Vietnam. The church is mobilizing its followers in a land dispute with the government. Many people at the service were bused in from nearby provinces. Michael Sullivan/NPR hide caption 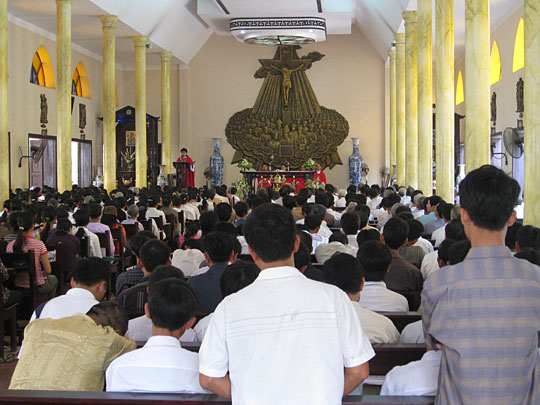 Parishioners gathered in the Thai Ha Church in Hanoi, Vietnam. The church is mobilizing its followers in a land dispute with the government. Many people at the service were bused in from nearby provinces. 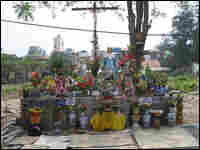 Parishioners erected a makeshift shrine on the disputed land next to the Thai Ha Church in Hanoi. Michael Sullivan/NPR hide caption 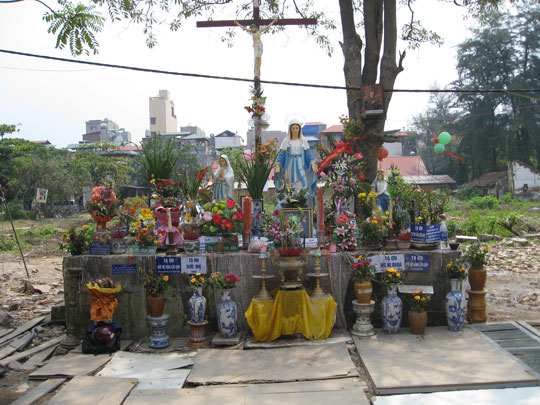 Parishioners erected a makeshift shrine on the disputed land next to the Thai Ha Church in Hanoi.

In communist Vietnam, there's a new skirmish in the long-standing conflict between the state and the Catholic Church.

There are an estimated 6 million Catholics in Vietnam — it's the second-largest Roman Catholic population in Southeast Asia after the Philippines.

While relations between the church and state have improved over the past several years, disputes over land are now threatening those gains. The church is locked in a bitter dispute with the state over land that both claim as their own.

At a midmorning Mass at the Thai Ha Church in Hanoi in mid-September, the windows were opened wide so that those sitting outside, fanning themselves in the sweltering heat, could listen in and take part. It was standing room only.

Midmorning Mass is not normal, but these are not normal times. The church is mobilizing its followers — and many people at the service were bused in from nearby provinces.

The priest said that the prayers were for their brothers and sisters who have been arrested or detained in the past few weeks. The priest said they were praying they will be freed and that the land that belongs to the church will be returned.

That land — a large vacant lot, recently razed, that developers are hungry to build on — is next door to the church. It's land the government says the church gave up voluntarily more than 50 years ago.

Last month, parishioners broke through a brick wall surrounding the lot and staked their claim to the land by erecting statues of the Virgin Mary, several crucifixes and other religious icons.

During the Mass in September, parishioners came to pray at the makeshift shrine, while about a dozen women sat under umbrellas off to the side chanting for peace. Plainclothes police were everywhere, busily snapping pictures.

"During the day, there aren't that many people here, but in the evening there will be thousands," says Nguyen Van Khai, 38, one of the priests. "They don't fear being arrested, or detained or dying. All they want — all we want — is justice, for the land that was taken from us to be returned."

The priest says last month police used tear gas and stun guns against some parishioners. The charges were denied by the police.

The vice chairman of the Hanoi People's Committee, Vu Hong Khanh, rejects any allegations of wrongdoing by the government and is adamant the church has no legal claim to the land.

"In the last month, we have confirmed that priests and parishioners from Thai Ha continue to ignore the law by inciting people to hold vigils and to reclaim the land near Thai Ha Church," Vu Hong Khanh says.

Criminal charges have been filed against eight parishioners now in police custody.

This is the second time this year that Vietnam's Catholics have openly challenged the government.

In January, thousands gathered outside St. Joseph's cathedral, the city's largest, demanding the return of land where the Vatican Embassy once stood. The vigils ended after the government and church officials agreed to sit down and discuss the issue.

On Sept. 18, government officials abruptly informed church leaders that the land would be turned into a park. Construction started the next morning. Church leaders were not amused, and they say they will keep trying to get the land returned.

It's not clear how either dispute will be resolved.

But the fact they've gotten this far is an indication of how much Vietnam has changed in the years since its leaders decided to embrace market reforms and court foreign investment.

The government is also more sensitive to world opinion than it was in the past. The Internet, too, is helping change and shape people's attitudes.

Those who directly challenge the party's legitimacy, and authority, are still ruthlessly suppressed. But other expressions of discontent are now tolerated more than in the past.

Factory workers can now strike for — and get — better wages. Disgruntled farmers can, and do, organize protests against what they see as unfair compensation for land seized by the state.

Nguyen Thanh Xuan, deputy chairman of the government's religious affairs committee, says the church and state may yet work out a compromise.

Vietnam doesn't have much land, he says, but it has four times as many people now as 100 years ago. So there's no question of returning any land to the church.

However, Nguyen Thanh Xuan says the government may consider reallocating some government land for the church to use, although not to own. But it would have to be done legally, he says, not the way they're acting at Thai Ha — where he says they're behaving like a mob.