Accessibility links
America Loses A Prized Rural Demographer Demographer Calvin Beale poured his life's energy into understanding rural America. He helped focus federal policy by visiting thousands of counties, often paying his own way to do so. He died Sept. 1 after 60 years of government work.

Residents would encounter a tall stranger with a thick white mustache and large glasses who seemed intent on learning all there was to know about their corner of America. Beale would then return to Washington with new ideas of what rural life is like — and how to improve it.

Beale died of colon cancer; his friends report that he had never retired and was sorry not to see more of America. 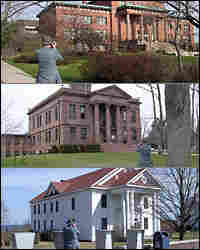 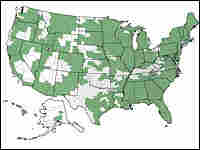 Where He's Been: With the help of a colleague, Beale maintained a map of the more than 2,400 counties he visited in five decades of work. Kathleen Kassel for Calvin Beale hide caption 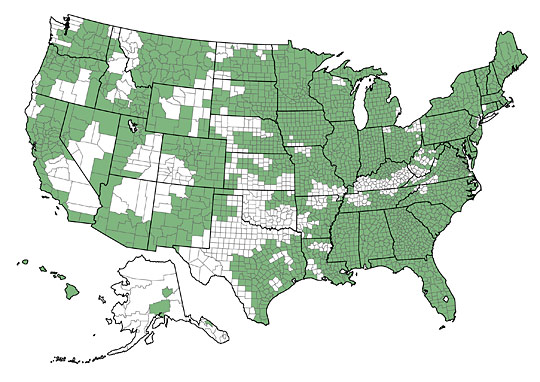 Where He's Been: With the help of a colleague, Beale maintained a map of the more than 2,400 counties he visited in five decades of work.

Five years ago, I traveled through rural Louisiana and Arkansas with Calvin Beale. He was conducting research. I was capturing the trip on film.

Calvin — a demographer at the Agriculture Department for 55 years until he died on Sept. 1 — had long since become a legend in rural research circles. He was in his late 70s and his work explaining rural America had influenced decades of legislation. During his career he visited 2,414 rural counties at his own expense, and his colleagues raved about his research trips; they were considered model fact-finding missions.

Calvin didn't really want me to tag along. He had a list of county seats to visit, roads to explore, people to interview — and fellow travelers meant more time between stops, more people to order lunch, more delays. He drove fast. Started early. Didn't waste time. Everything was just so — and you can imagine how he regarded a journalist who was constantly asking him questions.

Still, following Calvin Beale through rural America was like sitting at the knee of a storytelling grandfather.

Calvin would hate that analogy. He bristled at being called "an American treasure." He deflected notoriety. And he didn't consider himself old. His work was everything and he said if he stopped being able to "cut the mustard," he wanted his colleagues to show him the door.

Tell me, though, how you can watch the video clip we've included here and NOT regard Calvin Beale as an old storyteller whose vast knowledge of forgotten places was as precious as any American treasure? Who else can recite from memory the names of American towns that lost their county seat status to rivals while sitting in a folding chair in front of an abandoned storefront in Arkansas City, Ark. — a small town that continues to fend off its rivals?

In the end, Calvin treated me and my questions with patience and grace. And during our trip, I once asked him a vague question about cotton in the Mississippi Delta. It was a boneheaded inquiry, but I simply wanted to hear Calvin talk. About anything.

I wasn't disappointed. He took the bait and his story began with the local phone book. "Only one cotton gin and one cotton plantation were listed," he said. He'd flipped through the phone book the night before. "Their address was on the same road." Then he added a typical detail: "They were three blocks away from each other." "Now, the oil industry," he continued, "went on for several pages."

That was the genius of Calvin Beale's gumshoe research and storytelling approach: It wasn't always about the past. Calvin understood that everything about rural America's history — its immigration, population, migration, industry, geography, climate, government, even its phone books — had everything to do with America's present and, ultimately, America's future.

Consider Arkansas City. When Calvin and I were there in 2003, it was a sleepy place. He explained how a flood had knocked it off the Mississippi River in 1927. He told stories about regional commerce, about how Arkansas City struggled because it was "10 miles from anywhere."

Calvin also noted proposals to build a new interstate exit nearby. Local officials were promoting the area's hunting fishing, and hiking. And there was an effort to renovate the county courthouse. (He'd learned all of this from the town sheriff, a widow who'd driven Calvin around town.) Calvin wrapped up all this data nicely: Strong tourism might help Arkansas City bounce back from the 1927 flood and hold off its county seat rivals for good.

He was right. Five years after Calvin conducted his research there, a local official tells me Arkansas City is likely to be the county seat "for the next 100 years." They've just finished rebuilding the courthouse, and the Arkansas state Legislature recently passed new laws to help the area's tourism plans.