Accessibility links
Wall Street Trades In Fear — Literally Little known outside of financial circles, the volatility index, or VIX, gives brokers a sense of how frightened the market is. They even trade bets on whether the VIX will climb or fall. 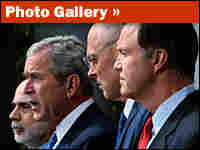 Somewhere in the Chicago Options Exchange building, tucked away from the noisy trading floors, sits a computer that digests the latest financial data. Every 15 seconds it calculates the human emotion known as fear.

"That's in fact what it measures," says Bob Whaley of Vanderbilt University's business school, who invented the fear formula.

It looks at what buyers and sellers are doing at any given instant and tries to figure out what they're thinking will happen to the stock market 30 days down the road, how far it might swing up or down.

The computer spits out a number called the volatility index, or VIX.

The details of Whaley's formula are complicated. The VIX gets its magic number by analyzing the price of a kind of insurance policy against stock market declines.

"What VIX measures, to some extent, is the amount people are willing to pay for insurance," he explained.

On Thursday, Whaley stared at numbers from a fairly nervous market. The VIX indicated people thought the stock market might go up or down by almost 9 percent over the next 30 days.

"They're scared — very scared. Not terrified," he said. "You have to put it in historical context."

In the market crash of 1987, the fear index was much higher, projecting stock market swings of up to 50 percent.

Another measure of market anxiety is called the TED spread, which in essence gauges how scared banks are that another bank might collapse. The "spread" is the difference between interest rates that banks charge each other and the interest rates the U.S. government pays on Treasury bills.

Jeff Frankel, an economist at Harvard, said that for years the TED Spread was tiny and steady and dull. "It always used to be very boring," he said, "so I never used to keep an eye on it at all. It's not boring now."

Sometime around June 2007, he remembers, the TED Spread shot up — and stayed high.

"You know, for it to shoot up temporarily is OK," he said. "But for it to stay up! It is really quite remarkable. It's one reason why people say this is the worst financial crisis since the Great Depression, because so far as I know this has not happened before."

Fear is a big deal on Wall Street. That's part of why policymakers are proposing a huge bailout of the financial industry now. They became worried that the markets were just too scared.

But Frankel says the real problem is that people weren't scared years before, as thousands of homebuyers took out mortgages they could never repay.

"Before any of this happened, many of us thought that the measures of fear were abnormally low," he said. "Why on earth was the VIX so low? It was as if people thought there was no risk in the world at all.

"I don't know if the amount of fear [today] is greater than is rationally warranted," he continued. "But I do know that everything that has happened could be described as the result of the fact that there wasn't enough fear for three years."

The fear index is not merely an indicator. The Chicago Exchange does a steady business trading bets on whether the VIX will go up or down. In these strange times, you can essentially buy and sell fear.