Accessibility links
Missile Defense System Aimed At Potential Threats A $60 billion missile defense system targets the potential threat from nations with intercontinental ballistic missile technology. Critics say much of the system will not work in the event of an actual attack. 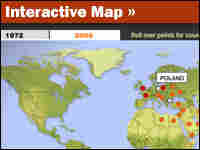 Since 2002, the Bush administration has spent more than $60 billion deploying a new defense program that has received little attention — the anti-missile defense system.

A complex system including missile interceptors and radar equipment located on U.S. soil and aboard warships, U.S. missile defense is set to go global with the involvement of both European and Asian allies. Yet critics say much of this system will not work in the event of an actual attack.

Find all the stories in the series here. 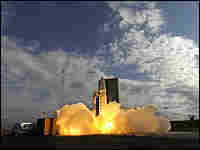 A long-range Strategic Targets System rocket is launched from the Kodiak Launch Complex on Kodiak Island, Alaska, on Sept. 28, 2007. The rocket was successfully intercepted by a Ground-Based Interceptor launched from Vandenberg Air Force Base in California as part of a Ballistic Missile Defense System flight test. U.S. Missile Defense Agency hide caption 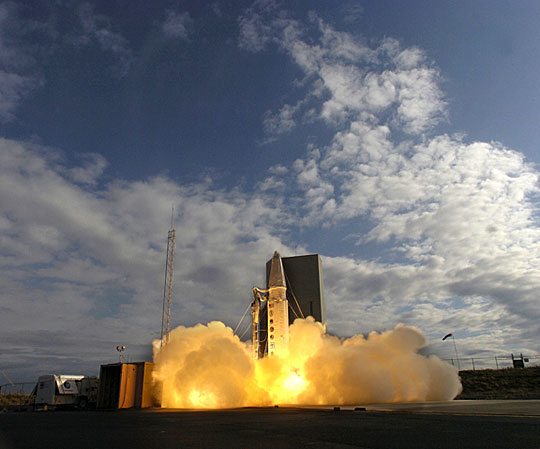 A long-range Strategic Targets System rocket is launched from the Kodiak Launch Complex on Kodiak Island, Alaska, on Sept. 28, 2007. The rocket was successfully intercepted by a Ground-Based Interceptor launched from Vandenberg Air Force Base in California as part of a Ballistic Missile Defense System flight test.

President Bush's administration has spent more than $60 billion since 2002 on the deployment of a defense program that has received little attention — the anti-missile defense system.

Active missile interceptors are in silos in the ground in Alaska and California; U.S. warships are equipped with missile interceptors and have been deployed to potential trouble spots around the globe; and a billion dollar high-tech floating radar station provides crucial early warning and tracking data.

Now, the system is set to go global with the involvement of both European and Asian allies, but critics say much of this system will not work in the event of an actual attack.

Proponents of U.S. missile defense believe the threat to the U.S. from the spread of ballistic missiles around the world is imminent and growing, and a Hollywood-style video on the Web site of the Pentagon's Missile Defense Agency depicts a variety of missile attack scenarios the U.S. might face now or in the future.

North Korea, Iran and potentially other hostile states are developing their missile capabilities. North Korea already has a nuclear weapon, and many believe Iran could acquire one in the not too distant future.

If those states or others also develop missiles that could reach the U.S., missile defense proponents say the U.S. must be able to destroy those hostile missiles before they reach American soil.

Since 2002, the Bush administration has deployed missile interceptors — four at Vandenberg Air Force Base in California, and 14 more, so far, at Fort Greely in Alaska that are housed in buried silos on several flat fields against the dramatic backdrop of the snow-covered Alaska Mountain Range.

Missile defense was a quest that began with a speech by President Ronald Reagan 25 years ago.

"What if free people could live secure in the knowledge that their security did not rest on the threat of instant U.S. retaliation to deter a Soviet attack?" Reagan said. "That we could intercept and destroy strategic ballistic missiles before they reached our own soil or that of our allies. I know this is a formidable technical task, one that may not be accomplished before the end of this century. Yet current technology has attained a level of sophistication where it's reasonable for us to begin this effort."

Reagan's Strategic Defense Initiative, quickly dubbed "Star Wars," got no further than the research laboratory — he was overly optimistic about the scope, pace and sophistication of the technology, and about the political firestorm his proposal would ignite.

But when President George W. Bush took office, he brought with him advisers that were convinced a scaled down version of missile defense must be deployed to confront the threat — not from Russia's huge arsenal of intercontinental ballistic missiles (ICBM), but from the isolated rogue states of the world, which were developing missiles and which, the reasoning went, could not be deterred from using them against the U.S.

"There could be groups that are either non-state actors or groups within a government, operating potentially outside the government, that wants to use this to strike a blow for their cause," says Lt. Gen. Henry Obering, the director of the Missile Defense Agency. "They would not be deterrable necessarily — they would not even concern themselves with retaliation, because they don't care. These are the kind of things we're trying to think through as we face the future."

The Missile Defense Agency lists more than 20 nations with missile capabilities now, arguing that the proliferation of this technology makes defenses more necessary than ever.

That was Secretary of State Condoleezza Rice's message when she traveled to Prague earlier this year to sign an agreement with the Czech Republic, beginning the expansion of the U.S. missile defense system to Europe.

"Ballistic missile proliferation is not an imaginary threat," Rice said. "As we know, the Iranians continue defiance of international obligations to suspend their enrichment and reprocessing, but they also continue apace in their missile development. So we need to be prepared for that threat."

But not everyone is convinced this threat justifies the billions of dollars spent so far.

"The Iranians like to brag about their missile program, to exaggerate their threat to puff themselves up," says Joseph Cirincione, an expert on missile proliferation and author of Bomb Scare: The History and Future of Nuclear Weapons. "U.S. officials are only too happy to take those exaggerations in order to justify the budgets for their anti-missile program. We're engaged in sort of a hype-hype rhetorical battle going on here."

In fact, the Iranians doctored a photo they released this summer that sought to cover up what might have been a failure of one of their missile test flights.

Cirincione argues that the proliferation of ballistic missiles is not as serious a threat as Rice, Obering and others make out.

Then there's the attack scenario itself: Would the leaders of North Korea and Iran be so insane as to launch one or two missiles against the U.S. with the certainty that, in the face of overwhelming American retaliation, they would be committing national suicide?

Richard Garwin, who has been a key adviser to many administrations over the years on issues involving nuclear weapons, doesn't think so. Garwin testified before a congressional panel earlier this year that the threat of attack with nuclear weapons is real, but not delivered by intercontinental ballistic missiles.

"A state wishing to deliver nuclear weapons to injure the United States homeland would far more likely use short range missiles or cruise missiles launched from a ship to attack U.S. coastal cities with nuclear weapons than use an ICBM for that purpose," Garwin says.

The Bush administration has been working hard to develop sea-based missile defenses, and the latest successful anti-missile flight test at sea involved the USS Lake Erie off Hawaii several months ago.

The deployment of U.S. missile defenses continues, as does the debate over its cost and capabilities. Obering views the missile defense system as an insurance policy.

"If we can prevent one attack — whether it be from another country, from a non-state actor, terrorist organization using these types of weapons — one attack on an American city — we would more than pay for this program many, many times over," Obering said. "And of course the prevention of the loss of life."