Accessibility links
Troubled Schools Turn Around by Shrinking Northwestern is one of the few large, comprehensive high schools left in Baltimore. Administrators hoping to boost flagging test scores are getting inspiration from schools that found success by becoming smaller and more career-oriented. 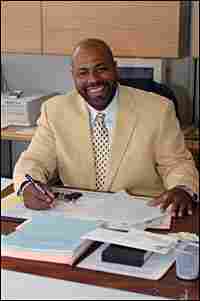 Jeffrey Robinson is the principal of Baltimore Talent Development High School, one of the schools likely to serve as a model for Northwestern High administrators as they revamp their troubled school. Baltimore Talent focuses on boosting basic skills by providing extra instruction to freshmen – because students who fail in ninth grade are very likely to drop out. Courtesy BTDHS hide caption

As the federal No Child Left Behind law comes up for renewal, NPR visits Northwestern High School in Baltimore, which has been failing testing requirements for years. Over the 2006-07 school year, we examine its struggle to meet the standards set down by the law. Read a series overview.

Forty years ago, former Harvard President James Bryant Conant argued that it made no sense to have thousands of small secondary schools. He pushed for the consolidation of those schools into big ones –- like Northwestern High School in Baltimore, where NPR has reported a series of stories this year.

Conant thought that big, comprehensive high schools were the best way to educate the hordes of baby boomers headed for high school and college. But four decades after Northwestern opened, the school is a dinosaur: It's one of only three remaining comprehensive schools in Baltimore.

Baltimore schools CEO Charlene Boston says the district is moving in another direction. Soon, she says, there will be no more "zoned schools." Instead, she says, Baltimore students will be able to choose their school, "understanding that they can go to the school that will help them implement their career options and choices."

Northwestern has struggled for years to improve test scores. It has made progress. The graduation rate has improved. And students can pick from four "schools within a school" that offer a career path in journalism, law or other areas. But it hasn't been enough.

Northwestern is supposed to become something like Digital Harbor High School, not far from Baltimore's revitalized inner harbor. A few years ago, it was called Southern High School, an old-style, comprehensive high school plagued by violence. The city spent millions to gut the building. They even renamed it, in order to exorcize the ghost of the old school and proclaim its new mission, as a technology academy.

In a basic technology class at Digital Harbor, each student works at a desktop computer. Beyond a diploma, students can earn a certificate that could help them get a job in the hi-tech industry. Principal Brian Eyer says technology motivates students who otherwise might drop out.

"Students want to come because of the gadgets," Eyer says.

"Once they're here, then we expose them to everything else."

The school looks great. Classrooms are well lit, halls are clean — no trash, no students wandering around. It's too soon to say whether achievement is improving, but last year, students did meet federal standards. Teachers at Digital Harbor say the school's advantage is its focus.

Keeping that focus won't be easy. Digital Harbor has wrestled with the school district over resources. Many students read well below grade level when they arrive at Digital Harbor, yet they're expected to absorb texts on computer programming. The school used to offer remedial reading courses, but the district cut the funding.

One argument for the comprehensive high school was economic: Those big educational shopping malls were supposed to cut back on administrative costs. That would allow them to offer Advanced Placement courses, a football team and arts programs, all under one roof.

"In a large high school, you're going to have more security guards, more coaches," she notes. She says smaller schools tend to be safer, so they need fewer staffers devoted to keeping order.

Legters is helping to run one of these smaller schools: Baltimore Talent Development High School.

BTDHS, as the school is known, has none of the glitz of Digital Harbor; it's housed in a huge, former junior-high complex in a rough neighborhood. It's clean and bright, thanks to a repainting job by the staff. The school focuses on boosting basic skills by providing extra instruction to freshmen — because students who fail in ninth grade are very likely to drop out. Principal Jeffrey Robinson attacks attendance problems by posting attendance numbers in the hallway.

Northwestern High, the big comprehensive high school, does exactly the same thing. But the results at BTDHS have been much more impressive. In fact, creating a new school — with a new ethic — boils down to simple things. Jasmine Harris, an 11th grader, says much of it comes down to Principal Robinson.

"Oh, yeah, Mr. Robinson keeps them in check," she says.

So what are the chances that Northwestern can be reborn as an effective, small, career-oriented high school? Allan Golston has spent years trying to reform high schools for the Gates Foundation. He says Northwestern already has one strike against it: It has a history to overcome.

Whatever the odds, Northwestern High School and others like it must embrace change. Baltimore hopes this will be the last year for its remaining comprehensive high schools.