Accessibility links
Dodd Vows To Act 'Quickly, Carefully' On Bailout As chairman of the Senate Banking Committee, Sen. Chris Dodd is among the lawmakers hammering out details of a historic financial bailout. Dodd, a Democrat from Connecticut, says that while Congress must act quickly, members must act responsibly as well and make sure taxpayers get relief. 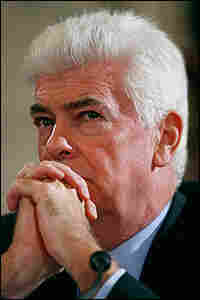 Out With One Era Of Regulation And In With Another

As chairman of the Senate Banking Committee, Sen. Chris Dodd, a Democrat from Connecticut, is among the lawmakers hammering out the details of the immense financial bailout now in the works. Dodd spoke with Linda Wertheimer about the process.

Wertheimer: Will the Democrats insist on providing relief for homeowners?

Dodd: We've been working all weekend, Democrats and Republicans up here together — people need to know that — in a very positive and constructive environment. That's number one. Number two, I think we're very grateful that a man like Hank Paulson is in the job he's in. He's a very knowledgeable man, he understands financial services, and I think the country's lucky to have someone of his talents and abilities there. Thirdly, we need to act quickly; there's no question about that. We also need to make sure the secretary and his team have the authority they need in order to do what needs to be done.

Having said that ... I don't think the American public will be shocked to hear that when you ask for $700 billion, demanding some accountability, transparency, some oversight of this is essential. That's number one. Number two, we want to make sure the taxpayers are the first in line. As these assets get sold and money comes back, we want to make sure the treasury – the taxpayer – is the first in line getting relief. And thirdly, as you've heard people say, including the secretary of the treasury and the chairman of the Federal Reserve, the core cause of the problem that persists to this day is the housing crisis – 9-to-10,000 people every day are going into foreclosure. And so there needs to be something, a part of this plan that will offer some relief for that — or we'll be back here next month with some variation of this plan and we don't need to have that happen. That's not in any way to deprive the secretary of his authority, or [his ability] to act quickly. But quickly is not the most important issue, it's acting responsibly as well and I'm confident we can do that.

There seems to be some tension here between the Treasury Secretary and his sense of what is a clean bill and the Congress — the Democratic Congress — and what you all believe is necessary.

Dodd: I spent quite a bit of time last night with my colleague from Alabama, Sen. Shelby, who is the ranking Republican on the banking committee. I ran into Mel Martinez of Florida, the Republican senator from that start. I've talked to others here. This isn't just Democrats. This isn't a natural disaster like the Gustav hurricane. This is a man-made, avoidable, preventable problem ... and a lack of oversight and accountability was one of the problems.

One of the things that people have suggested is that maybe CEOs of these failed companies should not get big payouts.

If you ended up with a story here that senior executives of some of these failed businesses were going to get golden parachutes, you'd have a major problem. There has to be something in here that is also going to reassure people that we're not going to be lining the pockets of people who contributed to the very failure we're talking about.

Do you think this bailout package is too important, too big to fail? Are you going to have to let some of these things go in order to get it passed, and passed quickly?

No, no. Be careful here. There isn't a second act here. This is not one where if this doesn't work we've got Plan B. This is Plan A, B, C — it's all of them. So this needs to be done quickly, but carefully. And Americans expect us to do that up here. They want us to help and get this done, but the last thing they'd like us to do is to rush something through without having taken the deliberate steps to make sure we're thinking about this. That can be done. We can do both here and I'm confident we will.

You don't have too much time because you're about to recess for the elections. Do you have any concerns about how much power this one man, the treasury secretary, Henry Paulson will have, absolute control over spending $700 billion?

It isn't just this one man. We've got an election in about 40 days, in which we're going to choose a new president of the country. And I presume there will be a new secretary of the treasury in about 50 or 60 days. So it isn't just this man, but someone none of us know anything about — we don't even know who it is — who will be assuming the bulk of responsibility for handling this for the next two or three years. So the reason why we want to build in here some accountability and oversight into this process, so we can be careful, is because, frankly, we're in uncharted waters. I know this sounds like a lot of people bickering ... it really isn't that much. We're talking about some basic essentials that any responsible Congress, any responsible government, would insist upon. You just can't turn [$700 billion] ... that's twice the cost of the Iraq war. To turn that kind of money over to one individual — to someone who none of us even know who it is yet — without demanding some of this accountability, would be a mistake.