Accessibility links
Black MBAs React To Wall Street Crisis The economic downturn is affecting all types of businesses. To find out how businesspeople of color are dealing with the crisis, Tell Me More swung by the 30th annual conference of the National Black MBA Association. 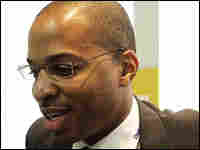 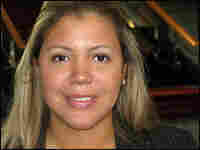 Shelby Akins works in the health care field, but has friends who are directly affected by the financial crisis. Lee Hill/NPR hide caption

What do you think about the proposed $700 billion bailout? 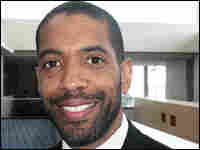 Last week, as the Federal Reserve and the U.S. Treasury began thinking about how to rescue the nation's financial institutions after a massive Wall Street meltdown, the National Black MBA Association held its annual conference in Washington, D.C. Tell Me More sent producers to the gathering to hear from attendees how the recent shakedown is affecting their prospects in the industry.

Chris Stokes, who has a background in finance, is on the hunt for a new job. Stokes says asking questions about how the recent crisis will affect his industry has already become an important part of his job interviewing process. But the Indiana resident says the risk incurred by joining a prominent financial firm during shaky times is not necessarily a deal-breaker.

Shelby Akins, however, works in sales for a medical device company, a relatively recession-proof industry. Although Akins seems comfortable that the recent troubles won't affect her bottom line, not everyone in her professional circle can say the same.

"I have friends that worked at hedge funds ... and they're now trying to get into sales positions, and they still have to start from the bottom layer," Akins says.

But people like Paul Charles have already begun to see firsthand how the woes of Wall Street are bringing distress to Main Street. Charles leads the Houston chapter of the black MBA group and heads a community development corporation in the area.

"We've actually had some families that were actually at the point. [They] had job history, had credit history, had the down payment, had picked out the realtor, were picking out the house and ... [then] lost the job," Charles says.

Treasury Secretary Henry Paulson is asking Congress to devote $700 billion to help curb the impact of Wall Street's meltdown on the financial market. If passed, the bailout package could be the biggest government rescue of private industry in U.S. history. And there is intense pressure on Congress to act swiftly to approve Paulson's plan and ease growing tension.