Accessibility links
What Goes Into Naming A New Species? A Lot : Krulwich Wonders... When someone finds an animal, vegetable or mineral new to science, the discoverer gets the privilege of giving it a name. Most of the time, it's done soberly, responsibly and carefully -- but not always. 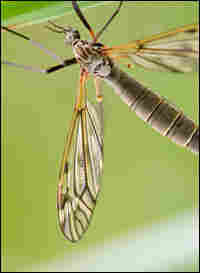 An American scientist named Charles Paul Alexander is said to have named 10,000 species of crane flies, like the one above. iStockphoto.com hide caption 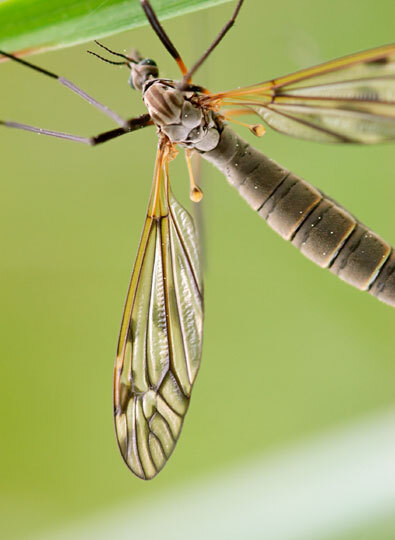 An American scientist named Charles Paul Alexander is said to have named 10,000 species of crane flies, like the one above.

There wasn't a whole lot to do in the Garden of Eden, as the Bible tells it. Adam, the original resident, just bided his time, snacked when he felt like it, avoided one particular tree, and hung out. Except once -- just once -- he was given an assignment: to name a vast array of "beasts of the field," plus "fowl of the air," after which, presumably, he rested. And people have been naming creatures ever since.

In the 1700s, the Swedish scholar Carl Linnaeus created a new way to classify creatures that is still in use today, genus plus species. He classified thousands of organisms.

But the all-time record may go to an American insect scientist by the name of Charles Paul Alexander, who specialized in crane flies. I'm not exactly sure what a crane fly is, but apparently they come in many, many flavors; Alexander is said to have named more than 10,000 species.

The rule is that anytime someone finds an animal, vegetable or mineral new to science, the discoverer, like Adam, has the privilege of giving it a name.

Most of the time, this is done soberly, responsibly and carefully -- but not always. Linnaeus, for example, punished a critic by naming an ugly, insignificant weed after him: Siegesbeckia.

Richard Fortey, senior paleontologist at the Natural History Museum, tells of a colleague named Rousseau H. Flower who despised Communists and Communist Party chiefs, so he named a worm he discovered, Khruschevia Ridicula, after former Soviet leader Nikita Khrushchev. On the other hand, Fortey had a friend who loved the '70s punk band The Sex Pistols and named some ancient trilobite species after Sid Vicious and Johnny Rotten: Sid viciousi and Johnny rotteni.

A bug scholar and lover of the ladies, G.W. Kirkaldy used his naming rights to celebrate his romantic conquests. He discovered a variety of plant insects that he named using the Greek suffix "chisme," pronounced "kiss me."

Kirkaldy then put "chisme" behind a long list of his girlfriends, so today there are bugs named Polychisme, Marichisme, Dollichisme -- it's quite a long list.

In 2005, a beetle fancier, professor Quentin Wheeler, and his student Kelly Miller named a bunch of slime mold-eating beetles after President George W. Bush and some prominent members of his Cabinet: Agathidium bushi, A. rumsfeldi and A. cheneyi.

Some of Wheeler's liberal colleagues assumed that this was not a compliment -- slime, after all, being slime. But Wheeler says he's been a lifelong Republican, and to prove his good intentions, he named one of the beetles after his wife.

One day, Wheeler was sitting in his office as Keeper of Entomology at London's Museum of Natural History -- he'd moved to Britain for the job -- when the phone rang. A female voice asked him to hold on for the president of the United States.

Bush said he was honored; Wheeler blushed -- as well he might, because he had named another beetle in the series, a small, black one with a helmet-like head, A. vaderi, after Darth Vader, Dark Lord of Sith.

When you name beetles, you can honor whom you please.

Richard Fortey's new memoir, Dry Storeroom No. 1: The Secret Life of the Natural History Museum, contains many of these stories. Fortey spent most of his life in London's world famous museum, and he writes about scientists, rocks, gems that carry curses, enormous diamonds, dinosaurs, trilobites (ancient sea creatures that Fortey studied) and very, very odd colleagues.

Naming Species Before They Disappear March 8, 2008