Accessibility links
Burning Spear: Reggae On Course Reggae music has gone a lot of places over the years, from minimalist dub to culture-warring dancehall. Almost 40 years on, Spear still hews to the reggae basics: a deep, easy groove; brassy R&B flavorings; and a mystical take on history. His new CD is Jah is Real. 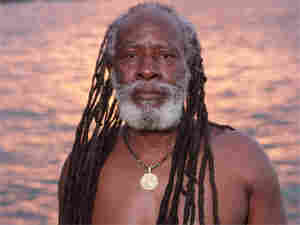 In 1969, upstart reggae singer Bob Marley introduced a friend from his hometown to one of Jamaica's top record producers. The friend's name was Winston Rodney, but the world would soon know him as Burning Spear. Now a gray-beard reggae veteran, Burning Spear has a new CD called Jah is Real.

Reggae music has gone a lot of places over the years, from minimalist dub to culture-warring dancehall. Through it all, Burning Spear has never veered from his course. Almost 40 years on, he still hews to the reggae basics: a deep, easy groove; the brassy R&B flavorings; and a mystical take on history.

In "700 Strong," he describes a joyful party at the home of iconic black nationalist Marcus Garvey. Back in the '20s, Garvey's prophecies inspired the Rastafarian religion. And Garvey's ghost, along with an Afrocentric, Rasta worldview, have been constants in Burning Spear songs.

On "Wickedness," he wields the archaic, biblical language he loves. Interesting that in this case, he's not calling down oppressors or warmongers, but rather music moguls who have been exploiting reggae artists. On Jah is Real, his verbal jousting is mostly aimed at personal foes, not the grandiose evildoers of more political reggae. Even on the album's toughest song, "You Were Wrong," his tone is more avuncular than angry.

Much of this album has the feeling of a victory lap. Over the years, Burning Spear has often been overshadowed by all the new voices and trends in reggae, but his core audience has never abandoned him, a fact he proclaims joyously on the song "Step It."

Listening to Jah is Real, it's hard to resist his infectious pride. Against heavy odds, this is one public figure who can actually sell the idea that more of the same is better than change.